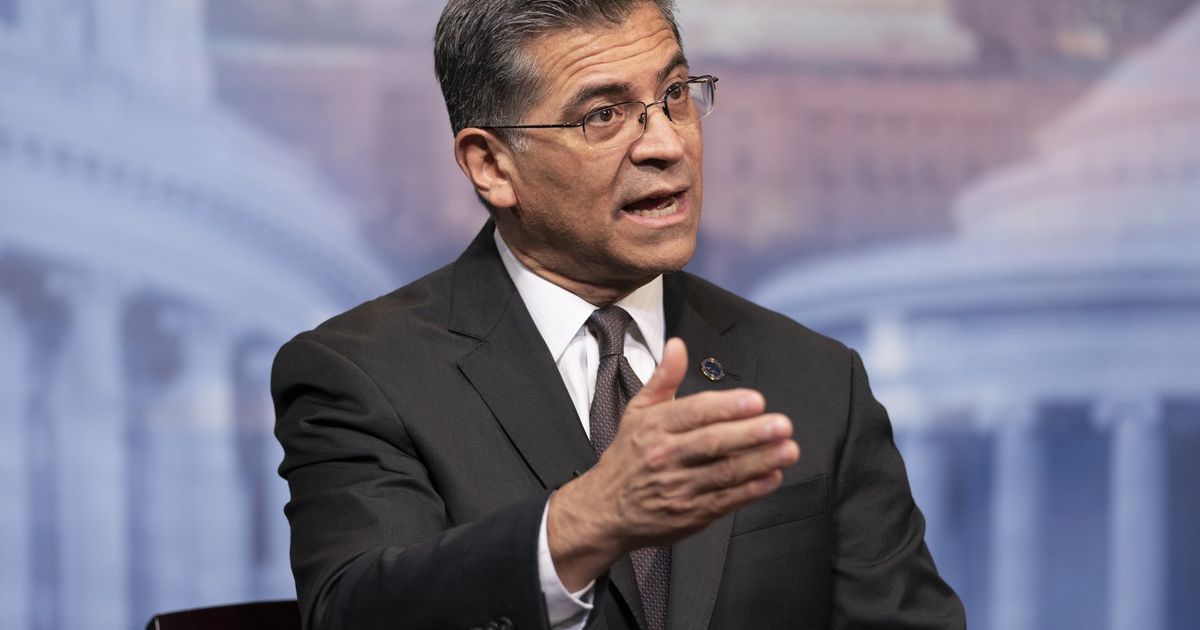 MANCHESTER, N.H. — Xavier Becerra, the health and human services secretary, walked into a Boys & Girls Club in Manchester earlier this month without a mask, one of his first public appearances with his face uncovered. He felt “a little bit of anxiety” about it, he confessed, even though coronavirus caseloads had plummeted.

“We can’t let things slip,” Becerra said, noting the potential for new variants and the many Americans still at risk for severe COVID-19. Referring to himself, he added: “You’re the captain of the ship; you’re the last one off. So are we there? No, not everyone’s off the ship.”

Becerra has been sailing in rocky seas, battered by criticism that he appeared disengaged from the Biden administration’s pandemic response. Now he is seeking a reboot, aware that his tenure will be defined by how he handles the fallout from the pandemic, including the many ways it has affected Americans’ health and the health care system.

At the moment, he faces a big problem: His department is out of money to pay for tests, therapies and vaccines, even as many public health experts anticipate a resurgence of COVID in the fall if not sooner.

This week, the White House made clear that it wants to retain control of the coronavirus response, rather than delegate it to Becerra; President Joe Biden picked Dr. Ashish Jha, the dean of Brown University’s School of Public Health, to replace the current coronavirus coordinator, Jeffrey Zients, who is leaving. The announcement came just days before Becerra, a former congressman and California attorney general who is also the nation’s first Latino health secretary, marked his first anniversary on the job with a “State of the Department” news conference Friday.

But the White House does want Becerra to leverage his connections on Capitol Hill; he has a good relationship with a key Republican, Sen. Roy Blunt of Missouri, the ranking member on the subcommittee that controls health spending. Becerra has been working furiously — so far to no avail — to persuade his former colleagues in Congress to approve $22.5 billion in emergency coronavirus relief.

More on the COVID-19 pandemic

“He’s got the relationships; he knows what it’s like to be in their shoes,” Zients said in an interview, adding that Becerra is “central to making the case and securing the funding.”

Even in the unlikely event that the United States sees no more punishing virus waves, the effects of the pandemic will be felt for years — and the Department of Health and Human Services will play a central role in addressing them. There are an estimated 11.1 million Americans living with “long COVID,” suffering lingering symptoms that interfere with school or work. As of December, nearly 170,000 children had lost parents or caregivers to COVID-19. Overdose deaths and adolescent mental health crises have also increased sharply during the pandemic.

A lawyer by training, Becerra has long fought to improve access to health care. He helped pass the Affordable Care Act when he was in Congress, and he later sued the Trump administration more than 100 times for failing to enforce it. He is less knowledgeable about infectious disease, which has raised questions about whether he might be the right man for the job — at the wrong time. His defenders disagree.

“I think that passion of his for expanding access and looking out for truly vulnerable people is absolutely going to be enormously helpful as we move forward,” said Kathleen Sebelius, who served as health secretary to former President Barack Obama and meets with Becerra from time to time. “I think he’s the right secretary for now.”

During his trip to New Hampshire, a state hit hard by the opioid epidemic, Becerra’s focus was on strengthening mental health — a top priority for Biden.

The Boys & Girls Club of Manchester was one of three stops that day; he also dropped in on a Planned Parenthood clinic and a community health center.

The club has mental health counselors, but Diane Fitzpatrick, the club’s CEO, said she wished she had the money for a full-time social worker.

“Many of our children are two years behind because of this pandemic,” she said, adding, “I’m seeing a lot more behavioral issues with our younger children.”

Becerra is sympathetic; he began his legal career as a public interest lawyer in nearby Massachusetts, working on cases that involved people with mental health challenges. In a brief interview with local TV reporters, he said the administration was committed to equating mental health with physical health.

“Get ready, America,” he declared. “We’ve got your back.”

Yet in interviews between stops, when asked about the challenges ahead, Becerra kept coming back to the pandemic. If Americans are ready to put it behind them, he is not. He said his department would “continue to push vaccination,” because that is the best way to prevent infection, and much cheaper than treating people after they get sick.

He wants to “repair the cracks in our public health system,” and improve telemedicine, which could require improving broadband access in underserved areas. And he wants to “close the black holes” — by which he means the racial disparities in health and access to care that COVID-19 so painfully exposed. Becerra has backed the idea of single-payer government insurance, known as “Medicare for All,” which puts him to the left of Biden.

“In talking to some of my international counterparts, they ask us questions about how is it that we could miss so many people?” he said. “To them, these issues are nonexistent because they have a wide net in their public health care system — they have that universal coverage. We saw the gaps that occur when you don’t have universal coverage.”

At 64, Becerra has a soft-spoken manner. Several current and former administration officials said that he had played a limited role in setting pandemic policy, and did not step in to resolve conflicts between the strong-willed doctors who lead some of the agencies — the Food and Drug Administration, the Centers for Disease Control and Prevention, the National Institutes of Health — he oversees.

His critics say that has led to confusing messaging that has at times hindered the pandemic response — an assertion Becerra’s office disputes.

“He’s like, a ghost,” Dr. Eric Topol, founder of the Scripps Research Translational Institute, said in an interview in January. “‘Oh, is there a pandemic? Oh, really? Oh, there’s infighting among my agencies. Oh, really?’ He’s done nothing.”

But Blunt says Becerra has been unfairly blamed. He notes that the Biden White House took charge of the pandemic response before the Senate confirmed Becerra last March, putting Zients in charge.

“When everything is going well, we’ll see CDC and the White House getting credit,” Blunt said, “and when something goes bad in the COVID area, then suddenly it’s Secretary Becerra, who as best I can tell has had no real leadership opportunity in the COVID space.”

Becerra does oversee the execution of important federal responsibilities related to the pandemic, including purchasing vaccines and therapeutics and shipping them to the states. But his low profile last year, coupled with critiques like Topol’s, spawned a spate of negative news articles, which prompted the White House to try to shore him up.

The president called Becerra in February, he said, to tell him: “You’re part of this team. Don’t listen to any of that stuff.” He traveled with both Biden and the first lady, Dr. Jill Biden. Earlier this month, he made his first appearance at a White House briefing, to announce the president’s new coronavirus response plan. And Becerra has lately been playing a greater role in the response; he participated in three White House events this week and now regularly attends video calls with the administration’s top doctors.

“I’ve never been one who’s necessarily trying to jump into the middle of that photograph, and so perhaps I haven’t been as visible as others try to be,” Becerra said. “But I just figure, I’m getting to run the largest agency by dollar amount in the federal government. Why am I going to complain about that?”

In fact, the Department of the Treasury, with a $3.8 trillion annual budget, is the largest by dollar amount. The Department of Health and Human Services, with $2.1 trillion in annual funding, is second. The sprawling agency has 11 operating divisions, including one that handles refugee resettlement — another challenge for Becerra.

He arrived on the job to confront a crisis of unaccompanied children at the border; record numbers were crammed into Customs and Border Protection’s detention facilities, sleeping side by side on mats with foil blankets. It was an embarrassment for Biden, who had campaigned on compassion for immigrants.

Politico reported at the time that the White House was dissatisfied with Becerra’s handling of the crisis, quoting an unnamed senior administration official saying that he had a “steep learning curve.” In an interview late last year, with the crisis under much better control, Becerra objected to the characterization.

“It wasn’t a steep learning curve; it was: I was about to see the tidal wave come on, and we had to ride the wave,” he said. “And not only did we ride the wave, I think we tamed it.”

A son of immigrants, Becerra was raised in Sacramento, California, where his father fixed railroad cars and did construction work. His mother was a clerical worker. He was the first person in his family to attend a four-year university — Stanford. His law degree is from Stanford as well.

In his native California, word is that Becerra might be eyeing a run for governor. He did not say he would, but neither did he rule it out. He noted that he left the attorney general’s job to return to Washington, leaving his wife, an obstetrician-gynecologist, back in his home state.

“I gave up a really great position to do this,” he said, “and I’m not looking back.”

More on the COVID-19 pandemic

This story was originally published at nytimes.com. Read it here.