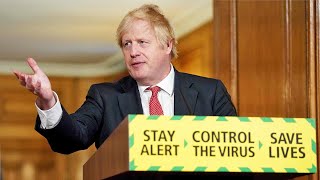 After first announcing the changes, the Government was forced to correct even its most senior ministers in their interpretation of the rules, but speaking on Tuesday morning Mr Hancock insisted that there was no confusion.

He told BBC Breakfast he knew the situation was “frustrating” but added: “For some people’s livelihoods, they need a childminder in order to earn an income and so it is important we allow that to happen.

There is also confusion over the difference in rules between the four nations of the UK, with the devolved administrations in Scotland, Wales and Northern Ireland making clear they were not yet ready to follow Westminster in relaxing lockdown.

Police chiefs in Wales have called for harsher fines, starting at £1,000, in order to deter people from breaking the rules.

Arfon Jones, Plaid Cymru’s police and crime commissioner in North Wales, claimed Boris Johnson’s unilateral easing of the lockdown in England was a “total shambles” and the Prime Minister had created “utter confusion” by saying people in England would be allowed to travel outside their local area for exercise. Travel restrictions remain in place in Wales.

Since the announcement of the change of rules in England, one of the biggest caravan parks in North Wales said it had been inundated with people wanting to come on holiday.

Laurie Clark, the general manager of Golden Sands, in Rhyl, said: “Some people just couldn’t understand it, and were questioning it as they said Boris Johnson was the Prime Minister of the UK so why would it be any different in Wales?”

The change from “Stay Home” to “Stay Alert” is the first step in a gradual easing of lockdown measures, and the Government’s Scientific Advisory Group for Emergencies (Sage) has been asked to look at the idea of a New-Zealand style “bubble” plan in the coming weeks.

“Before we reach any decisions on what has been described as the ‘bubble’ plan, we would need to look at what the impact would be on the overall infection rate and on ‘R’,” the Prime Minister’s official spokesman said.

“This is all highly conditional, we will only be able to take the second and the third step if everybody follows the rules on social distancing and we are able to keep the infection rate under control and the ‘R’ rate down below one.”