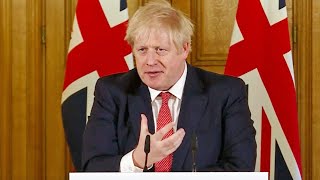 All Britain’s pubs, restaurants, cafes, cinemas and gyms were ordered to close on Friday night as Boris Johnson introduced the most draconian measures yet “to keep people apart” in an attempt to halt the coronavirus surge.

In a dramatic televised announcement, the Prime Minister waged war on “unnecessary social gatherings” across the UK. He said the steps were “extraordinary” but critical in order to save thousands of lives.

The closure of pubs and bars and also leisure centres, theatres, nightclubs, museums and galleries went far further than had previously been thought and underlies the growing coronavirus crisis engulfing the country.

The Government had been relying on the public to voluntarily curtail nights out, but the speed of the spread of the virus prompted Friday’s intervention, the most severe to date.

Mr Johnson said the target was to reduce social gatherings by 75 per cent to reduce the impact of the pandemic and ease pressure on the NHS.

He said the authorities could use existing licensing laws to enforce the ban but added that he expected venues to carry out closures without being strongarmed into doing so. Emergency legislation, set to be introduced in the coming days, would however give Government further powers if pubs and clubs tried to flout the lockdown.

The closure of Britain’s pubs, restaurants and cafes went further than had been briefed earlier in the week, when the crackdown was seemingly planned only for London.

It was supported by Sadiq Khan, the capital’s Mayor, who had been locked in talks with Mr Johnson on Thursday. Mr Khan said: “I want to make a direct appeal to everyone – act immediately on the expert advice. I support the decision to close pubs, bars, cafes and restaurants, nightclubs, theatres, cinemas and gyms.

“If you ignore this, people will die as a result.”

The military remains on standby to assist the authorities, with General Sir Nick Carter, the Chief of the Defence Staff, issuing a letter to senior officers telling them to treat the battle against coronavirus as a six-month operational tour.

General Carter wrote: “The indications are that this disease will spike around late May and early June. We are to be prepared for our collective posture to be on an operational footing by mid-April, recognising that this could endure for six months or so.”

Mr Johnson stopped short of ordering the shutdown of “non-essential” shops such as clothing stores, but sources suggested such closures could take place in London by early next week.

The Prime Minister also declined to introduce travel restrictions but, having made incremental steps over the past five days, there will be anxiety that those could follow.

At his press conference on Friday, he said: “I do accept that what we’re doing is extraordinary – we’re taking away the ancient inalienable right of freeborn people of the United Kingdom to go to the pub, and I can understand how people feel about that.

“But I say to people who do go against the advice that we’re getting, the very clear advice that we’re getting from our medical and scientific experts, you know you’re not only putting your own life, the lives of your family, at risk – you’re endangering the community, and you’re making it more difficult for us to get on and protect the NHS and save lives.

“And if you comply, if people comply as I say, then we will not only save lives, thousands of lives, but we’ll come out of this thing all the faster.”

Mr Johnson said “our eventual recovery depends entirely on our collective ability to get on top of the virus now” and added: “That means… we need now to push down further on that curve of transmission between us.”

He said the measures would be reviewed monthly, but in reality compulsory nights in for Britain’s 67 million people are now the new normal. Mr Johnson told pubs, clubs and restaurants on Friday that the shutdown would commence “tonight, as soon as they reasonably can”, and told them “not to open tomorrow”.

The landlord of one pub in Weston-Super-Mare said he would allow customers to “finish their pints and eat their meals” before shutting the doors when the evening “got quiet”, but there was evidence that some pubs were going to turn Friday night into a last hurrah, against Mr Johnson’s guidance.

The Prime Minister warned pubgoers: “You may be tempted to go out tonight, and I say to you please don’t – you may think that you are invincible, but there is no guarantee that you will get only mild symptoms. But you can still be a carrier of the disease and pass it on. We want you, as far as possible, to stay at home, and that is how we can protect our NHS and save lives.”

The measures will turn Britain’s most vibrant cities into ghost towns. Officials were increasingly alarmed that London had become a “city of superspreaders” and urged a mandatory ban, now extended across the UK.

Well-placed sources had warned the London shutdown alone would be “catastrophic”. Millions of people work in the tourism, hospitality and leisure sector, which has been wiped out by the pandemic.

By next week, it is expected that non-essential shops will also be forced to close, leaving only supermarkets, smaller food stores and pharmacies remaining open.

On Friday, dozens of major stores announced they were closing anyway. Harrods said it was closing its store from 7pm on Friday but would keep its food halls and pharmacy open.

Managing director Michael Ward said: “Harrods has gone through many challenges during its 170-year history. We continued to trade and serve our customers during World War Two, and only closed for a short period of time after the car bomb attack of the 1980s.”

Selfridges said it was shutting its doors in London, Birmingham and Manchester “with a heavy heart” while Swedish furniture giant Ikea closed all its stores around the UK from 6pm.

The Arcadia Group, Sir Philip Green’s retail empire which includes Topshop, Dorothy Perkins and Miss Selfridge, also announced that it was shutting all its stores “until further notice” and with immediate effect.

London’s transport network reduced its services and closed stations earlier this week to try to discourage non-essential workers from using the Tube. Further drastic cutbacks will be put in place by Monday.

On Friday, Transport for London (TfL) began loudspeaker announcements at all its operating Tube stations which say: “All TfL services are now solely focussed on ensuring critical workers can move around as needed. You should not be using public transport or travelling for anything other than essential journeys.”

The forced closure of pubs came after some chains had tried to make a last-ditch stand to keep going.

Tim Martin, the founder and chief executive of the JD Wetherspoon chain, had said earlier on Friday that the closure of pubs was “over the top” and called for a “sensible balance”, adding that his pubs had instituted social distancing measures that included not standing at the bar.

Mr Martin, a Conservative Party donor, claimed his pubs posed less risk than supermarkets. Wetherspoon’s operates 874 pubs across the UK, each employing an average of 40 staff.