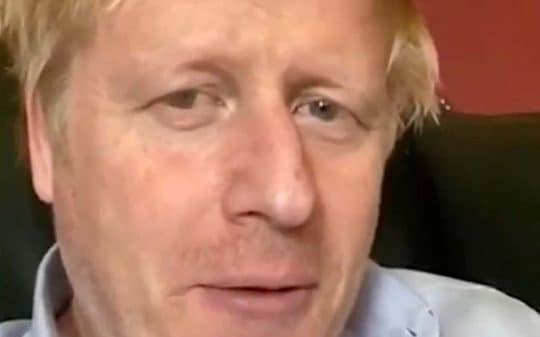 Boris Johnson was last night moved out of intensive care as No 10 said he was in “extremely good spirits”. The Prime Minister is in the “early phase” of recovery, a Downing Street spokesman said, as Mr Johnson was moved back to a low-dependency ward at St Thomas’ Hospital, London.

He had spent the past four days in intensive care after being admitted to the hospital on Monday night. Downing Street said he would now receive “close monitoring”.

Politicians across the Commons last night sent their good wishes, while Donald Trump, the US president, said: “Great News: Prime Minister Boris Johnson has just been moved out of Intensive Care. Get well Boris!!!”

Sir Iain Duncan Smith, a close ally of the Prime Minister, told The Daily Telegraph: “The oxygen and the rest has worked and his body is fighting back. It is unalloyed good news. I was plodding around the constituency earlier talking to businesses, social distancing of course, and the butcher I went to was in tears. He was so worried about Boris. In a peculiar way he has epitomised what others have gone through. He’s becoming a touchstone for the British resilience and will ultimately come out of this.”

Sir Keir Starmer, the Labour leader, added: “This is good news. I hope it is the beginnings of a speedy recovery.” Liz Truss, the International Trade Secretary, said: “Brilliant news” while Matt Hancock, the Health Secretary, said: “So good that the Prime Minister is out of intensive care and on the road to recovery.”

It came after senior ministers convened a Cobra meeting to discuss the process of reviewing the lockdown. Dominic Raab, who is deputising for the Prime Minister, said it was “too early” to start lifting the measures put in place nearly three weeks ago and refused to commit to explaining what needed to happen before the lockdown was lifted.

He suggested ministers would not even start reviewing the measures until the end of next week. A Government source said the lockdown would continue until the public was told otherwise, adding the message to people was: “This weekend stay at home, and next week stay at home.”

Speaking at Downing Street last night, Mr Raab told the public “we must keep going” with the lockdown.

He said: “It’s been almost three weeks and we’re starting to see the impact of the sacrifices we’ve all made. But the deaths are still rising and we haven’t yet reached the peak of the virus. So it’s still too early to lift the measures that we put in place.”

Asked whether the Government would explain to the public what evidence it was looking to see in order to start ending the lockdown, Mr Raab said: “We will make the right decisions at the right moments and will be guided by the science.”

Speaking after the Cobra meeting, Mr Raab said figures were still being gathered on the impact of social distancing and the closure of many businesses, which would be analysed by the Government’s Scientific Advisory Group for Emergencies.

He added: “We don’t expect to be able to say more on this until the end of next week.” Announcing his plan on March 23, Mr Johnson told the nation: “We will keep these restrictions under constant review. We will look again in three weeks, and relax them if the evidence shows we are able to.”

However, on Thursday night Mr Raab said: “The measures will have to stay in place until we’ve got the evidence that clearly shows we’ve moved beyond the peak.” He urged the public not to take its “eye off the ball” and visit family members or sunbathe during the Easter weekend.

It came as Sir David Lidington, Theresa May’s de facto deputy prime minister, told Chopper’s Politics podcast ministers should be more “open” about communicating the choices they were facing when they decided whether to lift or extend the lockdown.