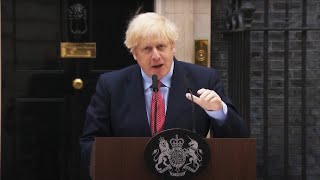 Business leaders, meanwhile, begged the Government for clarity over what will happen so they can plan ahead.

On his first full day back at work since recovering from Covid-19, Mr Johnson made a surprise address to the nation outside Number  10 and said the UK was “making progress” thanks to the “grit and guts” of the population during lockdown.

He said there were “real signs now that we are passing through the peak” and “beginning to turn the tide”, adding that, if coronavirus were a mugger, “then this is the moment when we have begun, together, to wrestle it to the floor”.

In a direct address “to British business, to the shopkeepers, to the entrepreneurs, to the hospitality sector, to everyone on whom our economy depends”, he said: “I understand your impatience … I want to get this economy moving as fast as I can.”

Mr Johnson said Britain was “coming now to the end of the first phase of this conflict” and that, in the coming second phase, he would “begin gradually to refine the economic and social restrictions and, one by one, to fire up the engines of this vast UK economy”. He said he would be “saying much more about this in the coming days”.

The Prime Minister disclosed that he would be meeting Sir Keir Starmer, the Labour leader, this week as he sought to build consensus with opposition leaders on the best way forward.

The Scientific Advisory Group for Emergencies (Sage) was due to meet on Tuesday and Thursday before giving ministers a wide-ranging assessment of how different decisions would affect the risk of a second wave of coronavirus.

Prof Whitty said there was no “perfect solution” to easing the lockdown without risking a rise in infections, saying it would come down to “difficult choices” by ministers about what to allow and what not to allow.

He said it was crucial to keep the reproduction number – the “R” rate – of the virus below one, meaning each infected person passes the virus on to fewer than one other person on average. The R value is currently between 0.6 and 0.7, according to experts from Imperial College London, and Prof Whitty said that would give the Government “some room for manoeuvre”.