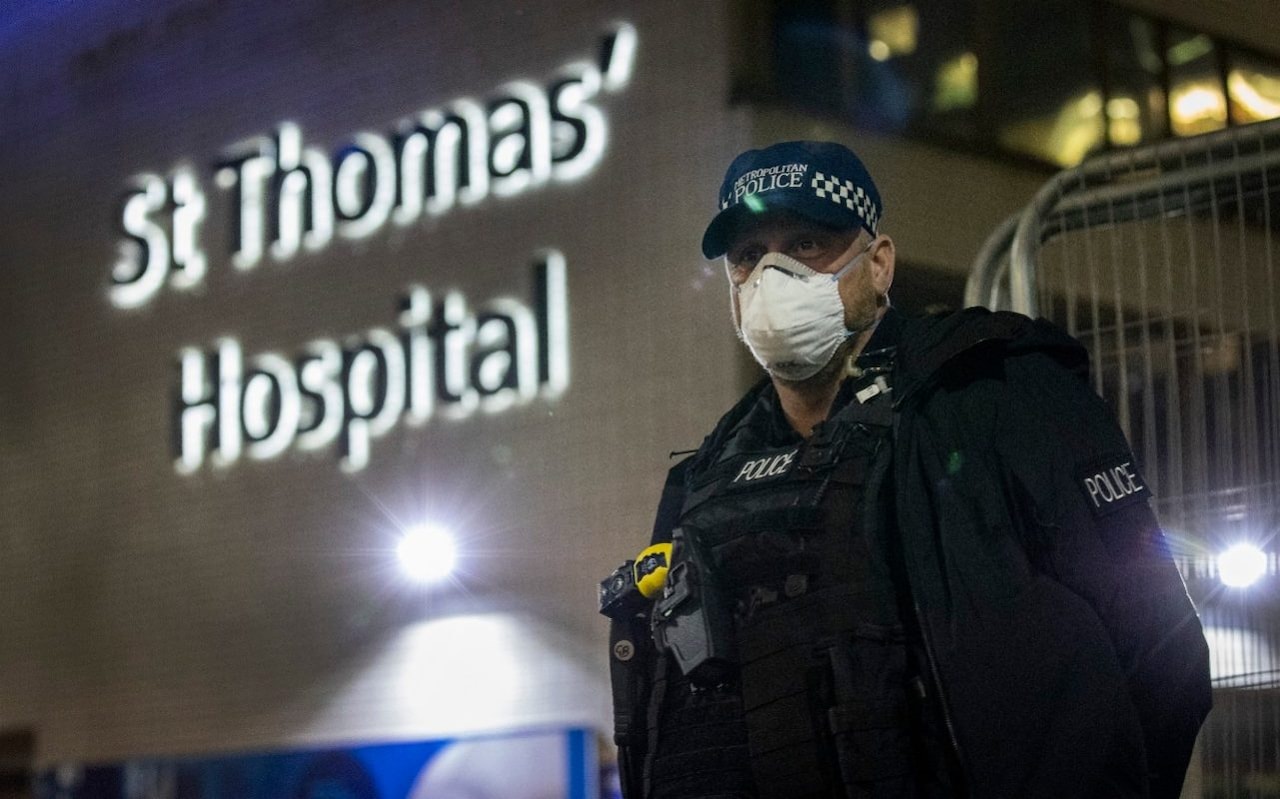 Boris Johnson’s battle against coronavirus is being overseen by the country’s leading lung doctor, the Daily Telegraph can disclose.

Dr Richard Leach has taken charge of a pioneering team of consultants monitoring the Prime Minister as he struggles to overcome the disease in the intensive care unit at Guy’s and St Thomas’ NHS trust, across the river from his Downing Street home.

After joining the hospital as a consultant physician in 1994, Dr Leach rose through the ranks and in 2018 was appointed clinical director for pulmonary and critical care medicine; the leader of the most effective respiratory team in Britain. He has also written five leading textbooks on how to keep critically ill patients alive, including “The Respiratory System at a Glance”.

Sources at the hospital confirmed that Dr Leach was leading Mr Johnson’s treatment and had been at the Prime Minister’s bedside.

“Richard is a brilliant doctor who knows everything there is to know about respiratory care. He’s saved thousands of lives,” a former colleague told The Telegraph on Tuesday night.

“There is a generation of junior doctors out there who learned their trade under Richard Leach. He’s the most knowledgeable respiratory specialist in the country, and he’s a straight talker. He would find the attention mortifying, but the Prime Minister couldn’t be in better hands.”

Police and security staff were guarding the entrance to St Thomas’ on Tuesday to protect the Prime Minister while he is at his most vulnerable.

So far, however, the news from inside the hospital has been reassuring. As of Tuesday evening, doctors had not yet seen fit to put Mr Johnson on a ventilator, and were instead keeping him supplied with oxygen using a regular mask.

Reportedly he was initially given only four litres of oxygen, when the usual threshold for intensive care admission is fifteen.

Like other coronavirus patients, however, the Prime Minister’s breathing reportedly remains laboured and his prospects of a full recovery remain uncertain.

When Mr Johnson was first admitted to St Thomas’s on Sunday, it is thought that he was initially treated on the nine-bedroom private Howard Ward on the top floor, which boasts “privacy and comfort, with stunning views of the River Thames, Houses of Parliament and Big Ben”.

On Monday evening, however, doctors resolved to move him into the general intensive care ward amid fears that his condition was worsening, and could suddenly deteriorate.

It was a decision borne of bitter experience. Dr Luigi Camporota, a specialist in respiratory care and lung biology, is one of the team of pioneering consultants attached to Mr Johnson’s ward, and regularly shares St Thomas’ findings with colleagues across the world.

In an online seminar delivered at the end of last week, Dr Camporota revealed that patients on the unit often face a tipping point after around a week, when after an initial upturn their condition can suddenly go into life-threatening decline.

He added there was evidence that corona was “biphasic”, meaning it lies dormant before creating new life-threatening symptoms.

“After an initial indolent course there is increasing severity, which can be very acute after five to seven days. The deterioration will be associated with hyper-inflammation so these patients – the lymphocyte count goes up, they are febrile and they need multiple organ support.

“One of the things we are trying to do is not to rush these people too much.”

Dr Camporota added that the majority of patients on the ward now occupied by Mr Johnson were “middle aged men” with underlying conditions including diabetes.

Patients have an average age of 57, while 69pc were male. Mr Johnson celebrated his 55th birthday in June last year. Survivors of the disease typically stay on ventilation for five days, while those who die eventually succumb after seven days on average, Dr Camporota said.

The fact that Mr Johnson has not – as of Tuesday night – been put on a ventilator may be a sign that doctors feel his condition is already improving.

Consultants at Guy’s have been vocal about the need to intubate at-risk patients swiftly, even if they insist they are feeling better.

“Some of these patients… there is a dissociation between the way they feel and the way they look,” Dr Camporota warned.

“Sometimes if we go with the way they feel, we might be tempted to delay intubation, whereas actually .. those patients need to be fast-tracked to a safe and early intubation so we can reduce the respiratory rate.”

Despite the Downing Street updates, the Prime Minister’s exact condition remained unclear, even to his own father.

Stanley Johnson, 79, who has himself gone into self-isolation following his son’s illness, said he was being forced to follow his son’s progress by watching the news.

“I am not being told how Boris is getting on. But he is optimistic, determined and resilient,’ Mr Johnson said.

“I hope that Boris will have time to recuperate at Chequers where I understand they have got a very good farm of 2,000 acres. He will be at home there, and in his element.

Meanwhile there was confusion over who exactly had been giving the Prime Minister medical advice before he was admitted to hospital.

At Monday’s Downing Street press conference, Chris Whitty, the chief medical officer, confirmed that he had advised Mr Johnson to get tested for the disease when he began showing symptoms, but added it had not been appropriate to counsel him any further.

The latest national figures for death rates make for worrying reading. According to data compiled by the Intensive Care National Audit and Research Centre (ICNARC) based on a sample of 2,249 coronavirus patients, more than half of patients admitted to ICUs do not survive. In Mr Johnson’s age bracket, the death rate falls to 46 per cent, although these figures do not take into consideration the 1,559 people still in intensive care.

Dr Jon Bennett, president of the British Thoracic Society, said the delivery of oxygen through a face mask is less serious than if he needed continuous positive airway pressure (CPAP) or mechanical ventilation, which requires heavy sedation.

Dr Bennett said: “For many people, having some oxygen helps to tide them over till the lungs sort themselves out.”

He said staff would need to keep a close eye on Mr Johnson.

“But I’m heartened that he’s on a normal oxygen delivery system, and let’s hope that it’s the peak of his illness,” he added.

If his condition worsens, it is thought unlikely that Mr Johnson will spend a lengthy period of time undergoing so-called CPAP treatment, which involves a hood and mask over the face that delivers a constant steady air pressure keeping the lungs inflated and helping people to breathe.

Last week the government announced it had ordered 10,000 of the machines developed by engineers at UCL and Formula One.

But consultants at St Thomas’ have raised fears that ventilators may actually worsen survival chances by causing damage to the heart and lungs. The graphic shows how invasive these machines are:

Dr Peter Sherren, another member of the team overseeing Mr Johnson’s care, wrote on social media last week that overuse of CPAP machines was a “recipe for disaster”.

“Many of my colleagues & I are very concerned about the growing momentum for CPAP use in COVID-19,” he added, in a tweet shared by the ICUs official page.

Experts have said that the Prime Minister is likely to have already undergone several tests to check his oxygen levels, white blood cell count, and liver and kidney function. He is also likely to undergo an electrocardiogram to check his heart, with blood and samples from his throat collected according to guidance issued to doctors by the World Health Organisation (WHO) last month.

If patients suffer severe oxygen deprivation, they can be placed on their fronts to improve ventilation and get more oxygen into the body. Research has shown that, in some severe cases of acute respiratory distress syndrome, laying patients prone for 16 to 20 hours a day can improve their chances of survival.

A doctor explains the theory behind proning – and why it can be effective-  in this video:

The last Prime Minister to be admitted to hospital while in office was Tony Blair in 2003. He was taken from Downing Street to London’s Hammersmith Hospital after complaining of feeling “a little under the weather”.

Mr Blair was an “acute admission” at the hospital where he was diagnosed with an irregular heartbeat. During a five-hour stay, the Prime Minister underwent a series of tests but was feeling well enough afterwards to be discharged and returned home to Downing Street.

“One of the features of Covid-19 in all countries seems to be that many more men become seriously ill than women – especially in the over 40 age group.

“Also we know that people under about 60 seem to have a higher chance of making a recovery from critical illness with Covid-19 than older people.

“But there is no doubt this turn of events means Boris Johnson is extremely sick.”