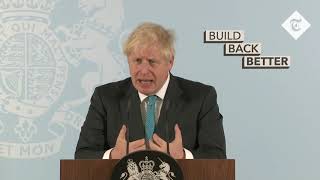 Sir Desmond Swayne, another former minister who has been a vocal critic of lockdown rules, said: “If the Government would let people make up their own minds about the risks they are taking, it would save the Prime Minister the trouble of having to remember all of these rules.

“I have never had so much correspondence as I have on this. I have had literally thousands of emails, and only three of them are from people who disagree with me.”

Another senior Tory MP said ministers would understand the rules if they had been forced to defend them first in the House of Commons, saying: “Better scrutiny leads to better decisions.”

Further pressure came from senior MPs on the parliamentary liaison committee, which is dedicated to questioning the Prime Minister. Tory MP Sir Bernard Jenkin, writing to Mr Johnson as committee chairman, said the “majority of us” support Parliament having a vote “before or immediately after” restrictions come into force.

He said: “The idea that such restrictions can be applied without express parliamentary approval, except in dire emergency, is not widely acceptable and indeed may be challenged in law.”

Asked about the ministers’ errors, Ken Marsh, the chairman of the Metropolitan Police Federation, said: “Today is not the first time. It’s just a constant mish-mash and different versions coming out from different individuals within the pillars of power, so to speak.

“For us to police what they are saying, it makes it all the more difficult. Clarity is the key, and transparency, so that everyone knows what they are doing.”

Mr Forbes told the BBC: “They are making it up as they go along” and said he had still not seen detail of the new regulations, which came into effect at midnight on Tuesday. He added: “This is just ridiculous – how on earth can we possibly be expected to understand what is expected of people in our region?”