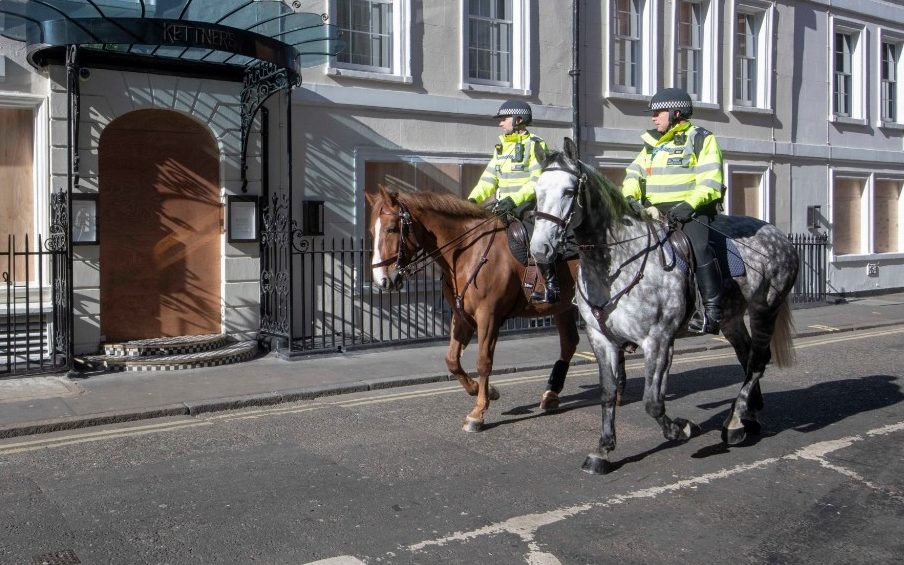 Boris Johnson has unveiled the biggest crackdown on the freedom of people living in Britain to go about their business since the end of the Second World War.

In a plan signed off at a meeting of the Government’s emergency Cobra committee the Prime Minister set out a series of measures which will radically curtail Britons’ freedom of movement in a bid to slow the spread of coronavirus.

People will only be allowed to leave home once a day for exercise, while others will face fines of £30 if they gather in groups of more than two outside.

All churches and places of worship will only open to bury corpses. while all shops deemed to be non-essential will close. The lockdown will be reviewed every three weeks but is likely to last for months.

All people in the UK should not leave their homes unless it is for one of four reasons in a drastic bid to force people to socially isolate and not infect eachother with coronavirus.

Firstly, Britons will only be allowed to go out to the shops to buy necessities such as food or medicines without which people’s health and welfare at home will worsen.

Secondly, anyone at home will only be allowed to head outside for exercise  once a day, either on their own or with a member of their household.

This could include taking a family pet for a walk or going for a jog with another member of the family. However they will not be allowed to do this with anyone from another household.

Thirdly, people will only be allowed to go outside if there is a medical need to do so or if they are providing care or support to vulnerable person and need to collect medicines for them.

Fourthly, people will only be able to travel to and from work if they cannot possibly work from home, such as employees on a list of key workers which was issued by the Government last week.

£30 fines for gatherings of more than two people

The penalties for breaching the lockdown are stark. All gatherings of more than two people outside the home will be banned unless they include members of the same household or family.

More than two workmen will also be allowed to congregate outside if it allows them to carry out and complete complex works.

Police who will get new powers to issue on the spot fines of £30 to any groups who gather outside in defiance of the lockdown.

Ministers are anticipating that these powers will aimed at dispersing groups of people, and are clear that if the fines are not seen to be enough of a deterrent they will increase.

Government sources made clear the fines will not initially be targeted at people who break the rules by leaving home, although this could change over time.

The Government will force through Parliament an amendment to the 1984 Public Health Act by the end of this week to ensure that police have the necessary powers to enforce the new lockdown.

Closure of all non-essential shops

A ban on clubs, pubs and cinemas imposed on Friday night by the Prime Minister will be extended to all non-essential retailers including clothing and electronics shops, hairdressers, bed and breakfast accommodation, as well as indoor and outdoor markets.

Any shops which open in defiance of a ban will be liable for prosecution by trading standards officers.

Throughout Monday restaurants and takeaways which would be allowed to remain open under the lockdown took matters in their own hands and closed.

Costa Coffee, sushi chain Itsu and sandwich bar Subway also planned to close their UK branches to protect the wellbeing of staff and customers during the coronavirus outbreak.

In Scotland Nicola Sturgeon, the Scottish First Minister, announced that building sites and hairdressers’ shops should close. She said: “If our National Health Service becomes overwhelmed people will die needlessly. This is about saving lives.”

All places of worship will have to close apart from when they are needed to organise funerals for the dead.

This means that churches, mosques, temples or synagogues will be banned from carrying out any baptisms, weddings or other ceremonies.

The closure order will also apply to all libraries as well as commercial outlets within parks such as cafes and kiosks to stop people gathering in large numbers and risk spreading coronavirus, Outdoor and gyms in recreation areas will be padlocked shut by councils but the parks themselves will be allowed to remain open. Gyms were ordered to be closed by councils last Friday.

Mr Johnson and his team are acutely aware that that scale of the restrictions that they are imposing on the UK will alarm many people.

The Government made clear on Monday that they will be reviewed every three weeks, although insiders said they were expected to apply in the UK for months.

Aides pointed out that the powers are comparable to restrictions imposed on people in Italy where over the past two days the increase in the number of deaths from the virus has slowed.

Mr Johnson and his team of ministers decided to act after seeing photographs and videos of families enjoying the sun over the weekend in parks and at tourist spots.

They felt that these images made clear Britons were not responding to the requests to stay indoors voluntarily and so had to act to ensure the NHS could cope with the developing virus. More images on social media of commuters squeezed into train carriages on the London Underground early on Monday morning merely added to these concerns.

However, some pointed out that the commuters had to come to work on trains with a reduced service if their employers were still asking them to do so and would only pay them if they did.

More than 75 per cent of Britons need to socially isolate for the attempt to stop coronavirus overwhelming the National Health Service. This meant that the only option left was to enforce the lockdown.

Earlier on Monday Matt Hancock, the Health secretary, said people who ignored government advice aimed at tackling the coronavirus pandemic were “very selfish” and asked why they were ignoring the official advice.

“It’s very selfish,” he told the BBC. “The NHS is doing everything it can and preparing for the spread of this virus. “If people go within two metres of others who they don’t live with then they’re helping to spread the virus – and the consequences of that costs lives and it means that, for everyone, this will go on for longer.”