Britain can aim for ‘significant return’ to normality in time for Christmas, says Boris Johnson 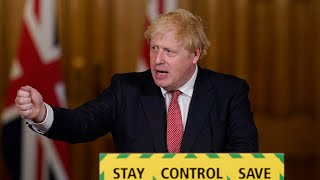 Mr Johnson announced that, from August 1, it will be up to employers to discuss with workers whether it is safe for them to return to the office.

He said: “We’ve all learned all sorts of lessons over the last few months about the wonders of Zoom, muting and unmuting our colleagues,” but urged employers to move away from having people work from home.

“We want to encourage people to think it is safe to come into work,” he added. But he stopped short of ordering people to go back to commuting, saying: “It is not for Government to decide how employers should run their companies and whether they want their workforces in the office or not – that is for companies.”

The shift in message on working from home follows concerns raised this week by Bank of England Governor, Andrew Bailey, who warned Tory MPs there would be “recession for a long time” if remaining lockdown measures were not quickly lifted and people continued to stay away from offices.

Josh Hardie, the deputy director general of the Confederation of British Industry, welcomed the change in work guidance but said “changing behaviour and confidence will take time”, while the Trades Union Congress accused Mr Johnson of “passing the buck on this big decision to employers”.

From next month, wedding receptions for up to 30 people can resume, while bowling lanes, skating rinks, casinos and beauticians can reopen provided they follow Covid-19 guidance.

The road map measures were presented in a call to Cabinet ministers on Friday morning, with Prof Whitty and Sir Patrick both on the call.

Mr Johnson said: “In the end, decisions are taken by the elected politicians”.

Asked whether the scientists had signed off easing restrictions, the Prime Minister’s spokesman said the decision was for ministers to take.