Britons ignore Government advice and start their own social distancing 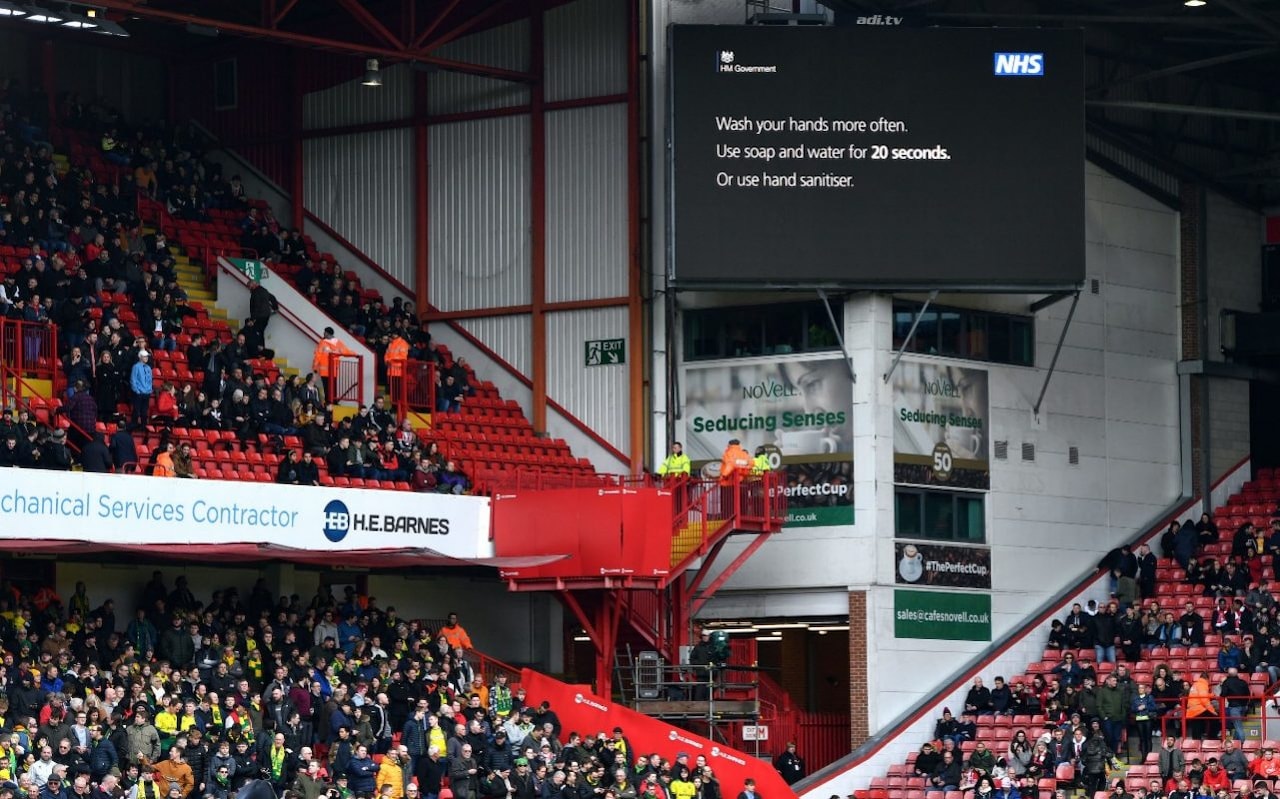 Top flight football was suspended on Friday as a string of events around Britain were cancelled in the face of the rapidly growing coronavirus crisis.

The Football Association, the Premier League, the English Football League, FA Women’s Super League and FA Women’s Championship agreed at an emergency meeting to call a halt to competitive action after the spread of the illness among several players and coaching staff forced their hand.

At the same time the London Marathon, due to snake its way through the capital’s streets next month, has now been postponed until October.

It comes as colleges began to cancel face to face teaching and numerous major events have been called off – despite the Government saying it is too early to implement mass ‘social distancing’ measures.

There are fears among some experts that unilaterally shutting down activity may undermine ministers’ strategy of introducing social distancing measures to coincide with the peak of the coronavirus epidemic.

Parents already appear to have started keeping their children away from school against official Government advice for classrooms to remain open.

Headteachers are being advised to treat coronavirus-related absences as authorised.

Geoff Barton, general secretary of the Association of School and College Leaders, said: “We have seen examples from our members where parents have said ‘my child is going to stay at home’.

“People will be worried about will they pick something up in school, will they bring it home and grandma gets it. There will be all kinds of things, some of which are completely legitimate concerns and some of which will be scientifically unproven.”

Mr Barton added that if parents decide they want their children to stay at home, schools should count this as an “authorised” absence.

“It’s the parents who have ultimate responsibility for the child so if they decide they are keeping their child at home, that’s what their decision would be, we would authorise it,” he said.

Gavin Williamson, the education secretary, said: “We’re going to take a very sensible and pragmatic approach in this route, and we’re not going to be penalising any schools on issues that are completely outside of their control.”

But he added that one of the safest places for children to be at the moment is in school.

The Prince of Wales and Duchess of Cornwall have postponed their spring tour due to fears over coronavirus while the Queen’s away day to Cheshire next week has also been abandoned as a “sensible precaution.”

The Prince, 71, and the Duchess, 72, were due to travel to Bosnia and Herzegovina, Cyprus and Jordan next week and had scheduled more than 50 engagements in just nine days.The trip was to be the first official royal visit to Cyprus for 27 years.

The couple, who remain in good health, are now looking at whether they can use the time to carry out some engagements in the UK, although aides stressed that these would not involve significant gatherings.

Buckingham Palace said various changes were being made to the 93-year-old monarch’s diary for the coming weeks “as a sensible precaution and for practical reasons in the current circumstances.” Her visit to Camden, north London, due for the end of the month has also been cancelled.

The Foreign Office (FCO) on Friday advised against all but essential travel to certain regions in Spain, including Madrid, after the Spanish authorities designated them as “areas of community transmission”.

Airlines were continuing to run flights as normal to and from these areas, said the FCO.

Sunday’s St Patrick’s Day parade through central London became one of the most high profile events to be hit, with Sadiq Khan saying he had “no choice” but to call it off.

The London Mayor said the parade had to be cancelled due to key performers and parade participants “no longer able to take part due to the ongoing threat of coronavirus”.

A number of universities have announced measures to reduce face to face contact between students and lecturers.

The LSE announced the most extensive curtailment of face to face contact, with all undergraduate and postgraduate courses to be “delivered online” by 23 March for the rest of the academic year.

King’s College London and the LSE also plan to stop in-person examinations, with the LSE saying that all undergraduate and taught postgraduate exams and assessments this summer would be taken online or graded using alternative methods.

Minouche Shafik, the LSE’s director, told students: “Given the exceptional circumstances, we believe the best decision is to move to online assessments now.

“We have had no indication from Public Health England that we should close, and buildings, services and facilities will run as usual.”

Durham University said all forms of campus teaching, including field trips and one-to-one tutorials, would be replaced with remote learning. Lancaster University, the University of East Anglia and Northumbria University are taking similar measures.

Claire O’Malley, Durham’s pro-vice-chancellor, told students in an email: “Please do not turn up to classrooms next week. We know that this may not be your preferred method of learning and that being in classrooms is an important part of your university experience. However, moving to online learning will help limit exposure to Covid-19 by reducing group activities.”

Couples could be forced to rethink their wedding plans this summer after the biggest wedding insurance providers suspended the sale of new policies while they assess the impact of the virus. John Lewis and Debenhams announced yesterday that it has withdrawn cover before the wedding season starts.

There were continued attempts yesterday to reassure people that mass gatherings do not yet need to be cancelled.

Saffron Cordery, director of policy and strategy at NHS Providers, told The Telegraph: “Waiting until we are closer to the peak of the epidemic to increase social distancing is about not fatiguing people at this stage. If it’s done too early then people may tire if they are asked to self-isolate over a longer period. “

Professor Keith Neal, emeritus professor in the epidemiology of infectious diseases at the University of Nottingham, said the Government’s strategy would help contain the spread of the virus.

He said: “The plans are sensible, it is very easy to say more needs to be done, but there is little evidence to make any decision.

Dr Michael Head, senior research fellow in global health at the University of Southampton, said cancelling sporting fixtures and stopping flights would be “of limited impact in reducing and delaying transmission”.

“People will make decisions to cancel events, but if a football match is played behind closed doors, people will gather to watch it in a pub. That’s a higher risk environment. With outdoor events, the risks are less. There are only limited benefits to cancellations,” he said.

Cancelled, postponed and suspended: Britain begins to shut down

All professional football in England or Wales suspended until April 3 at the earliest.

Wales’ Six Nations game against Scotland in Cardiff scheduled for today (Sat) has been postponed.

2020 Virgin Money London Marathon scheduled to take place through the streets of the capital on April 26 postponed till October 4.

England’s friendly games against Italy and Denmark at Wembley Stadium later this month called off, along with the England men’s under-21 matches against Andorra and Turkey at Stoke City and Burnley and the men’s under-20s game with Germany at Colchester United.

Queen’s day trip to Cheshire next week abandoned as a “sensible precaution”.

St Patrick’s Day Parade due to take place on Sunday through central London called off.

Words Weekend: The spoken-word and literary festival, due to take place at the Lowry in Salford from March 27–29, has been cancelled.

The Who have cancelled their UK tour, due to start on March 16 and run until April 8.

The release of Hollywood blockbusters Mulan, A Quiet Place II and Fast & Furious 9 in the UK have been postponed until later in the year.

Mayoral and local government elections postponed for a year.

Cambridge Science Festival has cancelled the rest of its scheduled programme, which had been due to run until March 22.

London Book Fair, which had been due to open on March 10, was called off after major publishers told staff not to attend.

Memorial service for the novelist VS Naipaul due to have been held at the National Portrait Gallery in London yesterday (March 13) cancelled. Jeremy Irons was to have been among the readers.

National Book Critics Circle Awards due to have taken place on March 11 and March 12, with authors readings and presentations, cancelled.

All meetings and events for members and clinicians at the Royal College of Psychiatrists cancelled, postponed or held online only until the end of May.

Week-long giant Scout and Guide jamboree near Chelmsford, Essex, expected to be attended by more than 10,000 youngsters in August has been cancelled.