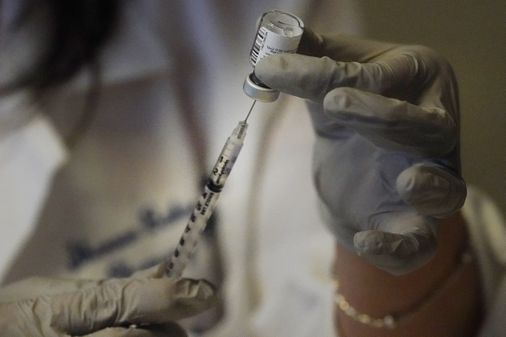 “We’re evaluating that,” Babineau said, responding to a question as to whether these employees could come back. “We’re pretty rigid in the way we have run our business for 30 or 40 years, and one of the things we’ve figured out, in addition to rebuilding the workforce, we need to rebuild the care delivery model.”

Get Rhode Island News e-mailsSign up to get breaking news and interesting stories from Rhode Island in your inbox each weekday.

The system has more than 2,700 job vacancies. Spokeswoman Kathleen Hart said the system has not yet changed its vaccination policy for employees.

Care New England, the second largest health system in the state, had reportedly said in October that 200 to 300 people declined to get vaccinated. But Care New England president and CEO Dr. James Fanale has said since then that his system ended up losing fewer than 100 employees because of the vaccine mandate, Raina Smith, a Care New England spokeswoman, said Friday. The company has not lifted its original vaccination requirements, Smith told the Globe Thursday. But Dr. Raymond Powrie, CNE’s executive chief of medicine, said the executives are also considering bringing back unvaccinated workers.

“We struggle with this,” Powrie said at the same summit. “I struggle with the idea of what that means for patients… We’re thinking it through. We haven’t made all final decisions.

“But in general I feel a strong need to stand by those workers who got the vaccines at a time of crisis and made sure they were there for us; and try to educate, work with and understand the perspectives of those who don’t,” said Powrie.

Smith said if Powrie said it’s being considered, “then it is. But I haven’t received word on any change yet.”

When the vaccine mandate for health care workers was announced by the governor and state health department in late summer 2021, it was clear that any unvaccinated employees wouldn’t even be allowed in the building when the Oct. 1 deadline came. Religious exemptions were not permitted, and workers filed a lawsuit. But a federal judge sided with the state.

Yet the closer the deadline became, the state began to soften the regulation. By the time the deadline passed, Governor Dan McKee’s administration said unvaccinated workers could stay on for an additional 30 days if their employer said they were “critical” for patient care.

The overwhelming majority of health care workers got vaccinated, and few lost their jobs despite outrage — and even protests — from those who refused the shot. The state went as far as saying in the original policy that anyone who did not follow the regulation was subjected to any other action under law “in addition to any action against the professional and/or facility license.” But from Nov. 1 to Thursday, 36 health care workers have had action taken on their licenses to practice, but not one lists that it was due to being unvaccinated.

Joseph Wendelken, a spokesman for the state health department, told the Globe the current state regulation is that health care workers need to be up-to-date on their COVID-19 vaccine, which currently means a primary series and a booster or they must wear medical-grade masks when Rhode Island is seeing “elevated levels” of transmission (50 cases or more per 100,000 people per week).

Separately, a federal policy requires workers in facilities that receive Centers for Medicare & Medicaid Services (CMS) reimbursement to get at least a primary series of COVID-19, he said. For those in facilities that do not receive CMS reimbursement, he confirmed, they can still report to work if they have not received their primary series at all but wear an N95 mask.

Brad Dufault, a spokeswoman for the United Nurses and Allied Professionals union, which represents more than 7,000 health care workers in the state, said they still support vaccine mandates for workers.

“The pandemic is not over, as we’ve seen with the new Omicron variant, and we still have COVID patients in our hospitals,” Dufault said in a statement Thursday night. “We must continue to ensure our hospitals are safe for patients and healthcare workers, and we urge all Rhode Islanders to get vaccinated and boosted in an effort to prevent another surge in cases, hospitalizations, and deaths.”

Other hospitals said they would have brought unvaccinated employees back if it wasn’t for the state’s regulation.

Fiona Phelan, a spokeswoman for Westerly Hospital, which is owned by Yale New Haven Health in Connecticut, said employees in the system, outside of Rhode Island, can either receive vaccination, as well as a booster, or receive a medical or religious exemption.

“We do not have currently have any employees with religious exemptions as Rhode Island does not allow them,” she said.

Officials from Landmark Medical Center and CharterCARE Hospitals could not be immediately reached.

This story has been updated with additional information from Care New England.