Can you catch Coronavirus from your gym? 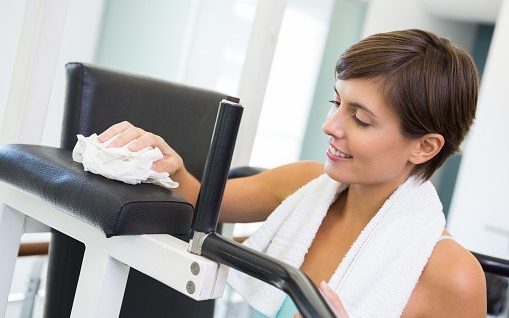 Of all the coronavirus-induced limitations – on flights and sporting events, schools and film festivals – there’s one thing fewer people are sorry to be missing out on: exercise. Gyms have begun mass mailouts to members in earnest: ‘Keep calm and wash your hands with soap and water,’ read one; ‘IMPORTANT CORONAVIRUS INFORMATION’ blared the email subject line of another, which explained that the studio is ‘open as usual’, but that extra precautions are being taken during the outbreak.

From boutique studios to chains, the frequency of cleans is being upped – ‘especially high use areas such as pin pads, door handles, lockers, equipment’, according to an update from PureGym, which has 230 UK outposts.

‘Ensuring soap dispensers remain filled’ – ditto hand sanitiser – and ‘continuing to remind members of the importance of good hygiene’ form the rest of their pre-pandemic manifesto; at Barry’s Bootcamp, a fitness studio, attendees have been told to ‘avoid kissing, hugging, and the sharing of cups and water bottles.’

A global disease outbreak is as good an excuse as you’ll get for missing a workout, but fitness studios are no more likely to be breeding grounds than any shared space, says Edward Wright, senior lecturer in microbiology at the University of Sussex. “As long as people using wash their hands before and after their exercise, refrain from touching their face in between and avoid close contact, any risk of undertaking these activities will be mitigated,” he explains.

Covid-19 is spread via infected droplets in the respiratory tract – the main routes of which are through the nose and mouth – and can remain contagious on surfaces for up to 72 hours. But while gyms may feel like treadmill-speckled petri dishes, sweating in a shared space doesn’t raise one’s likelihood of contracting the disease to any significant degree, Wright adds.

The best methods for prevention remain the same across the board: self-quarantining if you’ve recently returned from a high-risk country or feel unwell, regular handwashing with soap and water for 20 seconds, and catching all sneezes in tissues (or your elbow, if you don’t have any), which can be disposed of.

The disease can’t be transmitted through skin, so touching potentially infected yoga mats, boxing gloves, bike handles or wiping sweat from your brow – provided you don’t go on to touch the insides of your nose or mouth and wash your hands thoroughly afterwards – should not place you at any greater risk of catching it.  And while there may be more panting or barbell-induced groaning during workouts, these do not equate to the capacity for travel of droplets released via coughs or sneezes. That hasn’t stopped members taking measures of their own, however.

Lee Chambers, 34, has begun wearing single-use medical gloves for use of “cardio machines, weight machines and free weights.” Her weakened immune system – coupled with the fact that “gym equipment is not at the height of sterility” – has made her loath to take added risk. A notice issued by her studio was “insightful,” she adds, but not worth the perceived ramifications. Suzanne Noble is “not avoiding” workouts but has begun “thinking about” exercise hygiene in her London gym a new light. “I was definitely aware of the lack of wipes, the guy that coughed next to me on the treadmill and thinking about all the germs that must have settled on the machines from sweaty hands,” she describes of her morning session.

One south London boxing club-goer reports that, after the instructor coughed during a class, two attendees “walked out” and “had a go at him about it”; attendees this week had more than halved from 25 to 10. Some expressed worries about catching the virus from boxing gloves.

In the UK cases of Covid-19 are rising fast; offices are increasingly being closed to halt the spread of the infection, which Whitehall officials have reportedly estimated will kill 100,000. Exposure to densely populated areas ups the risk factor – those using public transport during flu outbreaks were found to be up to six times as likely to pick up an acute respiratory infection, while those with longer journeys or ones involving busy interchange stations saw higher rates of infection due to the higher number of people in close proximity and shared surfaces.

While the gym does share some of these traits – a large number of people within two metres of each other (the range of the spread), and communal equipment – frequent handwashing and avoiding face-touching should provide protection enough. Plus, swimming pools may prove particularly useful: low chlorine levels act as a “general antiviral,” Wright adds, “so the virus would be deactivated by the chemical.” This is not so in saunas, however, which are not hot enough to effectively kill the infection off. If droplets are infected, their potency is “deactivated through exposure to the environment or cleaning,” Wright says.

Jamie Harkin, an 18-year-old gym-goer in Tyrone, Northern Ireland, hopes that latter method is employed with gusto: “This current epidemic is scary,” he says, and with cases here growing, “public spaces such as gyms and leisure complexes should be compelled to invest time and resources into deep cleaning, compulsory hand sanitisation stations at the entrance and exit points as well as antibacterial wipes beside equipment.”

Gyms are yet to release outbreak attendance figures which, due to rising numbers self-quarantining, are likely dwindling. And as we roll into spring, coronavirus is also expected to affect fitness holidays – overseas bootcamps in which attendees swap beach lounging for burpees. Such trips have grown exponentially in recent years: wellness tourism is now worth £491bn globally, and rising at double the rate of regular holidays, according to a report from the Association of British Travel Agents, while 2m people said they plan to take a healthy holiday in the next 12 months.

The Body Camp runs fitness retreats in Ibiza, Mallorca and Bali and, while they are yet to see any significant drop-off on their trips, those on offer in Italy – of which there are 80 listed on the Handpicked website – have now fallen victim to the country’s coronavirus lockdown. With many flights elsewhere being cancelled, it is an industry likely to be hit hard during the outbreak.If Covid-19 puts the kaibosh on travel plans this year, all we can do – beyond handwashing and avoiding touching your nose and mouth – is to keep our immune systems as healthy as possible: eating high-fibre foods to boost gut flora, for example, and exercising to keep white blood cells (which attack bacteria and viruses) mobile being our best means of defence. Good news, for those worried Covid-19 will impinge on their fitness regime; less so, perhaps, for people hoping to skip Leg Day.