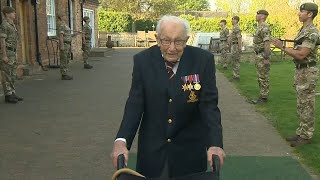 He said: “I am still amazed by the amount of kindness and generosity from the UK public who continue to give despite it being an uncertain time for many. I think the amount raised demonstrates just how much we all value the dedication and sacrifices made by our NHS workers. I have fought during a war and they are now fighting in a war too.

“I’m honoured to be opening the NHS Nightingale Yorkshire and Humber and to get to thank many of the NHS workers directly. I know that having extra beds available for the sick, if needed will be reassuring to those workers, as it would have been to me when I was on the frontline.”

Last week he was dubbed a “one man fundraising machine” by Prince William, and on Saturday the Duke of Sussex added to the praise.

Prince Harry said: “I think what he’s done is utterly amazing, but it’s not just what he’s done it’s the reaction that people have had as well, I think is just wonderfully British.”

Mr Moore, who was raising money for NHS Charities Together, completed his 100th lap last week and was honoured by the Ministry of Defence with an armed guard.

He has captured the imagination of the nation, and now a team of aircraft restorers wish to give him a Spitfire flypast on the day of his birthday, on April 30.

Mr Moore initially intended to raise £1,000 for the NHS charity, but smashed the target within days.

He has said he will keep walking as long as people keep giving.