could this soup speed up the Prime Minister’s recovery from coronavirus? 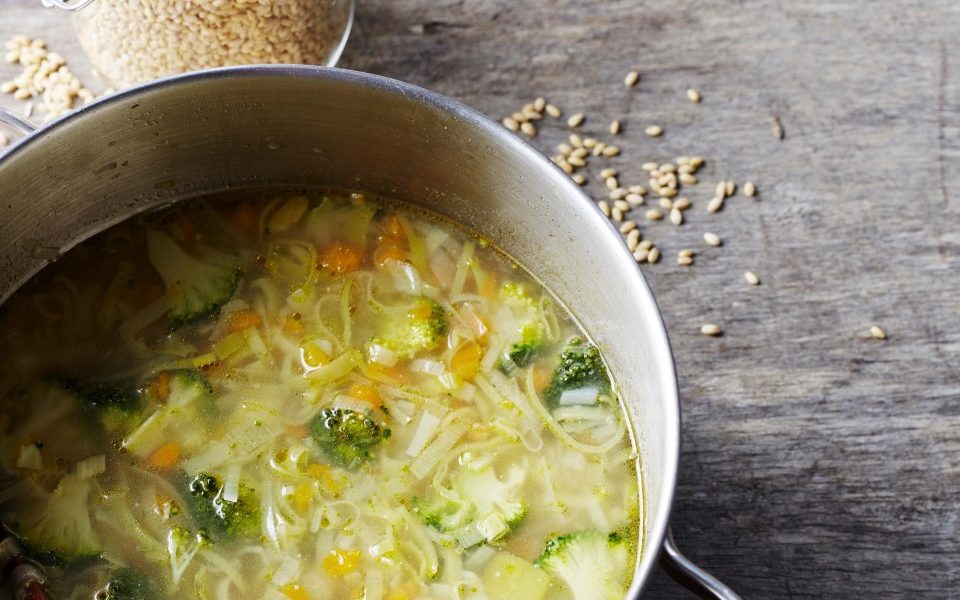 As Prime Minister Boris Johnson recuperates at Chequers, like many who have escaped with their lives from Covid-19, he’ll be paying particular attention to his diet. And a Northamptonshire-based businessman and his caterer sister might have just the recuperative tonic he needs.

Three weeks ago, John Brownhill was running an HR consultancy and his sister, Many Guest, a food business in Yorkshire. But today, their Food4heroes initiative is harnessing the talent of chefs across the country to provide free food for NHS staff.

And inspired by the PM’s recovery and his need for healthy food, they have added a new dish to the Food4Heroes menu: it’s a nourishing soup, with a stock made from chicken bones, and a mix of vegetables and pearl barley. And its name? Boris Broth.

“Just like Boris, it’s invigorating, it’s robust and it’ll put colour in your cheeks,” says Mandy, adding: “It’s a sustaining tonic for those in good health and a restorative for those recovering from illness.” Mandy and John will serve their Boris Broth to key NHS workers across the country, and they hope people will cook up this simple dish at home.

The Food4Heroes initiative was sparked when John, like millions of others, was moved by a video recorded by York nurse Dawn Bilbrough. Sitting in her car at the end of a long shift she lamented her plight at finding the shelves of her local supermarket empty.

“I called my sister Mandy,” John says, “who had been running a catering business in Yorkshire and suggested we do something to help.”

Now, with family, friends and a growing team, Brownhill has a website that is galvanising chefs and caterers in every region of Britain to cook and supply food for key NHS workers. A simple menu of soups and pies is delivered cold to hospitals that have signed up, and the staff then heat them as necessary in their own time.

“It’s simple, nutritious food, and we hope Boris Broth will bring us all a smile and a dose of optimism,” says Mandy, who adds: “It’s like Woolton pie for 2020.”

Some of you won’t have heard of Woolton pie, others will remember it well. It is a dish of unique simplicity and it was unveiled at a lunch at the Savoy hotel in March 1941.

Two years into the Second World War, the Ministry of Food was working on a variety of ways to encourage home cooks to make the best of the meagre ration. One of its innovations was to task the chef of the Savoy to make a pie that made a virtue of vegetables. And so the short-legged – and even shorter-tempered – Francis Latry donned his tall white hat and, at the lunch, revealed a dish that combined potatoes, cauliflower, swedes, carrots, a little vegetable extract (not compulsory) and a spoonful of oatmeal.

In a pie dish, it had a crust of wholemeal pastry (a recipe published the following month suggested potato as an alternative), a sprinkle of chopped parsley and, baked until brown, the guests at the Savoy that day had it served with brown gravy.

The grand lunch at which it was dished up was attended by the new American ambassador, John Winant. Winston Churchill was in attendance, as was the man who leant his name to the pie, Lord Woolton, the minister of food.

Woolton wrote in his diary that night that the pie was “extremely good”. But then he was a man with simple tastes. He both deplored the idea of rich food, and his delicate constitution meant he physically couldn’t handle it. It was one of many extraordinary reasons that made Lord Woolton the perfect man for the moment.

When he recommended a simple diet, he genuinely meant it. And the country, he insisted, could easily live with the ration. There was no reason to flout it, no reason to hoard.

Woolton would have had little patience for those stockpiling goods from supermarkets today, clearing shelves before the elderly get a chance to shop. Speaking to the Manchester Evening News in April 1940, the day after his appointment as minister, he declared that: “It is selfish to hoard. I appeal to housewives not to hoard anything that is in daily use. I have no doubt about the way to treat hoarders.’

And if people are concerned at all about food supplies in this modern-day crisis – and there is no suggestion currently that supplies are in any way threatened – Woolton would have been flabbergasted.

The range and quality of ingredients and food products available today does not even bear comparison. But our widened palates would make the task of implementing the ration rather harder.

Woolton’s policy was to restrict food gradually so that people could get slowly used to it and then to ensure that he could honour the meagre ration that was offered. In January 1940, butter and bacon were restricted to 4oz per week with sugar capped at 12oz. Meat was rationed by price in March, tea in July, and then eggs; the following March 1941, there were restrictions on jam, marmalade, syrup and treacle.

Other items – including rice, condensed milk, tinned peas, oats and chocolate – were added in 1942, and sausage were rationed in 1943. Ration books had been distributed in January 1940 and they had to be kept safely; they were your passport to food.

Perhaps we can compare the restrictions on movement we face today with that of the war. The only freedom one had then when it came to shopping was to register for different items in different stores. If you missed the chance to buy meat in a designated week, that meant no meat.

Shopkeepers would keep the coupons for various items that were also issued and send them to the local food office. They in turn would issue a permit enabling the shop to buy stock from regulated wholesalers. The wholesalers were regulated by the ministry of food. The entire department was based, in complete secrecy, in the Welsh coastal town of Colwyn Bay – where small hotels, hostels and schools were requisitioned for offices. And at the top of the pile was Woolton.

Fred Woolton was a working-class man who had made himself a millionaire working in the decades before the war as a retailer. He understood logistics, purchasing and marketing. He was also a canny operator who sanctioned black-market deals in places like Cairo to buy rice, and who negotiated direct with traders, for sugar for example, with businessmen from towns such as Alexandria. And he battled cabinet colleagues and Churchill for the budget he needed to fulfil his ration.

Many housewives did their weekly shop on a Friday and there were weeks when, with Atlantic merchant ships being torpedoed in treacherous, long and terrifying crossings, Woolton nearly didn’t fulfil his side of the bargain. He disdained the black market, but turned a blind eye to the ‘grey’ market; he was unworried about petty offending, boys selling scrumped apples, young women getting an extra bacon rasher because the butcher’s apprentice had taken a fancy.

But that Britain did adhere to the ration, that the nation got its eggs, that there was no anarchy, is remarkable. More remarkable is the healthy state in which Britain emerged from the Second World War. Child mortality had never been so low, children grew taller and sturdier, tooth decay diminished. There are no records of obesity.

Woolton saw the war as the perfect opportunity to target children with healthy meals. “To preserve the health of the future nation, I wanted to secure that every child, in every school, got at least one good hot meal a day,” he reflected in his diary.

Yet he failed to reign in one man who disdained the ration. Taking one look at his portion of Woolton pie at that lunch in 1941, Churchill grabbed a waiter. “What is this?” he asked. “Woolton pie, sir,” replied the waiter. The wartime PM huffed characteristically before barking: “Bring me some beef!”

But today, with more of us working from home than ever, we can take inspiration from Woolton’s ethic. He called on the home cook “to mobilise themselves on the Kitchen Front”.

We have better and more ingredients than he could have dreamt of. So, armed with a bowl of Boris Broth, we, the NHS staff and, indeed, the Prime Minister, can fight this enemy of the 21st century.

For more, go to food4heroes.co.uk. William Sitwell is author of Eggs or Anarchy: The Remarkable Story of the Man Tasked With the impossible – to feed a nation at War (Simon & Schuster, £9.99), available now from books.telegraph.co.uk, or by calling 0844 871 1514

Melt the butter and oil in a pan and add the vegetables and pearl barley. Cook for 2 minutes until softened.

Add the chicken stock and simmer until the vegetables are tender and the pearl barley is cooked through.

Add the cooked chicken and cook until heated through.

Adjust the seasoning stir in the parsley and serve.

To make Boris Broth suitable for vegetarians, replace the chicken stock with vegetable stock and instead of chicken add chopped celery leaves and a small pinch of thyme.

Cook all together for 10 minutes with just enough water to cover. Stir occasionally to prevent the mixture from sticking. Allow to cool; put into a pie dish, sprinkle with chopped parsley, and cover with a crust of potato or wheatmeal pastry.

Bake in a moderate oven until the pastry is nicely brown, and serve hot with brown gravy.