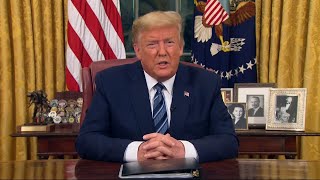 The ban imposed by the US on travel from Europe will not work to contain coronavirus, scientists have warned.

On Wednesday, Donald Trump, the US President, announced that all travel from Europe to America will be suspended for 30 days, with the United Kingdom exempt.

But in the past fortnight, research by Northeastern University, in Boston, found that imposing restrictions in China had delayed the overall epidemic progression by only around three to five days.

This week, modelling by the University of Southampton showed that other measures such as early detection and contact reduction had far more impact on halting the spread of the virus.

Experts in Britain said the travel ban showed that political leaders in the US – where nearly 1,000 people have been infected and 38 have died – were out of step with their own scientists.

Prof Paul Hunter, professor in medicine at the University of East Anglia, said: “It is uncertain what the US intends to achieve with the recently announced travel ban to the Schengen area of Europe.

“Introducing an international travel ban at a time when the US is now one of the countries with the most rapidly accelerating internal transmission rates will do little if anything to reduce the burden of infection within the US.”

Travel restrictions in mainland China began on January 23. The Northeastern study estimated that the measures cut cases in the country by just 10 per cent by January 31, largely because the disease was already seeded elsewhere by the time they were enacted.

By early February, 59 airlines had suspended or limited flights to mainland China and several countries, including the UK, US, Russia, Australia and Italy, had imposed travel restrictions.

But although researchers did find that the steps initially reduced the export of cases from China by around 77 per cent, it picked up again in subsequent weeks. Many infected people were able to leave the country before restrictions were imposed.

The authors concluded: “We expect that travel restrictions to Covid-19 affected areas will have modest effects and that transmission-reduction interventions will provide the greatest benefit to mitigate the epidemic.”

The Southampton study also found that the lifting of inter-city travel restrictions since February 17, which aimed to minimise economic impact, had not led to an increase and suggested social distancing was a more effective method of slowing the spread.

“Compared to travel restrictions, improved detection and isolation of cases as well as the social distancing likely had a greater impact on the containment of the outbreak,” the researchers said.

Dr Michael Head, senior research fellow in global health at the University of Southampton, said: “Over recent weeks, statements from the US political leadership appear, from a distance, to have been inconsistent and occasionally at odds with their own public health recommendations.

“These differences will not be helpful in supporting their national and state-level response to COVID-19.  Any new intervention, such as a lockdown or travel ban, should be guided by the best possible evidence, and currently, the reasoning behind this new restriction is unclear.”