Experts say we are 14 days behind Italy, as rules for UK bed rationing are released 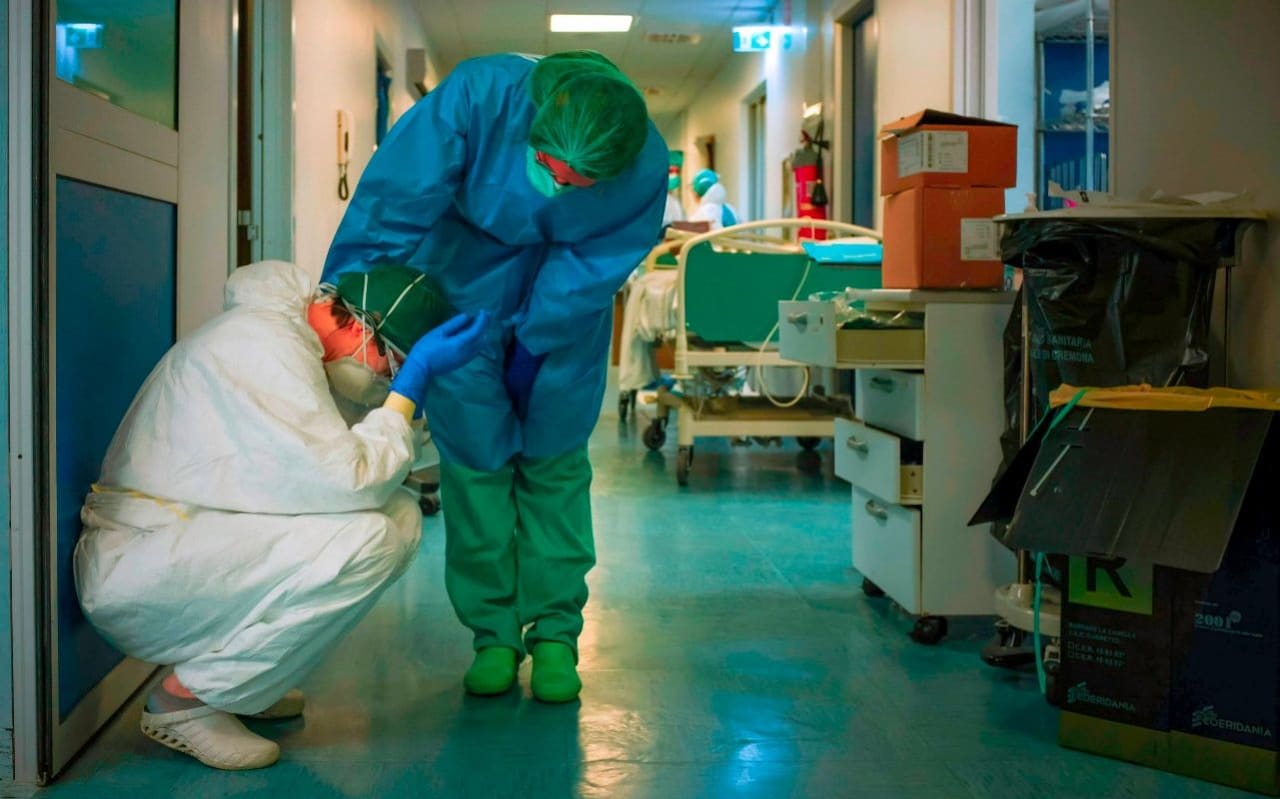 The official guidance to intensive care doctors detailing the process for deciding who should receive critical care if rationing is required makes for sobering reading.

Agreed with NHS England and the relevant specialist medical societies, it was published on the website of the National Institute for Health and Care Excellence (NICE) in the early hours of Sunday morning.

It came at the end of a bright spring day in which thousands crowded city parks, farmers markets and seaside promenades despite government pleas for social distancing.

Perhaps we Brits do not grasp the fearful logic of the coronavirus’s exponential growth? Or perhaps we’re just not up for quarantine? Either way this weekend may be looked back on as a reckless nation’s last roll of the dice before the storm hit.

For make no mistake, the mathematical modelling shows we are in lockstep with Italy’s terrible trajectory, lagging just two weeks behind. Inigo Martincorena, group leader at the Sanger Institute in Cambridge, posted an analysis at the weekend which shows Britain’s numbers almost exactly mirror Italy’s in terms of Covid-19 cases and deaths.

He warned that unless Britain was completely locked down by Monday, we would suffer the same fate or worse. “You can see how the UK epidemic is closely following Italy’s, with a 14-15 day lag and the same doubling rate. We need a national lockdown by Monday just to be as badly hit as Italy. Time is running out.”

The Prime Minister and other UK politicians have been presented with the same data and on Sunday appealed again for people to stay at home.

“My message to all your viewers is simple, life has changed, we’ve got to do things differently for a while now”, London mayor Sadiq Khan told the BBC. “Social interaction leads to the disease spreading, leads to people dying. Don’t leave your home unless you really really have to.”

He added: “Don’t just do it for yourself, do it to stop the disease spreading, do it for your vulnerable loved ones who will die if you don’t, do it for the heroic NHS who need our help.”

If the NICE guidance on the allocation of critical care beds (beds with ventilators) does not alter our behaviour it’s hard to know what might. It makes coldly stark the life and death choices doctors are likely to face over the coming weeks and months.

Intensive care clinicians have been calling for the guidance with increasing urgency as intensive care units in the London suburbs have started to fill with Covid-19 patients. The guidance provides an “algorithm” to help them decide who should be admitted to these life-saving but scarce facilities and who should not.

In Italy there has been controversy as doctors have been forced to discriminate between patients based largely on age. And this, in a country which has twice the number of critical care beds we have in Britain – 14 per 100,000 people, compared to the UK’s seven.

The NICE guidance does not categorise UK Covid-19 patients by age but instead asks doctors to rank patients on a nine point “clinical frailty scale”. At one end of the scale, with a score of one, are the “very fit” – people who are “robust, active, energetic and motivated” and who “exercise regularly”. At the other end, with a score of nine, are the “terminally ill”. The scale is reproduced below. How do you score?

An accompanying algorithm for use by doctors divides patients at a score of five, the “mildly frail”. Those with a score of less than five are considered fit enough to benefit from critical care, subject to consideration of any underlying conditions and the severity of their illness. Those scoring over five are put through a process where doctors must decide if critical care is “appropriate” before proceeding.

For patients with confirmed COVID-19, decisions about admission to critical care should be made on the basis of “medical benefit, taking into account the likelihood that the person will recover to an outcome that is acceptable to them and within a period of time consistent with the diagnosis,” says NICE.

The guidance also provides doctors with mortality data for patients suffering from pneumonia, the main form of severe illness caused by Covid-19. This data is banded by age, as are similar mortality tables for patients with underlying heart and lung conditions. These additional data will help inform doctors judgments beyond the patient’s basic frailty score.

It is not just in Italy where critical care units are being overwhelmed. In Spain and parts of France intensive care wards have also reached capacity, with doctors having to refuse care to those who in normal times might have received it.

A friend in Barcelona told me last night he worried Britain would only lockdown fully once footage of UK hospitals in crisis hit the television news. He said the rules in Spain were initially taken lightly but the “sheer speed” at which deaths mounted changed that.

“Over here it is deadly serious now. No one is mucking about. If you go out it must be quick and for something important. There’s a palpable atmosphere of fear,” he said.

On Thursday night, a major London hospital declared a “critical incident” due to a surge in patients with coronavirus.

“I am writing to let you know that we have this evening declared a ‘critical incident’ in relation to our critical care capacity”, said Northwick Park Hospital in Harrow in a message to staff. “This is due to an increasing number of patients with Covid-19. This means that we currently do not have enough space for patients requiring critical care”.

The hospital has since found additional capacity. Nevertheless, a relentless pressure is building as we enter the steep upward curve of the epidemic, with cases in the UK doubling roughly every few days.

A senior director at another London acute trust told the Health Service Journal: “Given we’re in the low foothills of this virus, this is f***ing petrifying”.

He added: “The trusts in outer London seem to be hit much worse at the moment, probably about two weeks ahead of the rest of the country. Barnet, Lewisham and Greenwich, Epsom and St Helier, North Middlesex and Hillingdon are all struggling.

“I was in denial about the seriousness of this virus a couple of weeks ago, but not anymore… things are going completely nuts”.

Britain has a similar population size to Italy and although Italy has a higher proportion of people over 65, the difference is not huge, 18.1 per cent versus 21.5. One thing in our favour may be that our elderly tend to be more isolated.

However, the incidence of adult obesity in Britain (a good marker for underlying conditions including heart disease and diabetes) is much higher, 27.8 per cent compared to 19.9 in Italy.

Official figures on Sunday brought the total tally of Covid-19 deaths in Britain to 281. In Italy, deaths stand at 5,476. This may feel much further ahead than a mere 14 days but only if you ignore the terrible maths of exponential growth.

To picture that better, experts recommend we try the “wheat and chessboard” test. Imagine putting one grain of wheat on the first square of a chessboard, two on the second, four of the third and then continue doubling until all 64 squares of the board are covered. Now, ask yourself, how many grains of wheat are there?