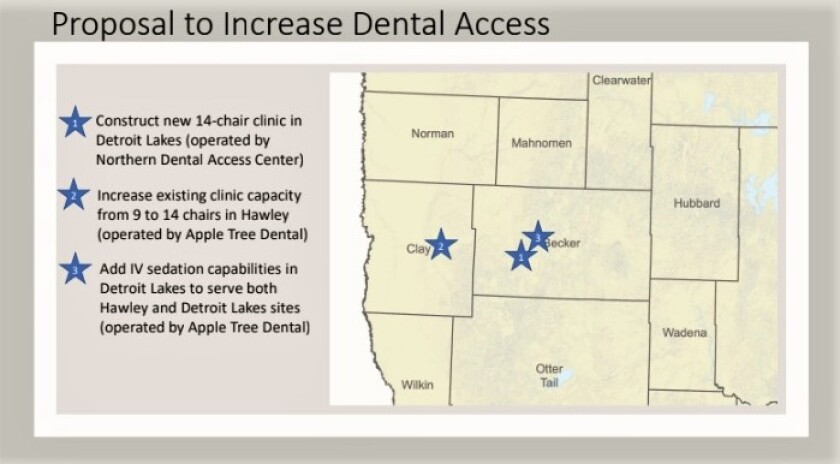 DETROIT LAKES — Land is being sought to build a dental clinic to serve low-income families, seniors and individuals in Detroit Lakes.

Each location provides a minimum two-acre lot for the planned 11,000-square-foot clinic that will offer 14 patient chairs.

“We are planning for doors to open in early 2024,” Neubauer said. “That leaves a little time to plan and do serious fundraising.”

The fundraising goal totals $7.5 million and would pay for the new building in Detroit Lakes, providing necessary equipment for high-level sedation and increasing the existing clinic capacity at the Hawley location from nine to 14 chairs.

The vision for the dental clinic was made public in late 2021. Since then, a feasibility study was completed, which pinpoints where another non-profit clinic would be centrally located to alleviate the overflow from other clinics.

According to documents provided by Detroit Lakes dentist Heather Kivi, an additional 11,500 low–income residents will be able to receive dental care when the Detroit Lakes facility is up and running. She added the plan is to provide professional dental staff at the office through grant money.

When Kivi moved back to the area in 2008, the Ponsford native joined the team at Dental Associates in Detroit Lakes. Among others clients, the clinic serves those with state insurance coverage. She quickly saw the office couldn’t keep up with the demand.

“In February of 2020 I started having conversations again with a group of local dentists,” she said.

Those conversations provided insight on how to bring a low-income dental clinic to Detroit Lakes, from community support to funding.

The 1999 Park Rapids Area High School graduate quickly found a team of people who joined the effort. She said they are all looking forward to serving the underprivileged in the community.

“My hope is, at some point and time, we can include more than dentistry and serve the whole patient,” Kivi said.