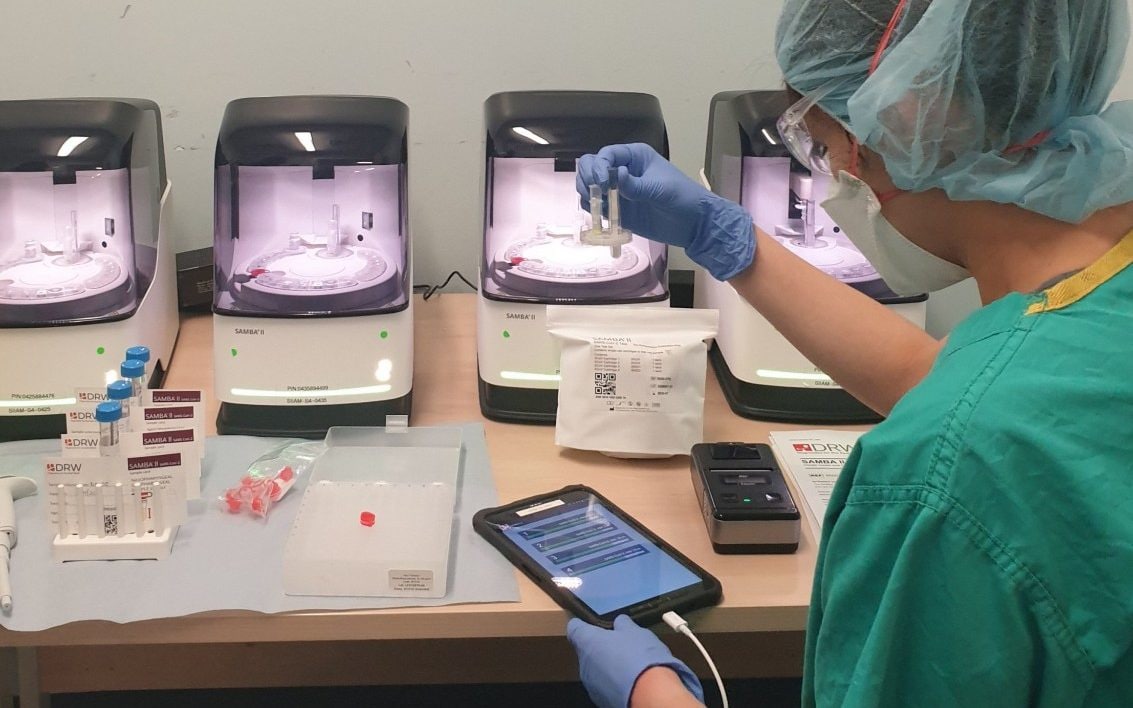 The Government has still not bought any Covid-19 immunity home testing kits, more than a week after Matt Hancock claimed 3.5 million had already been purchased.

The accuracy of the kits – described as “game changers” by Boris Johnson – is still being validated by a panel of experts appointed by ministers. Public Health England (PHE), which had previously said the antibody tests would be available for home delivery by firms such as Amazon in days, said on Thursday it was not involved in procuring the kits.

The confusion over the antibody testing kits will add to growing concern that the Government is losing any grip it had on the coronavirus pandemic.

One senior minister said on Thursday that Downing Street’s handling of the crisis was “embarrassing” and questioned why testing – both for antibodies that showed if someone had caught the virus and to check if someone had it currently – had not been ramped up.

At the televised Downing Street press conference on March 24, nine days ago, Mr Hancock, the Health Secretary, was insistent that the antibody tests had already been purchased. He said: “Of course it really matters for getting people back to work, so we have now bought 3.5 million antibody tests.

“That will allow people to see whether they have had the virus and are immune to it and then can get back to work.”

The next day, Professor Sharon Peacock, the director of the national infection service at PHE, told MPs on the science and technology committee: “Several million tests have been purchased for use,” adding: “Once they have been tested this week and the bulk of tests arrive, they will be distributed into the community.”

Amazon, it was disclosed, had been signed up to deliver the tests, which involve taking a pinprick of blood from a thumb with results produced rapidly. Government sources subsequently briefed that the target was to purchase 17.5 million tests, covering almost a third of the population.

But on Thursday, the Department of Health and Social Care (DHSC) conceded that the Government had not actually bought the tests but had put agreements in place to allow them to buy 3.5 million kits from a number of manufacturers, provided they receive official approval.

“What we have done is agreed to buy testing kits in subject to testing,” said a DHSC spokesman, adding: “We have not yet bought any tests but we do have contracts agreed subject to testing. We have secured small numbers with potential to get much larger orders.”

At Thursday evening’s Downing Street press conference, Mr Hancock made no mention of a timetable for rolling out the antibody test but insisted tests would have to be proved to be accurate before receiving approval. He said that several tests being checked had failed, and in one case a test missed three out of four cases of coronavirus. Mr Hancock said: “Approving tests that don’t work is dangerous, and I will not do it.”

The Telegraph understands that a scientific panel linked to Oxford University is currently validating a number of possible tests, some made in the UK and others from China and the US, but is still to decide which ones work best. PHE appeared to wash its hands of responsibility, saying the rolling out of mass antibody testing was the responsibility of DHSC, which had put the trials in place.

The testing is tied up in non-disclosure agreements, and the Government will not tell other independent scientists also carrying out tests which products are being analysed.

A source said it could take weeks to complete the trials, ramp up manufacture and distribute the tests amid concern about false claims made for their accuracy. Last week, the Spanish government withdrew 58,000 Chinese-made coronavirus testing kits from use after it emerged that they had an accurate detection rate of just 30 per cent. “It’s worse than a toss of a coin,” one scientist told The Telegraph.

One British manufacturer has said that while it is producing hundreds of thousands of testing kits every day, the vast majority of them are being sent abroad while it awaits UK Government approval. Most of the kits have been exported to Germany and other European nations.

SureScreen Diagnostics, based in Derby, claims to  have created a finger prick test that takes just 10 minutes to give a diagnosis and is correct 98 per cent of the time.

David Campbell, director at SureScreen, said: “We would provide out kits if we were asked, but we’ve not been asked yet. We’ve got a very good test and we are ready and able to provide it if necessary.

“We’re currently in discussion with the British government about getting them verified and passed for use here.”

Mr Campbell said he was optimistic that DHSC’s Oxford panel could approve the test by next week and the company could begin making 500,000 weekly for distribution.

Mr Johnson has called the antibody kits “game changing” because people would know if they had immunity, allowing them to return to work or visit elderly relatives without fear of infecting others with Covid-19.

Thousands of NHS workers could be brought out of self-isolation, and the quicker the tests are rolled out, the more swiftly the lockdown could be eased and the economy put back on track.

On Thursday a Downing Street spokesman accepted there was a necessary delay. “The work is ongoing to approve the tests,” he said. “We are looking at nine different tests. We have already set out the vital importance of these tests being accurate, we must make sure that the tests are accurate and as soon as a test is approved we will announce it publicly.

“Tests have been supplied to us which have not met the required levels of accuracy and would not be right to be approved.”

But another leading UK developer of antibody kits said it could take several weeks for their product to get the green light and expressed scepticism about other kits being ready for use sooner than that.

Mologic, based in Milton Keynes, is currently trialling a prototype testing kit at Liverpool University’s School of Tropical Medicine, with tests carried out on 400 healthcare workers.

The Government has refused to tell the university what kits are being trialled at Oxford, meaning that work is overlapping but scientists are unable to share their findings.