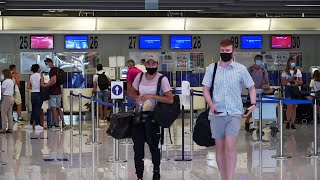 Five British holidaymakers will be forced to quarantine after EasyJet overbooked a flight from Croatia to London amid the scramble to get back to the UK before new restrictions kicked in.

Jordan Martin, a construction quantity surveyor, and four other travellers were booked to return to Gatwick from Split, in the south of Croatia, at 10.20am on Friday in time to beat the last-minute restrictions.

But after arriving at the airport, they were told the flight had been oversold and were instead offered seats on a plane at 9pm on Saturday – meaning they missed the cut-off period by 17 hours.

“It is so frustrating,” Mr Martin told The Telegraph. “How could they overbook a flight, especially in these current times? I booked the tickets about two months ago, so I should have been on the list of people who were supposed to be on that flight.

“It’s not that hard to count how many people have requested a seat. It’s very irritating. I am supposed to be at home now, unpacking and seeing friends and family, but now I have to stay indoors for 14 days. It’s going to have a massive effect.”

Mr Martin, 26, who lives in Clapham, south-west London, has already informed his employer that he will not be able to come in to work on Monday morning.  “My boss was not angry, but he was not exactly pleased either,” he added.