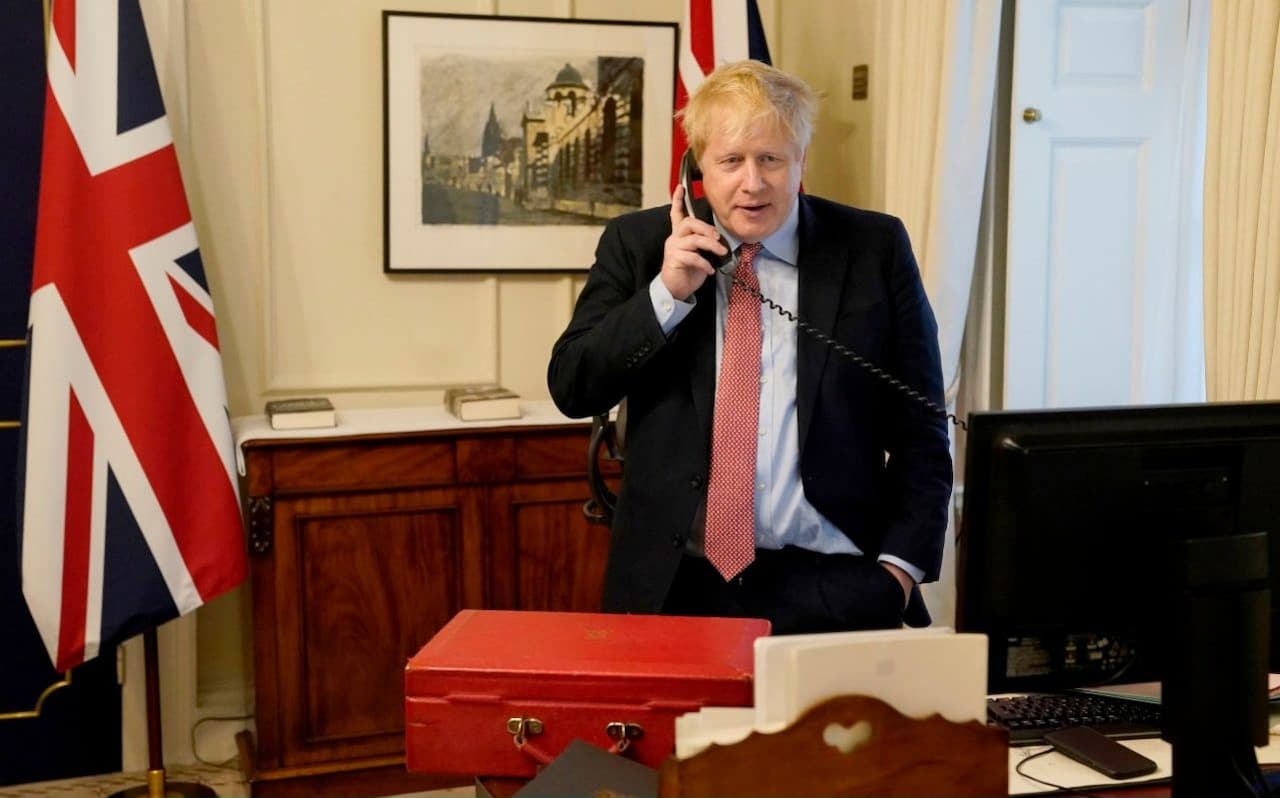 For 10 days Boris Johnson had done his best to present a brave face to the world as he fought his own personal battle against the coronavirus that has brought Britain to its knees.

Almost as soon as he started to complain of symptoms a week last Thursday he was insisting that it was business as usual, chairing a meeting of companies making NHS ventilators by conference call.

That Thursday evening, March 26, he took part in the first “clap for the NHS”, standing outside his new home alongside Rishi Sunak, the Chancellor, in Downing Street.

The following morning he chaired his regular meeting of the coronavirus “war Cabinet” of top ministers before disclosing his condition in the first of several video updates for social media.

“Be in no doubt that I can continue thanks to the wizardry of modern technology to communicate with all my top team and lead the national fightback against coronavirus,” he said.

Wearing an NHS pin badge, he paid tribute to the nurses and doctors helping Britain through the pandemic, signing off: “We are going to beat it – and beat it together.”

Mr Johnson was put into isolation in Downing Street, given the run of the Chancellor’s study and sitting room in No 11, several floors below the flat he shared with Carrie Symonds, his pregnant fiancée.

The interconnecting doors linking 10, 11 and 12 Downing Street were locked shut and video conferencing screens were being installed to allow Mr Johnson to direct operations.

As he strictly followed the rules of self-isolation, he was treated like a prisoner with meals and his official papers left at the adjoining door to No 10 for him to collect.

Ever the journalist, Mr Johnson set his own deadline for beating the disease, writing on Twitter that he would be “self-isolating at home for the next seven days”.

Over the last 24 hours I have developed mild symptoms and tested positive for coronavirus.

I am now self-isolating, but I will continue to lead the government’s response via video-conference as we fight this virus.

Together we will beat this. #StayHomeSaveLives pic.twitter.com/9Te6aFP0Ri

His optimism was entirely in keeping with the man known to his many friends going back decades as a journalist on The Daily Telegraph and The Spectator magazine.

Andrew Gimson, his biographer who has known him since the Eighties, said: “He does not really believe in illness – he has never taken illness at all seriously in people who work for him.

“He will try not to take the illness seriously, but the illness may take him seriously, in which case he bloody well will be knocked out by all accounts”. Mr Gimson was to be proved right.

Before Mr Johnson became ill, there had been reports of tension between Dominic Raab, the Foreign Secretary and First Secretary of State, and Michael Gove, the Cabinet Office minister, over who would replace him, forcing No 10 to make clear that if the Prime Minister was incapacitated, Mr Raab would step in.

However, when he did fall ill, Mr Johnson made clear he remained in charge. He continued over the following 10 days to chair the regular 9.15am “war Cabinet” by video phone, as well as last Tuesday’s entire Cabinet.

He kept in touch with the public through videos that he posted online.

While he intended the messages to be morale boosting, Mr Johnson’s flushed appearance shocked many. In a video last Wednesday, he praised the NHS staff and Army reservists shipping NHS masks around the country, adding that testing was “how we will unlock the coronavirus puzzle”.

The following evening Mr Johnson was photographed (below) grinning grimly at the door of No 11 to clap NHS carers for the second week running.

It was little surprise that Mr Johnson did not return to work last Friday as planned and instead he posted another video, in which he said he was still laid low with a high temperature and urged people not to defy the lockdown during the weekend’s warm weather.

His work-rate was not letting up. He chaired a meeting of his key ministers on Friday and was then briefed over the weekend on the Government’s response to coronavirus. There was a shock when Miss Symonds, who has been staying away from Downing Street after other staff fell ill, disclosed on Saturday evening that she had been having symptoms for a week.

But yesterday morning, Matt Hancock, the Health Secretary who was diagnosed on the same day as the Prime Minister and had returned to work last week, said Mr Johnson was “OK”.

Mr Hancock added that he had been “talking to him every day, often several times a day, throughout this, throughout the time that both of us were off. He has very much got his hand on the tiller but he has still got a temperature.”

Yet there were warning signs. Cabinet ministers had told MPs that Mr Johnson had become frustrated about the few “hours that he is able to work”.

The MP said: “You don’t hold the camera up and look grim – it is not going to inspire the nation. Unfortunately he has written too many books on Churchill and wants to be the guy. He needs to be Boris Johnson and not try to be someone else.”

Within hours, Mr Johnson was on the way to hospital for in all likelihood – according to Dr Sarah Jarvis, a GP of more than 30 years standing – checks on oxygen levels in his blood, X-rays, scans of his chest and blood tests.

She told the BBC: “Given he is staying in charge of the Government that suggests to me that he probably has moderate disease.”

Dr Jarvis said that patients with “moderate to severe symptoms” of Covid-19 could get to the stage where “walking up the stairs can leave them short of breath and at the severe stage may becoming more breathless at rest.”

Last night, his opponents were united in sending him messages of support. Ed Davey, acting Leader of the Liberal Democrats, said: “Wishing Boris Johnson the best for getting through this, and a full, fast recovery.”