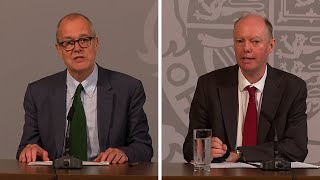 The Government said that, as of 9am on Sunday, there had been a further 12,872 lab-confirmed cases of coronavirus in the UK, although the figure is likely to be skewed downwards by a weekend lag in reporting.

According to the worst-case scenario, there would have been upwards of 40,000 cases confirmed. Daily infections would need to rise by a further 37,128 on Sunday’s total to hit 50,000 by Wednesday October 13, as suggested by the model.

The Government said a further 65 people had died within 28 days of testing positive for Covid-19 as of Sunday, fewer than one third of the total predicted by mid-October in the worst case scenario.

Experts have accused officials of attempting to “scare people” into accepting new lockdown restrictions to contain the virus.

Professor Karol Sikora, a former director at the World Health Organisation, suggested the “implausible” graph had damaged public trust in the Government and said: “If you try to scare people with worst case scenarios, it doesn’t work. Instead, they just think the whole thing is silly and they lose trust in everything else you say.

“I can’t see any value in that graph at all. The more you test, the more cases you find – and of course testing has been prioritised towards areas with higher infection rates. We need a sensible discussion of the risks posed by coronavirus, not doomsday scenarios based on shaky science.”

It later emerged that the Government’s suggestion that infections were doubling every seven days (one of the scenarios illustrated below) was based largely on studies involving only a few hundred cases rather than large-scale testing data.