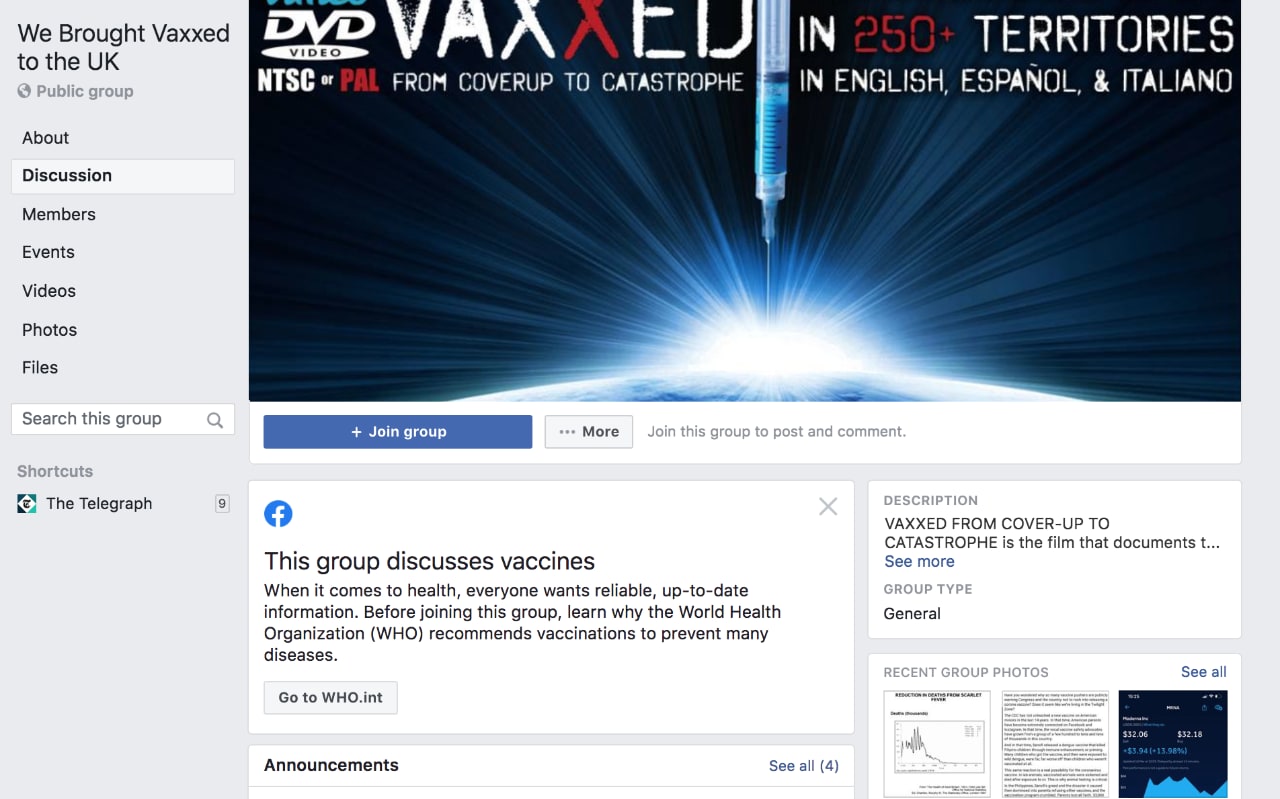 Two weeks ago an anti-vaccine Facebook group called ‘We Brought Vaxxed to the UK’ started to disseminate a new and dangerous contagion: misinformation about Covid-19.

It’s posts promote xenophobia, conspiracy theories and erroneous medical information about the disease and how it might be treated.

One post claimed China was using the outbreak to cull the elderly, another suggested hand sanitiser causes cancer and a “probiotic yogurt suppository” was recommended as a cure.

The group is just one of some 50 social media accounts being tracked by the Center for Countering Digital Hate (CCDH), a charity dedicated to preventing false and divisive lies and myths spreading across the web.

“I took our file on these groups to Facebook executives to express our deep concern”, said CCDH chief executive Imran Ahmed. “But nearly two weeks later, they have still not taken action to enforce their own policies and remove them.”

Instead, believes Ahmed, the social media giant is trying to weather the storm through a PR offensive. “This to obfuscate the central truth: that even when hate, bigotry and misinformation is pointed out to them, Facebook rarely shows the will to act,” he says.

CCDH has been tracking a sample of health misinformation groups – with a total membership of 800,000 – since early February, when the Covid-19 pandemic was still in its infancy.

Posts promoting establishment cover-ups, allegations that billionaires are making us ill for profit and pseudoscientific studies claiming vaccines will put your children in grave danger, have long been these group’s stock in trade.

But in the last few weeks, says CCDH, they have pivoted to focus on Covid-19, promoting conspiracies and fake news across millions of users’ timelines. At the same time, new groups dedicated to spreading misinformation about Covid-19 have sprung up.

They are an odd mix of new and existing groups ranging from anti vaccination campaigners to right wing extremists to Russian-linked peddlers of fake anti-western news. An important theme is coronavirus denial.

In ‘We Brought Vaxxed to the UK’, some 4,300 members have been trading posts which question the veracity of the coronavirus pandemic. One post claims the outbreak is just another  “deadly measles story” pedalled by “the media”. Another describes Covid-19 a “Common Cold Hoax”, suggesting it should be ignored.

There is a confusing mix of truth and lies. CoronaVirus Truths, an open Facebook group with close to 1,000 members, includes posts sharing World Health Organization advice alongside conspiracy theories.

One video from Kate Shemirani, an “influencer” with 17,000 Facebook followers who describes herself as a “natural nurse in a toxic world”, was viewed more than 400,000 times.

“Just before Christmas we had [been told] … we’re all going to die of measles,” she says, seven minutes into the video. “Now we’re suddenly all going to die of coronavirus. I’m not  buying any of it… I think it’s really important that we don’t just believe what the media tell us.”

Restore Liability for Vaccine Makers, a Facebook group followed by almost 9,000 people, also has dangerous misinformation about the outbreak.

After one user shared an op-ed titled “Does the coronavirus exist?” other followers of the group responded: “I for one don’t buy into the paranoia. When this is all said and done, I believe we will have fallen for a two trillion dollar scam.”

A video by Luke Smith-Anderson aka The Informed Father, a former NFL player turned anti-vax blogger who claims to “speak God’s Truth”, also made its way onto the Facebook page.

In the post, which was watched by almost 17,000 people, Mr Anderson made efforts to debunk the outbreak, claiming: “What scares me is not the coronavirus but peoples reaction, society’s reaction.. we’re buying into the mass hysteria… You guys remember the measles hysteria last year?”

“Anyone heard of the Zika virus,” he continued. “Mass hysteria over the Zika virus? Well, apparently that’s not a thing anymore.”

Some of the other groups tracked by CCDH encourage members to share personal testimony of how their children developed problems after vaccination, often using pictures and videos of visibly ill children.

“After the outbreak of COVID-19, we found a mother asking what to do about her child who had come down with a fever”, said Ahmed.

“Instead of encouraging her to get her child tested or to seek medical advice, they discouraged her from doing so and advised instead rubbing lemon oil down the child’s spine to draw the fever from the brain, and placing slices of onion at her feet”.

It’s not only Facebook which is being used to spread misinformation about the pandemic.

YouTube’s algorithms have a propensity to radicalise viewers by continuously serving up more and more extreme content, says CCDH, and millions of its users have already watched Covid-19 misinformation.

Examples include chiropractor, John Bergman, who posts videos, amassing more than a million views, which tell viewers to treat Covid-19 with “essential oils” and “vitamin C”.

One post shared prolifically across the messaging app, which boasts some two billion active users, claimed you have contracted Covid-19 if you cannot hold your breath without coughing for 10 seconds.

“We are dealing with two viral contagions, both of which reinforce each other,” said Ahmed. “One is biological – Covid-19. The other is social – misinformation.”

Last week a leaked report from the European Union’s diplomatic service concluded that Russian state media has been spreading conspiracy theories “with the aim to aggravate the public health crisis in western countries”.

Among some 80 samples of disinformation collected between January and March, an EU monitoring team found Russian sources pushed conspiracy theories including the idea that the coronavirus is a biological weapon or that the outbreak was triggered by migrants.

Throughout the outbreak the World Health Organization has been vocal in warning that fake news can be as damaging as the virus itself. Dr Tedros Adhanom Ghebreyesus, director of the WHO, has repeatedly said that the world is fighting an “infodemic” as well as a pandemic.

“At WHO, we’re not just battling the virus; we’re also battling the trolls and conspiracy theorists that push misinformation and undermine the outbreak response,” he said.

But conspiracy theories have continued to abound. In the UK, social media firms will be called in to Parliament after the extended Easter recess to explain what they are doing to combat the spread of false information.

“The deliberate spreading of false information about Covid-19 could have serious consequences,” said Julian Knight, Digital, Culture, Media and Sport Committee chairman. “Much of this is happening on social media through private channels, putting the onus on friends and family to identify whether the information they are seeing is misleading.”

“Tech giants who allow this to proliferate on their platforms are morally responsible for tackling disinformation and should face penalties if they don’t,” he added.

Social media giants including Facebook, Google and Whatsapp have said they are making great efforts to block fake news about vaccines and the coronavirus.

Facebook has added a post at the top of all open vaccine pages encouraging people to go to the WHO for information.

“We have partnered with the NHS to connect people to the latest official NHS guidance around coronavirus – both directly in their News Feeds and when people search on the topic to ensure people have accurate information.

“Earlier this week we expanded our third party fact-checking programme in the UK to include Reuters as well as Full Fact. We also worked with the government to help them launch a Coronavirus health information service on WhatsApp with the goal of sharing accurate and official health information to combat misinformation.

“Unlike text messages, WhatsApp bans mass messages outright and limits forwarding. WhatsApp has introduced the ‘forwarded’ and ‘highly forwarded’ labels to highlight when you should stop and think about whether you should share something that has been shared multiple times.”

In the UK the NHS has also partnered with social media giants including Google and Facebook to tackle the spread of misinformation and the WHO has partnered with Whatsapp to create an coronavirus instant messaging service.