How will the Government join forces with Apple and Google? 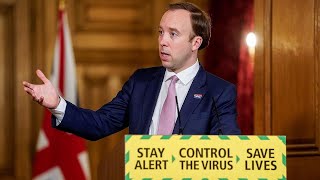 The UK will now follow Germany, Italy and Denmark among others in switching from a “centralised” approach to a “decentralised” one.

However, officials are concerned about the reliability of the technology used by Apple and Google, with suggestions that it is unable to tell whether a contact is one or three metres away.

The NHS model was better at assessing the distance between users, but was blocked by the vast majority of Apple phones.

The Apple and Google system provides countries with the building blocks to create their own versions of the decentralised app.

Mr Hancock now hopes to make a hybrid app that combines the tech giants’ bluetooth system but includes the NHS app’s capability to accurately measure how far apart people are.

“We discovered a technical barrier that every other country building their own app is also now hitting,” Mr Hancock said.

“We found that our app works well on Android devices, but Apple software prevents iPhones being used effectively for contact tracing unless you’re using Apple’s own technology.”

He said the Government had kept working with the companies and testing their products and would now work with them to develop a new model.

“Of course, we’ve been testing Google and Apple’s product too and as we did this, we found that it does not estimate distance well enough,” Mr Hancock said.

“Measuring distance, of course, is mission critical to any contact-tracing app. So as it stands, our app won’t work because Apple won’t change their system, but it can measure distance. And their app can’t measure distance well enough – or not to a standard that we are satisfied with.

“[In an attempt to find a solution] we’ve agreed to join forces with Google and Apple, to bring the best bits of both systems together. We’ll share our algorithm and the work that we’ve done on distance calculation and combine that with their work to deliver a new solution.”

Both the Apple and Google model and NHS app use smartphones’ bluetooth connections to log when people come into close physical contact, potentially spreading the virus. The apps are then designed to send alerts out to users when someone they have had contact with tests positive for Covid-19 or reports symptoms.

The main difference between the systems is that tech giants’ “decentralised” app keeps all the users’ data on their phone, whereas the NHS’s “centralised” model saw data sent back to a Government server where it could be analysed.

NHS officials had argued a key benefit of their centralised system was it would allow the health service to rapidly track where infection hotspots were breaking out.