‘I’m a widow with a husband’ 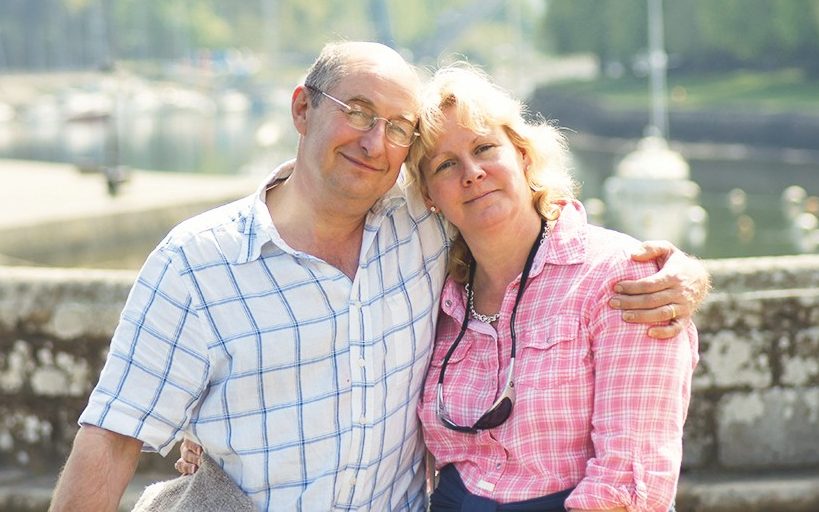 ‘It was a Friday evening and my husband Bruce and I were sitting down to watch Have I Got News for You, as we always did. But that night, as the panellists kept cracking jokes, I noticed Bruce wasn’t laughing. He seemed to have switched off. I assumed he was just preoccupied with work, but as the weeks went by even our eldest son Alex, then 15, noticed a difference.

Bruce and I met in 1986 while working at the Royal Devon and Exeter Hospital. I was an intensive-care nurse and Bruce was a senior registrar. He was kind, intelligent and incredibly articulate. We laughed together a lot, and went on to get married and have three children.

The change in Bruce started in 2009, when he was 54. By then, he was an intensive-care consultant, also advising the House of Lords on the flu pandemic that was unfolding at the time. He was overloaded with work and his GP suspected burnout, so prescribed antidepressants.

Then, a year later, Bruce rang me one morning on his drive to work. He’d been listening to the radio and was phoning because he couldn’t remember what a garden gnome was. It was a sign of what was to come. Over the next couple of years, Bruce increasingly struggled to remember words. An MRI brain scan showed a small change to his left temporal lobe, but when the doctors wanted to investigate further, he got very defensive. It took a year of nagging for him to finally see a specialist in 2012.

At the examination, Bruce was shown a picture of a shell but couldn’t name it. He described it as ‘a device in the sea that a creature would live in’. Watching him get exasperated as his mind failed him was very difficult, and by the end of the appointment our greatest fears were confirmed: Bruce was diagnosed with dementia.

My heart was broken. I just wanted to hug him and face it together, but instead Bruce was angry and frustrated. Looking back, I don’t know if that was down to the illness or him realising that his career and the life we’d built together was over. More tests followed, and in November 2012 it was confirmed that he had a rare form of dementia called primary progressive aphasia, with a life expectancy of up to 20 years. He was 57.

Bruce retired, and suddenly I was caring for him and our three teenagers. It was a huge adjustment. My husband, with his wit and love of conversation, had been replaced by someone who was closed off and difficult to live with. Losing the ability to understand humour had been an early symptom. Prior to his illness, Bruce would have spent any spare minute on restoration projects, but the dementia took away his judgment and made him unsafe. He restored a light but didn’t earth it. While cutting wood, he accidentally put the chainsaw through his boot. He tried to trim the hedge by tying ladders together, which then fell apart and left him with a broken wrist. Feeling increasingly useless, he resorted to colouring in and rug-making, and began spending a lot of time alone.

Among the dark days, there were moments of lucidity. One morning he said, ‘I love you so much. I want you to carry on with your life. I don’t want any of this – I just want to go.’ He couldn’t remember the word for Switzerland but got out a map and pointed. Telling him that I couldn’t do what he was asking was dreadful. He ended up making several attempts on his own life. It was devastating.

Bruce now lives in a nursing home, unable to speak. The disease has stripped him of emotion, insight, empathy and the ability to communicate. Bruce’s dementia has made me feel like a widow with a husband: half-grieving, half-living. He’s increasingly unresponsive, but recently he looked at me, smiled, then held my face in his hands and kissed me. It was a precious relief from the anger and sadness that is otherwise always swirling.

The walls of Bruce’s room are covered with pictures of the children. Both Alex, now 25, and Christopher, 23, went on to study law, while Lily, 21, is doing medical science. I’m so proud of them. It breaks my heart that I can’t share that with Bruce, but at least I know that, with my children’s support, we will face the future together.