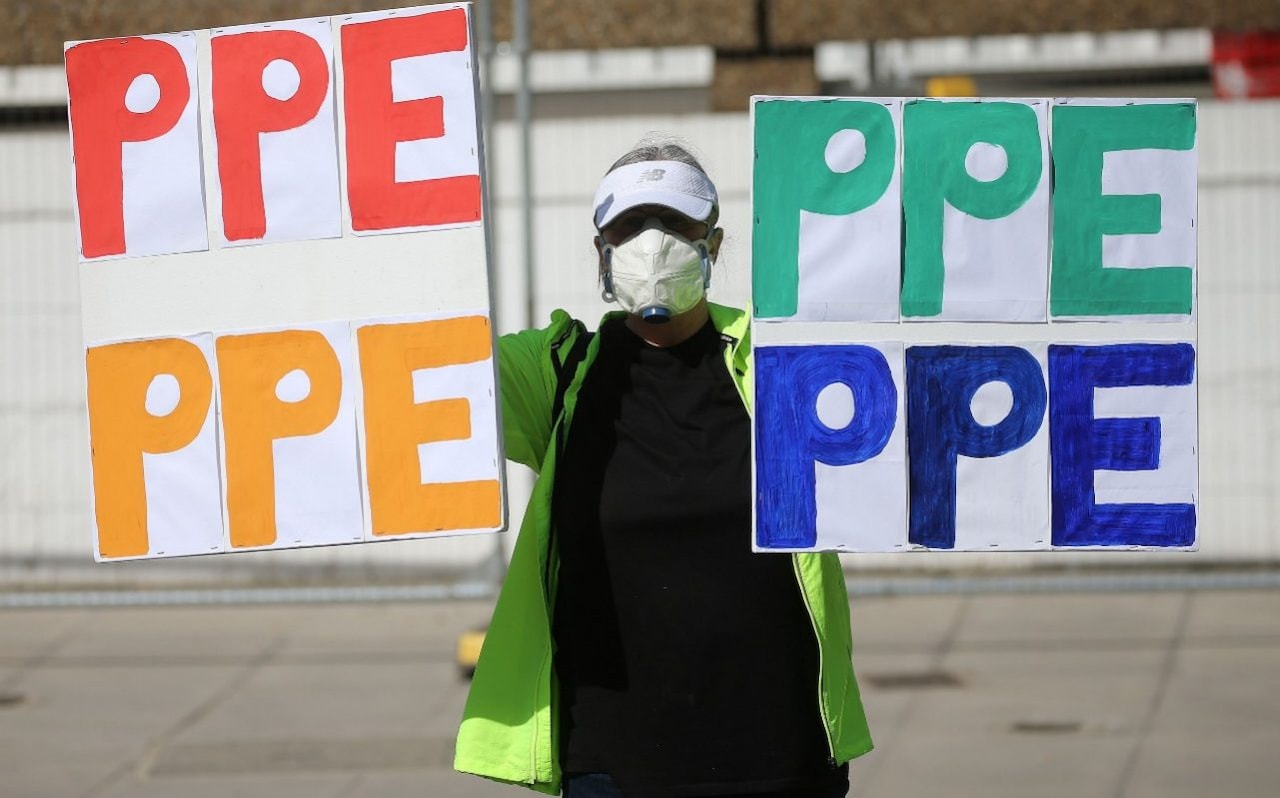 Britain is facing a shortage of the gowns required to protect medical staff against coronavirus, with NHS hospitals resorting to flying in their own stocks from China.

Senior health officials disclosed that major NHS hospitals have been forced to try to source protective equipment from China and commission flights back to the UK in an attempt to boost their supplies.

The disclosures emerged alongside a new Government plan to tackle dangerously low supplies of personal protective equipment (PPE), with any company that can produce such kit now asked to sign up.

The strategy says that current NHS stocks are propped up by donations of 1.2 million goggles and masks from companies such as B&Q. On Saturday, the Health Secretary announced that 19 healthcare workers had died after contracting coronavirus, after he came under fire for the failure to provide sufficient equipment.

The medical workers include a consultant who had appealed to the Prime Minister about a lack of PPE days before he was admitted to hospital. The figure later rose to 23, after it emerged that two porters who worked at the John Radcliffe Hospital in Oxford, had both died with Covid-19, along with a nurse from Cardiff and another nurse from Worcestershire.

On Saturday, leaked memos warned of a “national shortage” of long-sleeved gowns, which are required for those treating coronavirus patients.

In correspondence seen by The Telegraph, Kingston Hospital NHS Foundation Trust in Surrey warned on Thursday that supplies of disposable gowns could run out this weekend, while the chief executive of Mid Yorkshire NHS Trust warned of a “very limited supply” of such gowns.

Kingston hospital said it had managed to “secure more gowns” on Saturday night, but NHS Providers, which represents all trusts, warned that the supply across the country was “hand to mouth”.

In an email sent on Thursday evening, Martin Barkley, the Mid Yorkshire chief executive, said: “I fully recognise the huge anxiety staff feel about this issue. Every day you are coming into work, leaving your families, putting yourselves in what must feel like a vulnerable and scary position in order to do the right thing by our patients. I want to assure you the trust is doing everything it can to secure further stocks.”

Both trusts told of a “national shortage” of such kit, with NHS Providers on Saturday issuing an alert about “critically low levels of stock of clinical gowns in some trusts” despite an overnight delivery of supplies on Friday.

It came hours after Public Health England relaxed its guidance, saying that medical staff could wear coveralls – one-piece suits with a hood – if gowns were not available. Doctors said they have felt like “lambs to the slaughter” treating patients without such protection.

One senior official involved in procurement said London hospitals had been forced to negotiate directly with companies in China and to commission flights back to the UK, as central stocks “evaporated” in recent days. He said NHS trusts felt they had no option, as they were not being given information about what stocks they could secure from the Department of Health, and when it would arrive.

“The large teaching hospitals went out shopping in China, anywhere they could get their hands on these products, commissioning planes and negotiating with Chinese companies. This is some of the biggest market trading outside a trading floor that anyone has ever seen.”

Other countries such as the US “have been out in Chinese factories basically writing cheques” as NHS trusts were forced to enter their own negotiations, in desperate scenes, the official said.

Mr Hancock said doctors should “make a judgment at the time” about whether or not to work without PPE, which Sir Keir Starmer, the new Labour leader, described as an insult.

A spokesperson for the Department of Health said it was working “around the clock” to give medics the PPE they require.

“The NHS will receive a further 200,000 gowns in the next week, which will be delivered where they are needed to address any immediate stock issues,” they said.

Separately, The Telegraph can disclose that Public Health England and the NHS took four years to publish updated guidance on controlling the spread of infections in hospitals after the New and Emerging Respiratory Virus Threats Advisory Group (Nervtag)  of advisers suggested that intensive care units should be designated as “hot spots” in the event of an influenza pandemic.

The guidelines, which would mean all doctors operating in such units receiving the highest level of PPE, were only updated earlier this month, despite Nervtag issuing its recommendations in 2016.

The Government issued a plea to all industries asking any firms that could produce protective equipment to come forward. Firefighters and the Army have been drafted in to improve distribution of equipment, but health officials are concerned that there are not enough stocks.

A new 25-page Department of Health plan on PPE, published over the weekend, calls on any business able to produce protective kit to start doing so now. It says stocks have been boosted by 240,000 goggles and safety glasses from the Kingfisher Group, which runs B&Q and Screwfix, with 700,000 masks from Airbus and other firms.

The document says officials have been working with industry partners such as the Royal Mint, Burberry, Rolls-Royce and McLaren to produce gowns, but suggests far more companies need to come forward.

Dr Chaand Nagpaul, who chairs the British Medical Association council, said: “No doctor should ever have to put their lives at risk but I’m afraid that is exactly what is being asked of them.

“The reports from Yorkshire are not isolated examples. We have heard horrendous stories from doctors up and down the country – in Manchester, the West Midlands and London – who simply do not have the gowns needed to keep themselves and their patients safe, in line with official guidance. This looks like a national shortage. We have also heard multiple reports of limited supplies of FFP3 face masks or masks that when they do arrive, simply do not fit.

“It is insulting to suggest that doctors are stockpiling or wasting PPE when the real problem is a clear lack of sufficient supplies on the ground. I never thought I’d see rationing introduced on the front line but that is exactly where we are. Without significant intervention we are facing a real disaster.”

Chris Hopson, chief executive of NHS Providers, said on Saturday: “We need to rapidly move to a more sustainable, rather than hand to mouth, position.”