No evidence yet to back link between coronavirus and mystery syndrome in children, experts say 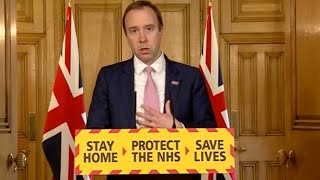 A similarly-worded warning was issued by the Paediatric Intensive Care Society and posted on its official Twitter account. Public Health England (PHE) and the NHS were ordered to investigate a possible link between coronavirus and the illness in children.

“It’s a new disease that we think may be caused by coronavirus and the Covid-19 virus,” Mr Hancock said. “We’re not 100 per cent sure, because some of the people who got it hadn’t tested positive, so we’re doing a lot of research now but it is something that we’re worried about.”

Around 20 children have been diagnosed with the syndrome so far, it is understood. Of those, around half tested positive for Covid-19, while the other half did not. At least 12 have been transferred to intensive care after suffering inflamed hearts and kidney problems.

But scientists and doctors advising Societi, the UK Kawasaki disease foundation, said on Tuesday that hospital admissions data did not yet point to a link with coronavirus.

The group, which includes doctors from Great Ormond Street and Bristol Royal Hospital for Children, said it welcomed the PHE investigation but pointed out that admissions for Kawasaki disease had fallen compared to the same period last year.

In a statement, the group said: “Fewer cases of Kawasaki disease than would be normally expected at this time of year are currently being seen, not more.

“Kawasaki disease is a seasonal inflammatory disorder peaking in the winter and spring, and whilst no infection has ever been proven to be the sole trigger, the scientific community believe that any one of many infections may trigger Kawasaki disease in susceptible children.

“We are aware of recent delayed presentations of Kawasaki disease because of initial incorrect diagnoses of Covid-19, resulting in adverse coronary outcomes due to delayed institution of treatment. During the last Sars epidemic, the same links to new cases of Kawasaki disease were reported, but these have since been disproven.”

A source on the committee said there was a level of “anger” at the decision to make the NHS alert public before gathering enough evidence to prove a link to coronavirus.

Meanwhile, other countries announced that they had launched similar investigations into a reported rise in children needing critical treatment after contracting coronavirus.

In northern Italy, one of the world’s hardest-hit areas in the pandemic, doctors have reported large numbers of children under the age of nine with severe cases of what appears to be Kawasaki disease.

The Spanish Pediatric Association said doctors had seen children either testing positive for Covid-19 or its antibodies suffering abdominal pain, vomiting and diarrhoea in the last two weeks.

The children were otherwise in good health but their condition could deteriorate within hours into shock, with tachycardia and hypotension. Most cases were school aged, with symptoms overlapping with Kawasaki disease or toxic shock syndrome, the organisation said.

Profess Simon Kenny, the NHS national clinical director for children and young people, said: “Thankfully, Kawasaki-like diseases are very rare, as currently are serious complications in children related to Covid-19, but it is important that clinicians are made aware of any potential emerging links so that they are able to give children and young people the right care fast.

“The advice to parents remains the same – if you are worried about your child for whatever reason, contact NHS 111 or your family doctor for urgent advice, or 999 in an emergency. And if a professional tells you to go to hospital, please go to hospital.”

The Department of Health said officials were not aware of any confirmed deaths from the new syndrome.