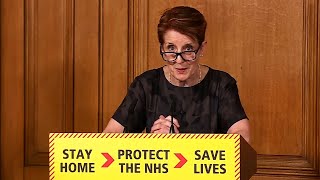 Britain’s coronavirus lockdown began to fray on Wednesday night as official figures showed an “uptick” in the number of people using transport.

The number of those using their cars and public transport, which had been consistently dropping since strict social distancing measures were introduced, rose for the first time at the beginning of this week.

It is feared that the sunny forecast for the weekend, which could see temperatures of 20C in London, will prompt more people to go break the rules and go outside and socialise as the Easter holidays begin.

Mervyn King, the former Governor of the Bank of England, warned that there could be a “rebellion” if the measures are enforced for too long.

Many self-employed people who have been told that they will not receive money from the Government until June now feel that they have no choice but to return to work, a Government adviser told The Telegraph.

It came as Alok Sharma, the Business Secretary, said he recognised “the extreme disruption” to people’s lives but warned that a “dangerous” second peak could develop if the restrictions were lifted too early.

“People will understand across the country why we have put these restrictions in place, and the Prime Minister was very clear they were for an initial three-week period and we would review them,” he told a press conference.

“But what’s also really important is that, if we stop these too quickly, there is a possibility that that massive effort people have made across the country is wasted and we could potentially see a dangerous second peak. We absolutely want to avoid that.”

Police-enforced restrictions on movement mean people can only leave their house to exercise, shop for essential items or go to work if they cannot work from home.

Lord King said it was “unrealistic” to think the lockdown could continue for “months and months on end” and called for a gradual exit strategy to protect the economy and citizens’ well-being.

Data released from the Department of Transport – illustrated in the above graph – showed that after consistently dropping from March 23, when the lockdown was announced, the number of people travelling on buses and Tubes in London rose slightly on March 30.

The numbers of those using their cars and vans rose by 10 per cent on the same day, from 27 per cent of normal levels on the Sunday to 37 per cent on Monday.

Professor Susan Michie, director of the Centre for Behaviour Change at University College London and a member of the Scientific Pandemic Influenza Group on Behavioural Science which advises the Government, said people going to work still make up around 30 per cent of the trips outside the home.

Describing the figure as “quite a concern”, she said that one group of people who are still working is the five million self-employed who will not receive any money until June under support measures announced by the Chancellor last week.

“A lot of them, because of their circumstances, will carry on working – they have families to feed and they have no money coming in and that is a really urgent issue,” Prof Michie told The Telegraph.

She also raised concerns that a lot of people were going to workplaces where social distancing measures of keeping two metres apart were not being enforced.

“We know that adherence [to lockdown] gets worse as time goes on generally, but is also worse among people who are financially insecure or on low incomes and also among those who are worried about access to provisions such as food or water,” she said.

Prof Michie said the Government now needs to get on the “front foot” and incentivise people to stay at home.

“We are only a week in and it is important to think about the problems that are likely to start as time goes on,” she said. “There are financial and practical pressures, issues of boredom, frustration, depression and for people living on their own, loneliness. Those things increase over time, and even more so for people in financially insecure circumstances.”

She said that as time goes on people might lose the “motivation” to stay indoors and “as the weather gets better more and more people will want to be outside”.

Professor John Ashton, former president of the Faculty of Public Health, said compliance with the lockdown is dependent on trust and “trust in the Government is fairly low because they have failed to be open and transparent from the beginning”.

“I said from the outset that they need to take the public with them, but they were treating people like children,” Prof Ashton said. “If you want people to behave like adults then you have to treat them like adults and then they will play their part.”

He said that among the failures in the Government response to the pandemic has been a failure to be honest about testing capability and personal protective equipment and a failure to share data even among medical professionals.

“I think it is a danger that the lockdown might not stick,” he added.

Prof Ashton said that one way in which the Government could help enforce the measures was to roll out testing which would allow the restrictions to be altered according to need.

However, the authorities on Wednesday night insisted that the vast majority of people are complying with the rules.

The deputy chief medical officer for England, Professor Jonathan Van Tam said: “I know how incredibly disruptive this has been for people across the country, but these measures are essential to help support the NHS.

“Whatever the weather, we all have a shared responsibility to protect those around us, and the single most important action we can all take in fighting coronavirus is to stay at home in order to protect the NHS and save lives.”

A Government spokesman said: “Our message is clear – people should stay at home. This will save lives, protect the vulnerable and protect the NHS. The restrictive measures the PM announced last week remain in place. Police across the UK have the powers they need to enforce these where necessary.”

A spokesman for the National Police Chiefs Council said that they had seen an “overwhelming response” to the lockdown measures last weekend and are hopeful that the public will continue to abide by the rules this weekend.