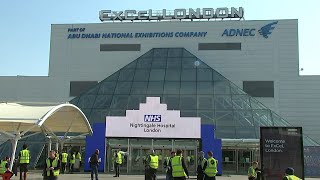 NHS nurses have been ordered to stop wearing their uniforms outside work after being harassed outside hospitals and accused of “spreading the virus”.

Frontline medical workers have been told to travel to and from work in plain clothes to avoid being abused by members of the public, according to official instructions seen by The Telegraph.

An email setting out the new rules was sent to nurses across the country on Thursday, only hours before a nationwide round of applause was held in honour of the NHS.

It comes after doctors and nurses were targeted by muggers who attempted to steal their identity badges outside hospitals.

The email, sent to NHS Blood and Transplant nurses, read: “From tomorrow until further notice, can all nurses please no longer wear their uniforms to travel to and from their place of work. You will need to take uniforms with you and change.

“There have been reported cases of some nurses being challenged by the public, so this is not just to protect you from carrying anything on your uniforms but from potential abuse. Please ensure you have your ID badge on you at all times when travelling to work and on work business, as you may be required to travel and [show] reasons for being there.”

One nurse, who did not wish to be named, said staff had been abused outside hospitals and in the street by members of the public who accused them of spreading the virus.

“I know a lot of nurses now won’t pop to the shop if they’ve got uniform on,” she told The Telegraph. “In all honesty, I’m not really surprised – I’ve been spat at coming out of a hospital late at night, in uniform.

“I’m scared that incidents are going to increase, though. I think people are scared and nurses are visible, easy targets.”

The nurse added that some hospitals have closed their public entrances after thieves targeted medical workers as they left to go home after long shifts. The thieves are thought to want ID badges in order to take advantage of the free food offered to NHS staff by fast food restaurants and supermarkets.

Last week, two doctors at Lewisham hospital, in south London, were attacked while walking through a nearby park by muggers who unsuccessfully tried to grab their badges before running off. All staff at the Lewisham and Greenwich NHS Trust’s two hospitals have now been told to hide their lanyards when entering or leaving work.

Ruth May, NHS England chief nursing officer, said: “Our NHS staff are pulling out all the stops in the face of an unprecedented global health threat, so these reports are really concerning.

“We have seen some extraordinary acts of generosity from businesses and the public, and this will not be overshadowed by the actions of an idiotic few, but I would urge everyone to show NHS staff the gratitude they deserve and help them to do what they do best.”