One last drink… then city ‘will be dead again’ 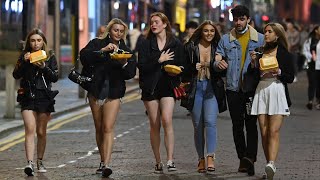 Lee Morris, 27, and his girlfriend Miah Perry, 26, were enjoying a final drink as the clock ticked down to 5pm, contemplating a city that was rapidly turning into a ghost town again.

“It’s mad,” said Mr Morris, who lives a couple of miles from the city centre. “You can see the footfall through the city centre has already dropped hugely. It was dead during the first national lockdown, and I think it’ll be like that again.”

He and his partner will have to order a main meal if they want to drink in a pub again, but the closing of gyms was far more distressing for Mr Morris. He works out five times a week and said: “I’ve lost that, and it’s tough not being able to train.”

Mojo, an independent cocktail bar in Liverpool city centre, closed its doors on Tuesday night and, with no food served, there’s no wriggle room around the new rules. “The writing has been on the wall, really,” said Peter Williams, a barman now fearing for his future. “It is a massive worry. You think venues like ourselves could be forced to close [indefinitely].”

Peter Kinsella, the owner of Lunya, a Spanish bar, restaurant and deli in the city centre, said his venue will stay open, but fears the drop in footfall will be catastrophic.

“Businesses are fearful of closure, permanent closure, because trade has disappeared this week. No one is out,” said Mr Kinsella. “If this goes on for too long, to Christmas or past Christmas, we are in trouble, really serious trouble, at that point. Many people just come here for drinks in the bar. We have lost all that trade.”