Only one in 100 deaths in England and Wales linked to coronavirus as outbreak took hold, figures reveal 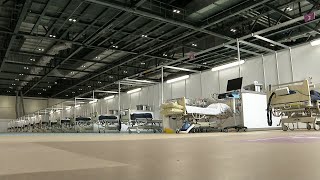 One in 100 deaths in England and Wales were linked to coronavirus as the outbreak took hold, official figures show.

The new data from the Office for National Statistics (ONS) suggests the death toll in the first weeks of the outbreak was a quarter higher than has been reported.

However, the release comes with an 11-day time lag, with officials braced for a far higher spike in coming weeks.

It comes as the latest NHS data from UK hospitals showed a more than doubling of deaths just four days, with 381 new deaths reported on Tuesday, bringing the toll to 1,789.  They included 28 patients with no underlying health conditions, one of whom was a 19-year old man.

The NHS data only includes patients who were treated in hospital, whereas that from the ONS examines all deaths registered where coronavirus was suspected or confirmed, regardless of where it occurred.

However, so far the ONS weekly statistics only cover the start of the outbreak, with a cut-off point of March 20. The figures show 210 deaths in England and Wales where Covid-19 was mentioned on the death certificate, compared to the 170 deaths reported by NHS England and Public Health Wales over the same period.

This data shows that, in the week ending March 20 alone, there were 181 deaths linked to coronavirus. By contrast, there were 1,841 deaths from flu and pneumonia, itself lower than the five-year average of 2,120 such deaths.

The new statistics also gave a breakdown of age and gender for deaths linked to Covid-19, but only for those deaths registered before March 20 – a total of 108. Nearly three-quarters involved those aged 75 and over, with just one involving a person under the age of 45.  Six in 10 cases were male.

The current official coronavirus death toll for the UK is 1,789, with 1,720 in England and 69 in Wales. This figure is far more up to date – tracking most fatalities within 24 hours – but only counts deaths among those treated in hospital. The ONS data shows 40 per cent of coronavirus deaths occured in London, with 18 per cent in the south-east and 15 per cent in the West Midlands.

The weekly statistics also show the total number of deaths for this time of year are down, with 10,645 deaths in England and Wales in total, compared with a five-year average of 10, 573 deaths.

Professor Sheila Bird, formerly programme leader at the MRC Biostatistics Unit at the University of Cambridge, said the new figures show the death toll among older people is around 12 times higher than for the under-65s. She said safeguarding of the older population could change this in the weeks to come.

Scientists urged the Government to work harder to provide the public with clear information instead of expecting people to interpret it from a range of different sources covering different timescales.

There was confusion last week when NHS data suggested the rise in the death toll was slowing, when in fact partial data had been released.

Prof Jim Naismith, of the Rosalind Franklin Institute and Oxford University, urged the Government to “spend some effort quite quickly ensuring consistent reporting standards for the number of deaths before they are made public”.

“Sadly we have to accept that, because deaths are very much a lagging indicator, we will not see the effect of the Government’s most recent measures in the daily number of deaths for some time.”

Professor Keith Neal, Emeritus Professor of the Epidemiology of Infectious Diseases at the University of Nottingham, said: “I support the reporting of new figures, but there is now a danger of the death figures becoming increasingly difficult to interpret. We now have figures for the UK, England and Wales and the four separate administrations. There are differences in the methodologies.

“Surveillance is about monitoring trends and this can only be done with consistent data sources,” he added, highlighting the confusion that had arisen when China changed the way it reported figures, creating an apparent spike in cases overnight.

The spike in new cases on Monday came after the NHS began to roll out testing for hospital staff. Prof  Neal said: “The big uncertainty today is how many of the new diagnoses are health care workers given that testing started yesterday.

“It is important to know how many of these are health care workers so as to interpret the trend of the previous numbers which were only hospitalised patients.”

Dr Simon Clarke, Associate Professor in Cellular Microbiology at the University of Reading, said the UK could expect to see some “distressingly large increases” in deaths, but stressed that it was important to look at trends over time rather than draw conclusions from any single day’s figures.

“The news of a further 381 deaths on the back of a lower than expected increase [on Monday] is shocking but sadly unsurprising, and we can expect to see the UK’s Covid-19 death toll continue to head higher over coming weeks,” he said.

Saffron Cordery, the deputy chief executive of NHS Providers, said: “We know that the impact of coronavirus in terms of sickness and deaths, and therefore on health and care services, is growing. But the true extent of that increase is hard to gauge.

“The death registration data published by the Office for National Statistics will – over time – help to build a more complete picture, particularly in terms of mortality outside hospitals.

“The nature of this data means that overall perspective is some way off, but it serves as a valuable reminder that in many parts of the country NHS community services are at the forefront of the battle against Covid-19.”