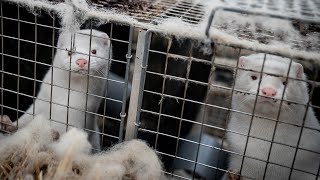 Vets in Denmark have began gassing and burning 17 million mink in a bid to halt further spread of the virus mutation.

New coronavirus cases linked to mink farms have been discovered in six countries including Italy, the Netherlands and Spain, the WHO has said. Mink farming in Britain ended in the early 2000s, although there are thought to be around 112,00 of the animals in the wild.

Professor Fiona Mathews, who chairs the Mammal Society and is a professor of environmental biology at the University of Sussex, urged the Government to fund a study into whether the virus might already be spreading in the UK’s mink population

“There’s a chance it might have jumped to cousins of the mink, like otters,” she said. “We know the virus came from animals, so it would be foolish not to look at whether it is already here. And of course there’s a small chance that it might pose a risk to humans.”

On Monday, Downing Street said there was no evidence to suggest that the strain is in the UK. The Prime Minister’s official spokesman said: “The restrictions were put in place on the recommendation of the chief medical officer overnight on Friday, and that is a precautionary measure.

“What it’s in response to is the fact there have been widespread outbreak of coronavirus in Danish mink farms with a variant strain spreading through local communities.

“We will keep our response under constant review, but the purpose of these measures is a precautionary step to safeguard UK public health. There are no fur farms in the UK, so we’re not at risk in that regard. There’s no evidence to suggest that this new strain is currently in the UK.”