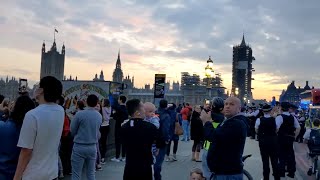 Scotland Yard said in a statement: “Officers, along with other emergency service workers, came together last night on Westminster Bridge to celebrate the work of all key workers.

“A large number of members of the public also gathered to express their gratitude. While many people adhered to social distancing guidance, it appears that some did not.

“We regularly remind our officers of the importance of social distancing where practical, and will continue to do so.”

It wasn’t just the police who felt the wrath of those who were at home abiding by the lockdown rules.

Stephen Buston wrote: “Well I give up. Four bloody weeks into lockdown – what’s the point if clowns congregate on Westminster Bridge clapping the very people that will be detrimentally affected by their behaviour.”

Another Twitter user said: “I still can’t get my head around the stupidity of this. These idiots on Westminster Bridge (including Met Police) are sticking two fingers up at the very people they are supposed to be clapping for. London will be on lockdown until 2030 at this rate.”

England cricket hero Ben Stokes was among those to criticise those who gathered on the bridge.

He said, seemingly imitating those who attended: “Let’s go to the bridge tonight and clap with loads of other people to show our support for the NHS, it’s fine if we put other people at risk as long as we get seen on camera clapping I’m cool with it.”

Stokes signed off his tweet with the word “seriously”, followed by two angry face emojis.

Radio DJ Dean McCullough tweeted to Sadiq Khan, Andy Burnham and Mr Johnson, saying: “Chaps, can one of you help us find out why on earth Westminster Bridge was exempt from social distancing guidance this evening at 8pm and Met Police stood round and allowed it? People, are, kinda, dying…”

Another man suggested that people who attended the event did not care about the NHS but just wanted an excuse to get out of the house. Other social media users labelled people on the bridge “idiots”, “morons” and “thick” and questioned why police had not move them on.