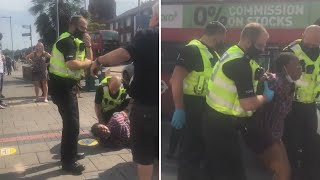 Police have been criticised after a number of officers were filmed holding a black woman to the ground shortly after she demanded a refund from a nearby jewellery shop.

Onlookers who filmed the incident said the woman appeared to have shown no signs of aggression and was not resisting when she was pinned to the pavement on Saturday morning.

In distressing footage posted on social media the woman – who is understood to work as a nurse for the NHS – was seen crying and asking why she was being arrested.

The woman – who appeared to have been handcuffed – can be heard saying: “All I did was ask for a refund. Why are they doing this to me. They listened to the white man, they didn’t listen to me. All I wanted was a refund. I didn’t break anything. I just wanted my customer rights. I didn’t damage anything. It was plastic that got smashed.”

Observers said the footage appeared to raise disturbing questions about the tactics used by some police officers when dealing with incidents involving black people.

Jasmin Davis, a stage and theatre production manager from London, wrote on Twitter: “Is this being investigated? Why are there so many officers for a clearly non threatening woman who has already been restrained? How did it escalate to restraining her on the floor when she is quite clearly cooperating and explaining what has happened?”

A woman thought to be filming the incident can be heard asking what the person on the ground has done wrong and why it takes so many officers to detain her.

The incident follows a number of recent cases in which a number of officers have been filmed holding or pinning lone black people to the ground, with some heard on camera crying and shouting: “I can’t breathe” in response to being held.