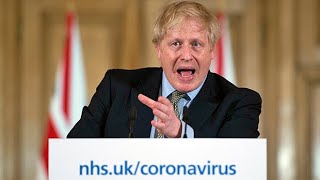 Boris Johnson has been forced to close schools and draw up plans to lock down London after a sudden surge in coronavirus infections.

The Prime Minister announced that A-level and GCSE exams this summer have been cancelled as schools prepare to shut their doors “until further notice” for the first time since the Second World War.

Some classrooms will be kept open to look after vulnerable pupils and the children of key workers such as NHS staff, emergency workers and delivery drivers.

Meanwhile, Mr Johnson warned Londoners that he could not rule out legal restrictions on travel or public gatherings as ministers prepared plans for an Italian-style shutdown of the city – which could be imposed as soon as Thursday.

The Army placed 20,000 personnel on standby to help to police the capital and ensure the delivery of vital supplies to those in most danger from the virus.

But Mr Johnson offered hope that better news might be on the way as he said a test for antibodies to coronavirus – which would be a “game changer” in the fight against the disease – could soon be available.

The developments came as:

Mr Johnson was forced to sanction measures he has consistently said he did not want to take after a meeting of Government scientific advisers warned that the situation was spiralling, particularly in London.

“So I can announce today that, after schools shut their gates from Friday afternoon, they will remain closed for the vast majority of pupils until further notice.”

He added that “exams will not take place as planned in May and June, though we will make sure that pupils get the qualifications they need and deserve for their academic career”.

Government sources said there were currently no plans for GCSE and A-level exams to be put back to the autumn, or to push back the start of the university year in September, suggesting the most likely outcome will be for pupils to be given qualifications based on predicted grades and coursework.

From Monday, classrooms will be open only for the children of key workers and for vulnerable children.

The Prime Minister said schools would be “rationalised” so that many will close altogether and others will take in children from several schools in their area. A list of jobs that qualify for key worker status is expected to be published on Thursday.

A team of Cabinet Office staff is making plans for locking down London as soon as Thursday, with restrictions on travel and other civil liberties designed to minimise person-to-person contact.

Government departments have been asked to recommend the sort of restrictions that might be needed, likely to include the forced closure of pubs and restaurants and a ban on the use of public transport for all but essential workers.

Emergency legislation, which will be published on Thursday and made law next week, will allow the Government to go even further by stopping all vehicles and arresting people who fail to comply with new restrictions, including those with symptoms who refuse to self-isolate.

Mr Johnson said: “We live in a land of liberty and we don’t tend to impose those sorts of restrictions in this country, but I have to tell you we will rule nothing out and will consider bringing forward further and faster measures where that is necessary.”

Soldiers were seen moving around the country on Thursday as military sources said plans were in place for hotels to be turned into temporary hospitals and for troops to take over guard duties at sensitive sites to free up police for other duties.

Sir Patrick Vallance, the chief scientific adviser, confirmed that a test for antibodies to the virus – which would show whether someone has had it or not and is therefore immune – was “progressing very fast”. He said it would be “critically important” in monitoring the virus and would enable those who had developed immunity to return to work.

Mr Johnson said: “From an economic point of view, it really could be a game-changer.”