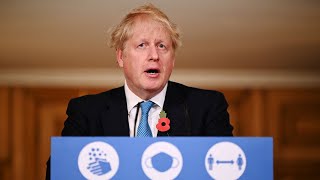 The Prime Minister was asked whether he would be able to rely on his own MPs for subsequent measures or have to rely on Labour votes after a further 18 Tories, including former Prime Minister Theresa May, abstained in the Commons vote.

“I’m very, very grateful to MPs for voting through the measures that we did yesterday and I believe that I’m right in saying that the Government was able to do it with its own votes, but obviously it was good that this was a measure that was supported by people across all political parties and that’s the right way forward in this country,” he said.

Pubs, restaurants and non-essential shops have closed their doors and people have been told to stay at home for the next month, but schools, universities and nurseries remain open.

By Mr Johnson’s side, Sir Simon Stevens, the NHS England chief executive, warned sceptics that the second wave of the Covid pandemic “is real and serious”, citing figures that show hospital admissions have risen from under 500 at the beginning of September to over 11,000.

He revealed around 30,000 staff in the health service were either off with coronavirus or having to self-isolate, and “that has an impact”.

Mr Johnson continued to express optimism that science would succeed in finding a way out of the virus crisis.

He said: “There is also the very real chance of safe and effective vaccines. The number of shots that are currently raining down on the goal is very, very considerable from the scientists and the doctors, and one of them, I believe, is going to get to get through, and get through very soon.”