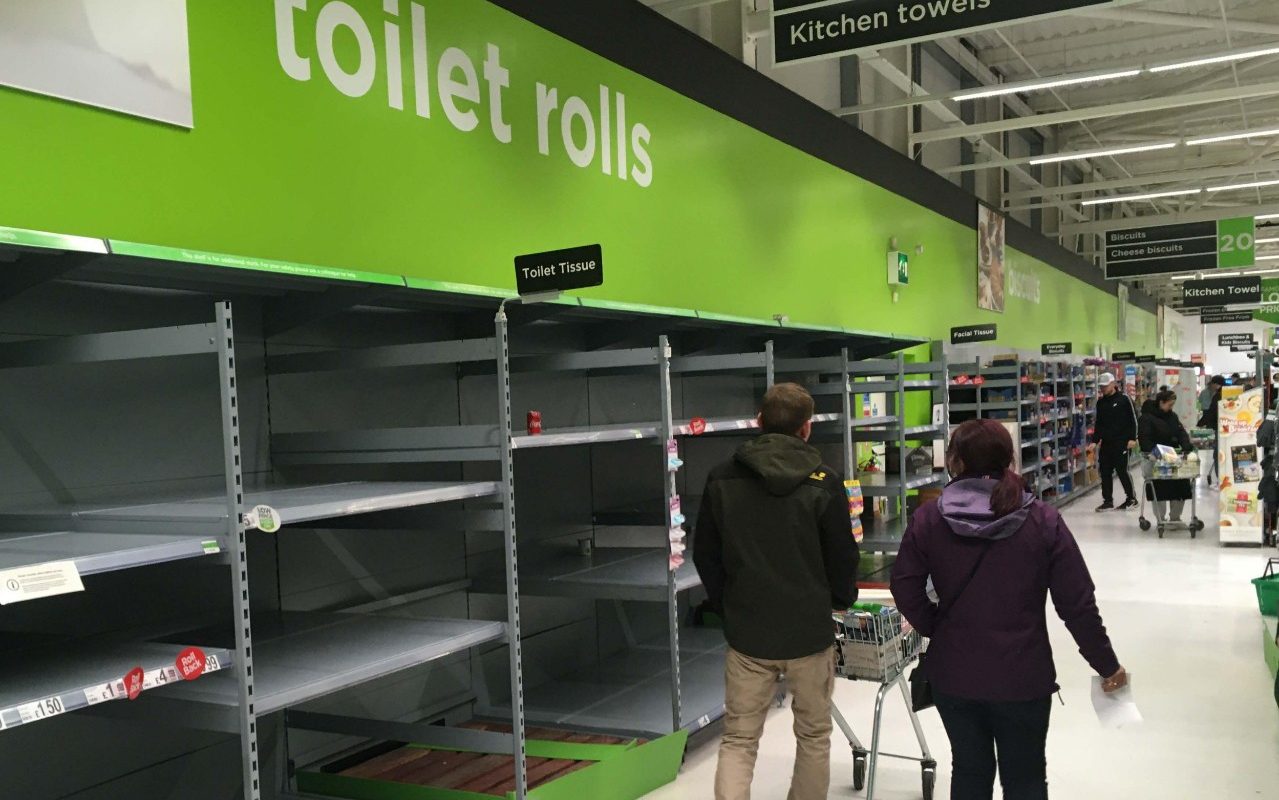 Shops have begun to refuse cash in a bid to limit the spread of coronavirus, while Sainsbury’s has set limits on certain products and made a desperate plea to shoppers to “think before you buy”.

As widespread panic buying continued, long queues snaked out of supermarkets while customers wearing surgical gloves were seen loading trolleys to the brim with loo rolls, dried and long-life goods.

Scores of people were pictured queuing at a Waitrose store in Crouch End, north London, before it opened. Other Waitrose customers reported abandoning their shopping efforts as queues wound twice around the shop.

High street fashion store H&M put up signs saying that it would be limiting cash payments to certain tills as an “additional precaution”.

Aldi announced that it was limiting purchases on all products to four units maximum due to “unprecedented demand”, and the Sainsbury’s chief executive, Mike Coupe, emailed millions of customers urging them to stop stripping the shelves.

In the email to shoppers, he said more food and essential items had been ordered from manufacturers and added that if everyone shopped just for what they needed there would be enough for everyone.

“Please think before you buy and only buy what you and your family need,” he wrote. “And please help elderly and vulnerable friends, family and neighbours with their shopping if you can.”

The supermarket is now limiting purchases of soap, hand wash, tissues, cleaning products, rice, pasta and UHT milk to five of each item and pain relief products to two items.

In many areas, Sainsbury’s and Waitrose had no online delivery slots available for at least three weeks, while shoppers reported lengthy waits just to log on to Ocado.

Wes Streeting, the Labour MP for Ilford North, warned that some shops were bulk buying supermarket items and selling them on at inflated prices.

“I’ll be making it clear that any more of this and I’ll be naming, shaming and running a boycott,” Mr Streeting said.

One customer took to Twitter to complain that her local Budgens store in south London was charging £4 for a four-roll pack of Andrex lavatory roll, despite a £2.50 RRP sign on the packaging.

Yet while supermarkets shelves were stripped as soon as they were filled, many local corner shops reported that they still had plenty of stock.

Shoppers have been urged to “think local” and get eggs and meat from smaller independent farm shops, markets or butchers.

Alex Schlagman, founding partner of the Save the High Street campaign, said: “Your local independent shops are nearby, less congested with people and will be increasingly critical in providing products and services to local communities in this period. It’s never been more important to shop local and support your local high street businesses.”

Meanwhile, supermarkets urged the government to ditch the 5p carrier bag charge to try and halt the spread of coronavirus.

Retailers who held crisis talks with George Eustice, the Environment Secretary, last week, warned that shoppers risked spreading the virus by bringing their own reusable bags from home.

A source told retail industry magazine The Grocer: “Scrapping the plastic bag charge temporarily is an interesting point, and potentially a way to try to slow the spread of the virus.”

In a similar vein, coffee chains including Starbucks have stopped accepting customers’ own cups.

With fear gripping communities, visitors to pubs, bars and restaurants plunged as consumers chose to stay at home. Data firm Wireless Social recorded a 37 per cent drop in visits on Saturday compared with the corresponding Saturday in 2019.

Hospitality firms are expected to begin laying off staff this week amid fears that an enforced lockdown could lead to further redundancies.

Nike is closing all of its stores in the US, Canada, Western Europe, Australia and New Zealand in an attempt to limit the spread of the virus.

The sportswear giant will close stores in these locations from today until Friday March 27. Its shops in South Korea, Japan and in most of China continue to trade as normal and will remain open.

Elsewhere, it has emerged that high streets and shopping centres saw a dive in footfall last month after the UK was hit by storms and wet weather.

In sharp contrast to the panic buying now stretching most stores to the limit, the monthly BRC-ShopperTrak Footfall Monitor revealed that total UK footfall fell by two per cent year-on-year in February.

Shopping centres saw footfall slide by seven per cent for the month, while retail parks reported a 1.5 per cent fall.

Helen Dickinson, the chief executive of the British Retail Consortium, said: “Multiple storms took their toll on footfall this February, particularly for shopping centres and high streets. The decline was less marked for retail parks, which provide easy parking and offered some salvation from the rain.”

Ms Dickinson said the decline was not related to coronavirus, with the outbreak potentially leading to increased activity at the end of the month as customers stockpiled some products.

She added: “There was a slight boost in footfall in the final week, where concerns around coronavirus may have contributed to an increase in store visits.”