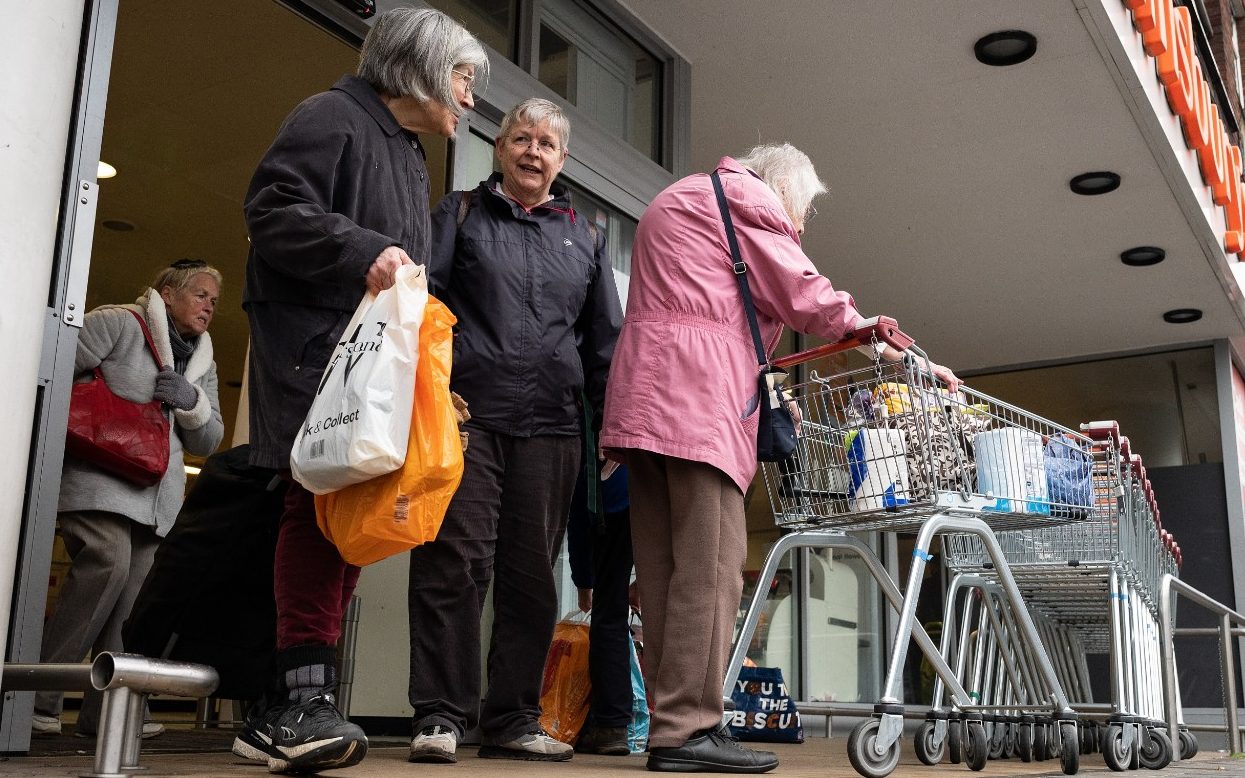 Supermarkets have been supplied with a list of 1.5 million vulnerable customers in the coronavirus crisis after the Government intervened to resolve a row over EU data protection laws which was causing delays.

The list of those who have been told to self-isolate for at least 12 weeks was drawn up by the Department for the Environment, Food and Rural Affairs (Defra) in order to allow supermarkets to target the most needy with online deliveries.

Officials were prevented from sharing the data immediately, however, because of restrictions under the EU’s General Data Protection Regulation, which prevents the mass sharing of private information including names, addresses and emails.

But on Friday night, supermarkets indicated that they had been provided with the list and were working to contact those identified as most in need.

Even with the information, however, it is feared thousands of vulnerable people could continue to go without vital food supplies because of continuing chaos in online delivery services.

Despite a major push by the biggest supermarkets, including Waitrose, Sainsbury’s and Tesco, to improve delivery services, some of those most in need are having to wait more than a month to obtain a delivery slot.

That means those who are able to get to a shop are having to ignore the Government’s self-isolation guidelines and visit supermarkets in person, increasing their risk of being infected with the virus.

In one case, a 91-year-old Army veteran recovering from heart surgery was forced to queue outside his local branch of Waitrose at 6.30am in freezing temperatures in order to buy food.

David Vetch, from Horley, in Surrey, said he had been trying for days to get a delivery slot but had eventually given up when his shelves began to look bare.

He said: “I had been reluctant to leave the house but, despite my best efforts, I was unable to get a slot for a home delivery. Therefore, against all Government advice, I broke my curfew and at 6.30 in the morning, in temperatures of minus two degrees, I queued outside our local Waitrose until they opened at 7am.

“I was then able to do a shop which should last me for the next couple of weeks, at which time I will again have to come out of isolation again unless I can get a slot. I am only too well aware of the difficult times in which we now live, but I am also aware that Government has instructed the elderly to stay at home, so perhaps supermarkets should be more considerate and helpful to the many people who, like me, should not go shopping.”

Another Waitrose customer explained that she had also had to visit the supermarket in person after being told the next available slot for a delivery was in June.

Chris Cooper, 71, from Fleet, Hampshire said: “Having self-isolated at home for almost two weeks, I was delighted when I received an email from Waitrose to say I had been identified as a vulnerable customer and would therefore be eligible for a priority slot.

“I went online immediately to book one, but was told the next available delivery was not until the end of June, by which point I would have starved. I am fortunate enough to be in a position to be able to go out and collect my shopping, despite the risk, but there are many others who will not have that option. I dread to think what will happen to them.”

Waitrose has increased the number of slots available but has admitted the current demand for online deliveries has been far outstripping capacity.

Sainsbury’s customers have reported similar issues, even though the supermarket last week wrote to 270,000 people it had identified as vulnerable to tell them they would have priority for future delivery services.

Garth McGowan, 75, from Cambridgeshire, has been warned that he is a high-risk person because he suffers from the lung condition called Chronic Obstructive Pulmonary Disease. But despite having shopped at Sainsbury’s for many years and having an online account, it is in his wife’s name. She is not in the vulnerable category, and therefore not entitled to one of the priority slots.

“We have significantly expanded our capacity and are doing our very best to offer home delivery to everyone who needs it. We are giving thousands of additional slots to customers over the phone every day, and urge anyone who believes they are eligible to keep trying.”

A spokesman for Waitrose admitted that demand was still outstripping capacity but added: “We’ve been working to increase capacity for Waitrose.com – by next week we’ll be running at 50 percent more slots than usual.”

The spokesman added that the firm had taken on hundreds of extra drivers to try and meet the increased demand, and said: “Currently, 50 percent of our slots are booked by elderly or vulnerable customers and we have been contacting such customers to offer them one.

“It’s important to note, though, that we knew when we started this we won’t have enough capacity for all those who wanted a slot – there is such high demand. We’re looking at what else we can do to reach customers who need us, including how we can reach those on the Government’s vulnerable list, which we’ve now received.”