Test and trace scheme has contacted fewer than half of those at risk of coronavirus, leaked report suggests 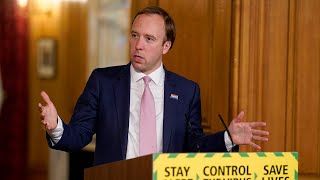 Under the system, anyone with symptoms of coronavirus is asked to immediately book a test. If found positive, they are asked to hand over details of anyone with whom they have had close contact.

They will then receive a text, email or phone call telling them to enter self-isolation for up to 14 days, and to book their own test if symptoms develop.

The Department of Health and Social Care (DHSC) said the figures were “outdated”, but refused to provide up-to-date data on Tuesday night.

Hours earlier, Mr Hancock had been rebuked by the UK’s statistics watchdog for providing inadequate data on testing, meaning it was “widely criticised and often mistrusted”.

The UK Statistics Authority chairman, Sir David Norgrove, said the data published by the Government was “still far from complete and comprehensible”.

He criticised the way in which the figures are presented at the daily Downing Street briefings, with the headline total including not only the tests carried out but also those which have been posted out for home testing but not yet conducted.

On Sunday, ministers boasted that they had hit a target to have capacity for 200,000 tests a day early.

But Sir David said: “The testing statistics still fall well short of its expectations. It is not surprising that, given their inadequacy, data on testing are so widely criticised and often mistrusted.”

Widespread computer failures on the day test and trace was launched meant many contacted tracers were locked out of the computer system that showed them the numbers they had to call. On Wednesday, staff – some of whom started last Thursday – told The Telegraph they had still not made a single call.