The inside story of Boris Johnson’s coronavirus battle 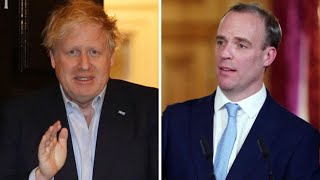 Nobody really worried too much when Boris Johnson first disclosed that he had contracted Covid-19 in a video posted on Twitter on March 27, least of all Johnson himself.

“Hi folks,” he said, striking an avuncular tone as though about to read the nation a bedtime story. “I want to bring you up to speed with something that is happening today. I have developed mild symptoms of the coronavirus.”

With his mobile phone in his right hand, filming his own address to the nation, Johnson was dressed for business, wearing a dark blue suit with an NHS badge on the lapel, a pale shirt and a red patterned tie.

For a man with coronavirus, there didn’t look or sound much wrong with him. But wind the clock forward seven days to the Prime Minister’s last on-screen appearance and the decline, even to the casual observer, was stark.

He was sitting in the same green leather chair (in the Chancellor’s study, which he had requisitioned while in isolation), but by now the jacket and tie had gone and his shirt was unbuttoned. His skin appeared blotchy and his voice, now croaky, gave way altogether at one point part-way through the 1 minute, 46 seconds of video.

“First of all in my own case, although I’m feeling better, and I’ve done my seven days of isolation, alas I still have one of the symptoms, a minor symptom. I still have a temperature,” Mr Johnson said, trying to play down his illness with his normal can-do optimism.

Two days later, he was taken to St Thomas’s Hospital, unable to shake off his symptoms – a persistent cough and high temperature – and, according to some reports, given oxygen to aid his breathing.

Why the coronavirus has affected the PM so badly while Matt Hancock, the Health Secretary, who was struck down with it at the same time and has since bounced back to work, is unclear. The virus clearly affects different people in different ways. But Mr Johnson, 55, is 14 years older than his Health Secretary and, rather than resting since becoming infected, has tried to plough on with running the country.

He has issues with illness, says his biographer and best selling author Sonia Purnell, who worked alongside him in The Telegraph’s Brussels office in the early 1990s.

“He has a very weird attitude to illness,” she said on Monday. “He was intolerant of anybody who was ill. Until now, he has had a very robust constitution. He has never been ill until now, and this will be a huge shock to him. His outlook on the world is that illness is for weak people.”

A senior Cabinet minister concurred. “Knowing Boris as I do he doesn’t believe in illness. Constitutionally we never get ill. So for him the fact that he has got it, he will be really angry about it and frustrated that he’s got it. His attitude will be ‘I’ve got to fight this.'”

Certainly, Mr Johnson does not appear to have taken coronavirus lying down. Since his diagnosis, he has continued to chair the 9.15am Cobra emergency meeting – the hour-long so-called “war Cabinet” that was set up to tackle the pandemic emergency.

But it became apparent as the days have worn on that he hasn’t been well. “In the meetings and conference calls when he was in isolation, there were a few times where he was coughing, he sounded under the weather,” said a Whitehall source. “You hear some really awful accounts of people who can’t talk or draw breath, but he definitely didn’t sound in that category.” A second source said: “He looks dreadful.”

Mr Johnson first developed symptoms on Thursday March 26, a day after he had held his weekly audience with the Queen by telephone, and was diagnosed the same day. That evening, a safe distance from Rishi Sunak, his Chancellor, he appeared at the door of Downing Street to applaud the NHS.

The next day, Mr Johnson dropped his first video bombshell but didn’t stop working. The same day he telephoned Donald Trump to negotiate a deal on ventilators. Details of the conversation were revealed by President Trump at a later press conference. “When I say: ‘How are you feeling?’ and the first thing Boris said to me is: ‘We need ventilators.'”

He was isolated to his flat in Number 11 Downing Street, his fiancee Carrie Symonds, who is pregnant, having moved out to their home in south London. Ms Symonds took their dog, Dilyn, with her.

Mr Johnson set himself up in a bedroom on the first floor with an ensuite bathroom, and with the use of the Chancellor’s ground floor study as his own. Meals were brought to the study and left outside the door. But he doesn’t appear to have rested as he perhaps should, trying to grapple with the greatest crisis since the Second World War while battling the virus at the same time.

On his first weekend with the illness, he wrote a letter to be delivered to every UK household, urging the nation to “stay at home”, and last Tuesday chaired the first ever digital-only Cabinet meeting with the 35 senior ministers and health advisers dialling in. For a well person, that would be a challenge enough.

On April 1, wearing a jacket, white shirt and sweater, he addressed the country a second time from isolation in a 3 minute, five-second  video. Two minutes in, he appeared to suppress a cough but remained typically upbeat, saying: “I want to reassure you that… although I am sequestered here in Number 10 Downing Street, I am – thanks to the miracles of modern technology – able to be in constant touch with my officials, with everybody in the various departments across the whole of Whitehall who is coordinating the response to coronavirus.”

The next day, April 2, Mr Johnson was out on the steps of Number 11, again applauding the NHS, delivering a thumbs up before turning his back and heading indoors. It is the last piece of video footage showing him outside.

Rumours began to circulate that he wasn’t well and wasn’t resting. “Some friends believe he needs a proper rest,” The Sun reported. “Boris has been working 15-hour days since the crisis began. That hasn’t stopped since he tested positive.”

The Prime Minister signed off the early release of 4,000 prisoners and remained at the helm as the daily death toll rose. He posted his final personal video on Friday and on Saturday was talking to Sir Keir Starmer, Labour’s new leader, about how they might work together to combat the pandemic.

The decision to agree to go to hospital will not have been taken lightly. Downing Street insists he remains in charge and that he has access to his Prime Ministerial red boxes. But that, of course, may just be the problem in his own personal fight against the disease.