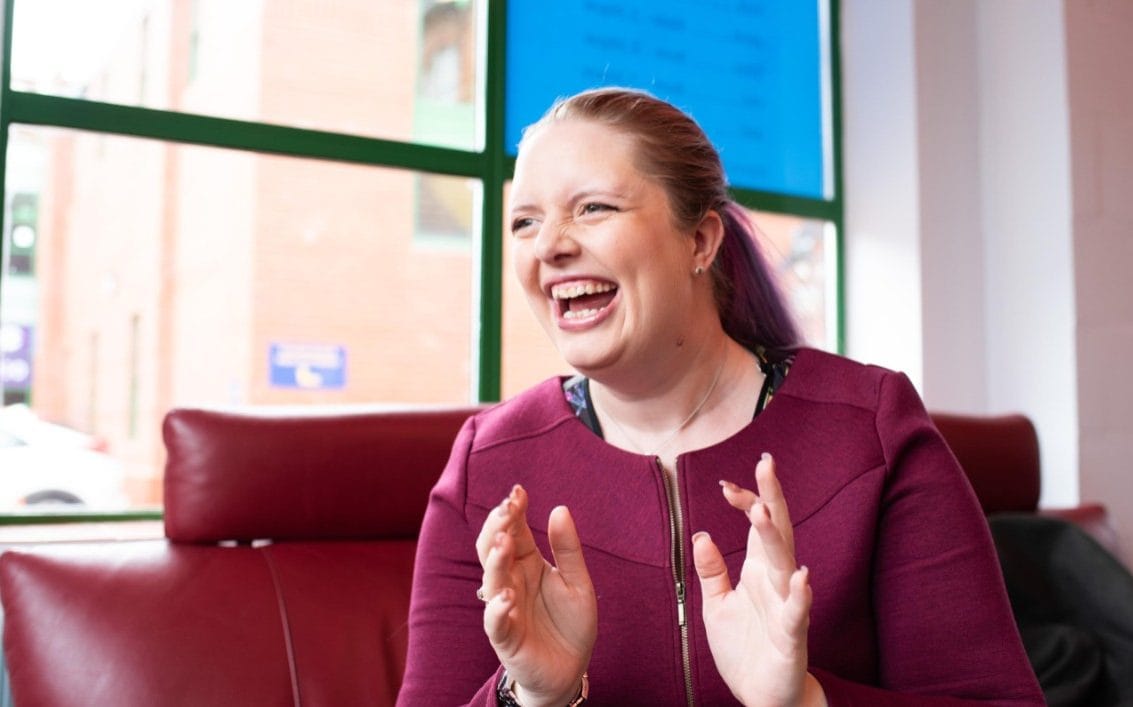 “It’s a natural, instinctive thing to want to communicate with other people,” says Vicki Frost, the creator of an app that enables people to talk to each other, regardless of whether they are blind, deaf or dyslexic.

The business has been so much of a success that less than two years after launching her business, she has been awarded with the Prince’s Trust Natwest Enterprise Award in a ceremony in London today.

Frost, 34, has been searching for novel ways to communicate all of her life. Her sister has Asperger’s syndrome and both her mother and brother are dyslexic, which meant that from an early age she had to think of different ways to get across her message. “Children are very capable of getting on with things and not letting language get in the way,” she says.

Her first experience of communicating with deaf people started in swimming lessons when she was around eight. “There was a deaf girl in the class with me”, explains Frost. “We found our own way to communicate – I don’t remember learning signs, we just got along.”

Perhaps unsurprisingly, she became interested in foreign languages at school, choosing to study French and German at GCSE. At lunchtime she requested extra lessons in Japanese from a teacher who knew it.  After school, she realised her passion was in communicating with deaf people, so studied a degree in interpreting British Sign Language (BSL) into English at the University of Wolverhampton.

After university, she began working as a sign language interpreter, first working for a company staffed primarily with deaf people. After a few years there, she went freelance, working on a huge range of things: “People think they know what interpreters do but they don’t: we do GP appointments, we go in the pool when deaf children go swimming, we’re there when deaf people have their scan to hear if they’re having a girl or a boy,” she says.

“I mainly specialised in community interpreting, which means advocacy appointments, medical appointments, education, and things like that.”

But not every job was so serious. “Last year, we had a deaf elf who would receive Skype calls from deaf children at the North Pole”, she says. “I was his interpreter in case what they said wasn’t clear or I heard things that he couldn’t see. The info was passed onto a deaf Santa, and they would receive a video from him saying ‘You’ve been a good boy or girl’, in sign language.”

Through her work, she realised there was a serious issue for deaf people in the UK. Many are not taught sign language early enough, she says, which leaves them “deprived” of the ability to communicate.

According to Frost, the focus for children with hearing loss is too heavily skewed towards helping them learn English, not BSL. “People don’t realise how much potential sign language gives somebody,” she says. “So if there is a child who can’t fully access English because they can’t hear and aren’t given access to sign language there are knock on effects in education, what they’ll get in exams.”

And so Frost had an idea for a business which she hoped could help to solve this problem. She could create an app which could scan QR codes put onto people’s bills, which would take them to a video of the information in sign language. She decided to also add subtitles and spoken language, so the app could also be used for people with dyslexia who struggle to read written documents, or with autism, who find it difficult to focus on the intention of the words.

She applied to the Prince’s Trust for funding, choosing them because they provided training and advice as well as a loan. It was a success: “I achieved the funding that I wanted, and with that I was able to set up my website and build an app”, she says. “The Prince’s Trust also gave me a mentor who would meet up with me and ask if I needed any support.”

Sign Connect launched in November 2018 and Frost says that the business is going well so far — she has been awarded the Prince’s Trust Natwest Enterprise Award, which honours sustainable businesses and social enterprises.

But her life has become incredibly busy as a result, especially when she is a single parent to two young children. “Being self-employed you never really switch off, emails and admin creep in after the children have gone to bed”, she says.

Her advice is to work out when you work best: “Are you a morning person or do you prefer to work late at night?” she says. Frost finds it easiest to do admin tasks first thing in the morning.

On top of this workload, she has chosen to study for a part-time master’s in BSL interpreting, which she studies for late at night. Many people would find this amount of work too intense. But not Frost.