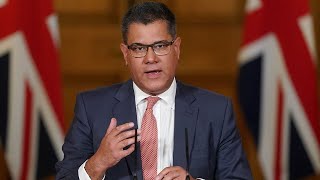 Cutting the rule to one metre would “significantly safeguard jobs”, the trade body told The Telegraph.

Chief executive Kate Nicholls said: “Opening with a two-metre social distancing rule would see many venues operating at around 30 per cent capacity, which would be completely unviable for almost every business.

“Reducing the distance to one metre would allow businesses to operate at around 70 per cent capacity, which might allow them to at least break even.”

Asked about the draft guidance, a spokesman for the Department for Business, Energy and Industrial Strategy said: “We are working at pace to develop safe ways for pubs, restaurants, bars and cafes to reopen at the earliest opportunity it is safe to do so, through our pubs and restaurants taskforce.

“This work is progressing well, bringing together representatives from the industry to develop guidance as we have done for other businesses and sectors.”

Pub landlords have welcomed the apparent change in policy. Stosie Madi ,who runs the Parker’s Arms in the Ribble Valley, Lancashire, said: “A 2m rule cuts our numbers by 50 per cent, it’s not fair for anyone especially not for our industry.

“The general public would like some guidance on what would be safe, but we know that more than 1m is going to be very bad for us, we will not be able to make a profit, keep staff or employ people if we only have a 2m rule.”

Heath Ball who runs the Red Lion and Sun in Highgate added that he believed the rules would become ‘self-policing’, and explained: “They seem to be saying now off you go, do what you like, we want people to go back to work so we can stop paying furlough.

“The onus should really be on the customer, if you are concerned then don’t go to a pub, most pubs in this country can’t afford to operate with reduced numbers. It is at their own risk.”

The spokesman added that all public health guidance is under constant review to ensure that it reflects the latest scientific advice.

The Government’s ambition is to reopen pubs, cafes, bars and restaurants “from July 4 at the earliest, subject to the scientific advice at the time”.

On Tuesday, the Prime Minister’s official spokesman said the Government’s position was that the two-metre rule should “remain in place” but added that it would be kept “under review”.

Asked whether the rule had been discussed on Tuesday, the spokesman said that Cabinet had talked about the “road map” that sets out the easing of lockdown measures.