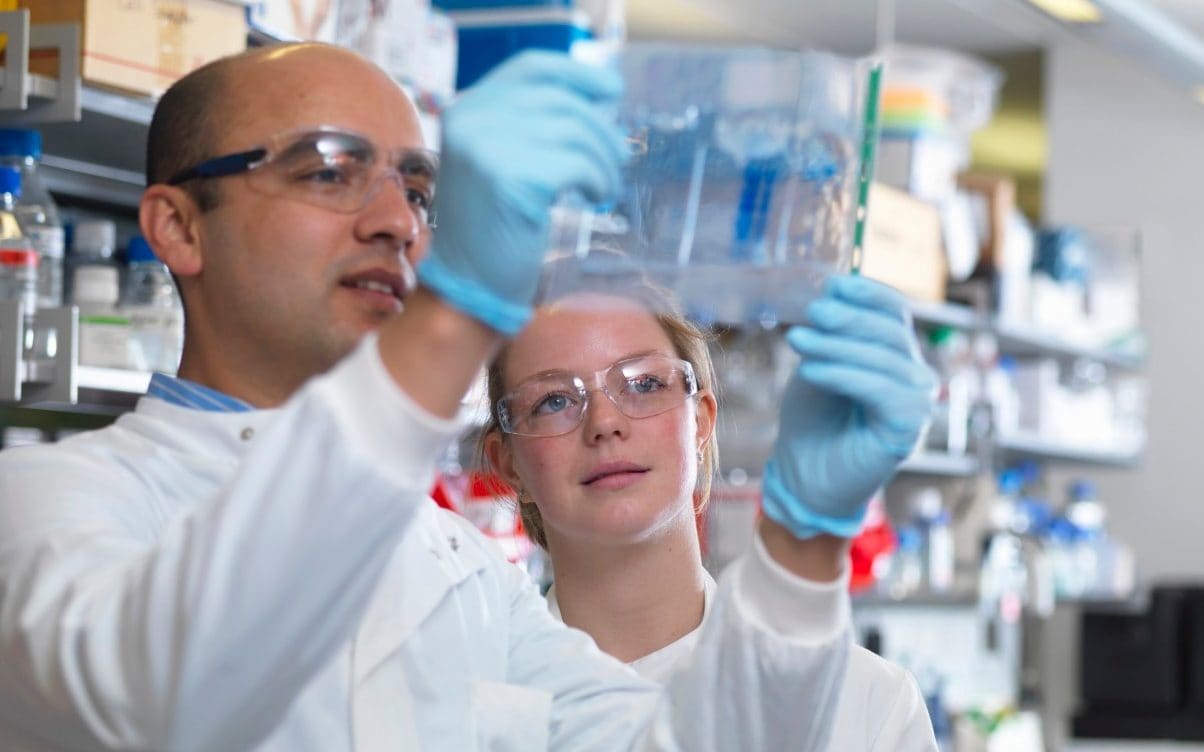 The UK has the scientific knowledge but not the manufacturing capability to mass produce a coronavirus vaccine, experts have warned.

Around the world there are clinical trials of coronavirus vaccines in the pipeline, with the World Health Organisation citing at least 20 vaccines in development and some laboratories hoping to have an immunisation ready for regulatory scrutiny in time for the end of the year.

Oxford University researchers are working on a coronavirus vaccine with testing on animals already underway at the government’s science centre in Porton Down.

But experts have warned that while the UK is a leader in vaccine science, it is severely lacking in manufacturing facilities to mass produce the vaccines.

The UK only has two major vaccine factories, both near Liverpool, run by AstraZeneca and Seqirus. GSK, meanwhile, does not manufacture vaccines in the UK, instead making the bulk of its output in Belgium.

Industry groups suggest that as much as 80pc of pharmaceutical ingredients are produced in China and India and, even elsewhere in Europe, other countries have more facilities. In France, Sanofi alone has three production sites for vaccines.

Experts said the number of pharmaceutical companies working on different types of immunisation is a hopeful sign, but a “bottleneck” can occur when it comes to manufacturing vaccines on a large scale, which could leave the UK at the back of the queue when it comes to rolling out an immunisation against coronavirus.

Dr Al Edwards, associate professor of biomedical technology at the University of Reading, said: “One of the biggest problems with having so many different vaccine candidates is each one of them will have a completely different factory that’s needed. For example, in the UK we don’t have a large number of vaccine factories.

“That’s something we should have done a long time ago, to make sure we have a national vaccine manufacturing facility. In theory we do, but the reality is that it’s not remotely capable of producing a large amount of vaccine”.

“If a country has a factory to make a vaccine the first people that will have that vaccine will be their citizens and their healthcare workers and vulnerable people. It’s not even really about intellectual property or patents, it’ll come down to who owns that vaccine.”

Dr John Tregoning, reader in respiratory infections at Imperial College London, said: “[We need] more investment in pandemic preparedness, so that might mean manufacturing capability in the UK for vaccines. That might mean more ITU beds that are not normally used.”

Dr Darshna Yagnik, an immunologist at Middlesex University, said it will take a global effort to manufacture a vaccine to ward off the virus.

“[The UK] might be able to work on the genetic code and then tell [other countries] this is exactly what the vaccine needs. At the moment this is a global pandemic so everyone will be involved”.

“The Chinese have been amazing, they’ve shared the genetic code [of the virus], they’ve sent it to researchers and I know groups are working together in the US, China and Europe as well. We’ve got all the best scientists and scientists really do talk to each other because we know that everybody has a different expertise and most of us work for the greater good”.

Oxford University’s Jenner Institute recently announced that its researchers are working “with great care, and due haste” to develop a coronavirus vaccine. Production is underway and clinical trials on humans could start next month.

The vaccine is made of a live virus that cannot reproduce, with a section of genetic code taken from the coronavirus. The hope is that the genetic code will train the body to attack the virus.

Another vaccine in development, from the German pharmaceutical company CureVac, has been in the spotlight recently after President Trump reportedly offered a large sum of money for exclusive rights to the vaccine, prompting outrage among German ministers.

The company has denied these reports. CureVac’s mRNA-based vaccine differs from a traditional vaccine in that it does not include a weakened part of the virus but instead spurs cells into producing antibodies against the virus.

There are many vaccine candidates in the United States. Moderna Therapeutics has begun testing on humans using its mRNA vaccine, skipping the normal procedure of testing on animals first. Four patients received the jab at the Kaiser Permanente research facility in Seattle last week.

US biotechnology company Inovio Pharmaceuticals is rapidly developing a DNA vaccine based on a genomic sequencing of the virus created by Chinese authorities. Inovio has already carried out animal trials with the vaccine and hopes to test it on human volunteers from April.

Dr Kate Broderick, senior vice president of research and development at Inovio, said the global effort to create a coronavirus vaccine is developing rapidly. “In my whole career I would say I’ve never experienced anything go as fast as the vaccine for COVID is going,” she said.

DNA vaccines can be developed quicker than traditional vaccines, Dr Broderick said, and the company aims to have 1m doses of its vaccine ready by the end of the year. However, no DNA or RNA vaccines have been approved for use.

Sanofi, a French multinational pharmaceutical company, is working on a vaccine in the US in collaboration with the US government. It is using previous work to create a SARS vaccine to try and quickly develop a coronavirus counterpart. The company aims to start clinical trials within a year and a half.

In less urgent times it can take up to 20 years for a vaccine to be widely available. But in the rush to combat coronavirus pharmaceutical companies are hoping to cut these timelines down to 18 months in some cases. This sped-up process comes with its own concerns about cutting corners, but experts are confident this can be done without sacrificing safety.

Dr Edwards cites the Ebola outbreak as a good example of the scientific community responsibly speeding up certain parts of the sign-off process.

“In the Ebola outbreak some years ago the story was that in less than a week people put together an emergency ethical approval proposal, it got sent to various people who all read it very quickly over the weekend and they concluded it was fine to go ahead.

“A process that would normally take six months or a year is suddenly condensed down to a week. And that’s exactly what’s happened with this particular outbreak – people are primed and ready to say this is an emergency situation, normal rules can be condensed.

“We still have the process in place but we’ve had a go and we’ve seen which bits can be cut. It’s this amazing acceleration.”