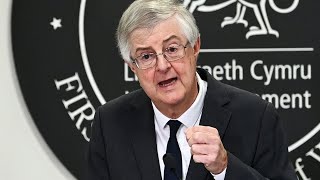 Despite a growing number of hospitalisations, the infection rate in Wales is still lower than that in England.

The rate of positive coronavirus cases stands at 130 per 100,000 over seven days in Wales, while England’s weekly average is at 165. However, the daily death rate in Wales now outstrips that in England, with 2.6 deaths per million compared with 1.6.

The Welsh lockdown will begin at 6pm on Friday and last until Monday November 9. Everyone will be required to work from home, with the only exemptions being for key workers and those in jobs where it is impossible to do so.

People will be banned from mixing with other households indoors and outside unless they are in a “support bubble”. Community centres, libraries and recycling centres will close, while places of worship will also be shut other than for funerals or wedding ceremonies.

The measures in the 17-day “circuit-breaker” contrast with those in place elsewhere in Europe. In the Netherlands, currently under a strict four-week lockdown, a maximum of three people can visit a person’s home per day and up to four can meet outside.

Mr Drakeford has written to Rishi Sunak, the Chancellor, to ask him to give Welsh businesses early access to the new, expanded Job Support Scheme from Friday. If Mr Sunak grants the request, it means twice as many people in Wales could claim furlough as in England.

The three million-strong population of Wales is more than twice the size of Merseyside, the only major district currently under Tier 3 restrictions and thereby eligible for the support.

Small and medium-sized firms forced to close in Wales will also be able to apply for one-off grants of up to £5,000. Childcare facilities will stay open, with primary and specialist schools reopening as normal after the half-term break. Secondary schools will only reopen for children in Year 7 and Year 8 and those with specialist needs.

No gatherings will be allowed outdoors, meaning no Halloween or Bonfire night celebrations, but there will be an exception made for organised Remembrance Sunday events.

There is speculation that England could soon follow Wales’ lead and bring in a “circuit breaker” ahead of the half-term school holiday.

However, Robert Jenrick, the Housing Secretary, played down the suggestion on Monday, saying: “The argument for a national circuit-breaker is not one that I, personally, find, at all persuasive.