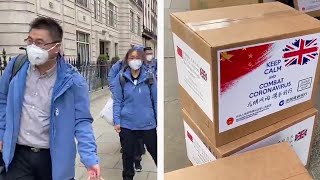 The coronavirus outbreak could be stifled by warm English May weather, a new study from UCL has suggested.

Researchers found that infections from three common coronaviruses followed a seasonal pattern in England, with large numbers occurring during winter and at roughly the same time as influenza.

Cases peaked in February but only small amounts of the virus were transmitted in the summer months, with infections dropping rapidly from May and not ramping up again until the end of the year.

“Our findings support the idea that, in the UK, we could see continued but lower levels of coronavirus transmission in the summer, but this may reverse in the winter if there is still a large susceptible population at that point,”  Dr Rob Aldridge, of the UCL Institute of Health Informatics, said.

The study – published in the journal Wellcome Open as a pre-print ahead of peer review – used data from the Flu Watch community cohort study, which tracked cases of influenza and coronaviruses between 2006 and 2011.

Covid-19 is caused by the new coronavirus SARS-CoV2 – but other related, yet less serious, viruses have been around in Britain for some time.

Study participants were contacted weekly to report any symptoms of respiratory illnesses and sent in swabs if they were ill. As well as flu, researchers found three coronaviruses in circulation during that period, with all following a similar pattern of seasonality.

Ellen Fragaszy, of UCL Institute of Health Informatics and the London School of Hygiene and Tropical Medicine, said: “In temperate regions, many respiratory viruses follow a seasonal pattern, with winter peaks during the ‘cold and flu season’.

“We believe this seasonality is driven in part by environmental factors such as temperature, humidity and sunlight which affect both virus survival and how well our immune systems can respond to these infections.

“Seasonality is also likely to be driven by our own behaviours, such as our tendency, when it’s cold, to spend more time indoors with the windows shut and in close contact with other people.”

The findings are in line with previous research in other countries, which showed that coronaviruses are seasonal in winter in temperate climates, with greater variation in tropical regions.

The team also looked at whether people were infected more than once to see if they had developed immunity. They discovered that nobody was reinfected by the same virus, suggesting people are unlikely to catch coronavirus again.

“We cautiously infer from this that we might expect there to be some levels of immunity after infection with SARS-CoV2, but we don’t know how strong, or long this will last,” added Dr Aldridge.

A separate review from Yale University also found that the cold, dry air of winter helps coronavirus to spread but, as humidity increases during spring and summer, the risk of transmission through airborne particles decreases both outside and indoors.

“Ninety percent of our lives in the developed world are spent indoors in close proximity to each other,” said Yale immunobiologist and senior author Dr Akiko Iwasaki. “What has not been talked about is the relationship of temperature and humidity in the air indoors and outdoors and aerial transmission of the virus.”