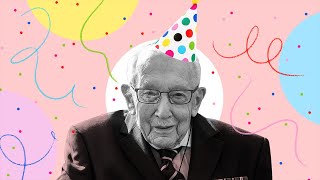 The WWII veteran set out to walk around his garden 100 times to raise £1,000 for the National Health Service and achieved his aim 30,000 times over.

“I think it’s an absolutely fantastic sum of money, you would never imagine sort of money,” he said.

“It’s unbelievable that people would be so kind to give that sort of money to the National Health Service. And maybe I was responsible for starting it, but not deliberately.”

Captain Tom has broken two world records, including his duet with Michael Ball which went straight to number one in the charts, and he now has a Royal Mail birthday postmark to his name.

The Duke of Cambridge described him as a “one-man fundraising machine”, while health secretary Matt Hancock said he was “an inspiration to us all”.

Born and brought up in Keighley, Yorkshire, Mr Moore went to Keighley Grammar School and later completed an apprenticeship as a civil engineer.

He enlisted into the eighth battalion of the Duke of Wellington’s Regiment (8 DWR), an infantry unit that had been converted to operate Churchill tanks as part of the Royal Armoured Corps (RAC).

Selected for Officer training in 1940, he rose to the rank of Captain and served in 8 DWR (145 RAC), later being posted to 9 DWR in India.

He served and fought on the Arakan, western Burma – nowadays renamed Rakhine State – and went with his Regiment to Sumatra after the Japanese surrender.

He is well placed to speak about the virtues of the NHS – he has received treatment for skin cancer and, more recently, a broken hip.

“The service I’ve had from the National Health Service is absolutely marvellous,” he said.

“They’ve been kind and attentive. Everything you can say good about them, I can say about the National Health Service.”

Ellie Orton, Chief Executive of NHS Charities Together, said: “The difference that this is making is firstly it’s going straight to the front line of the NHS. The staff, the volunteers, the patients and supporting them.”

He has inspired others to take difficult steps too – like Margaret Payne climbing her stairs 282 times, the equivalent of climbing Suilven.

Or former Scotland rugby captain Mike Biggar taking 100 steps, despite suffering severe brain injuries in a near fatal car crash 30 years ago, and six-year-old Frank Mills, who is not letting spina bifida get in the way of his 10 metres.

Captain Tom has been sent over 120,000 birthday cards, all displayed at a local school.

As his daughter Hannah Ingram-Moore puts it, “the nation has taken [his story] to their hearts”.