Wear a face mask if you’re in a queue, says Boris Johnson 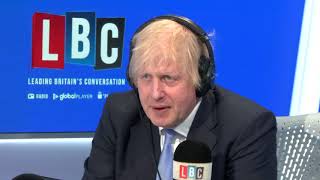 Mr Johnson then produced a mask that he said was “a bit Hannibal the Cannibal” – the character played by Sir Anthony Hopkins in the film The Silence of the Lambs. He said it was “a Florence Nightingale face mask which looks pretty scary when I put it on”.

But it says that, “if you can”, people should wear a covering in “enclosed public spaces where social distancing isn’t possible and where you will come into contact with people you do not normally meet. This is most relevant for short periods indoors in crowded areas”.

Ms Sturgeon announced this week that face coverings would be mandatory in shops from July 10. She said using coverings, which are already mandatory on public transport, could “help reduce the risk of transmission indoors” and “provide an additional layer of protection”.

“We have proceeded for a period with a voluntary approach to this,” she said. “Some people are complying and some are not. I’m not pointing fingers or trying to blame people for that, but we have to make a judgement if we’re heading into a period where more people are interacting.

“And we’ve been having a discussion with more sectors, like retail, about reducing distancing, and that increases the importance of mitigations like face coverings.”