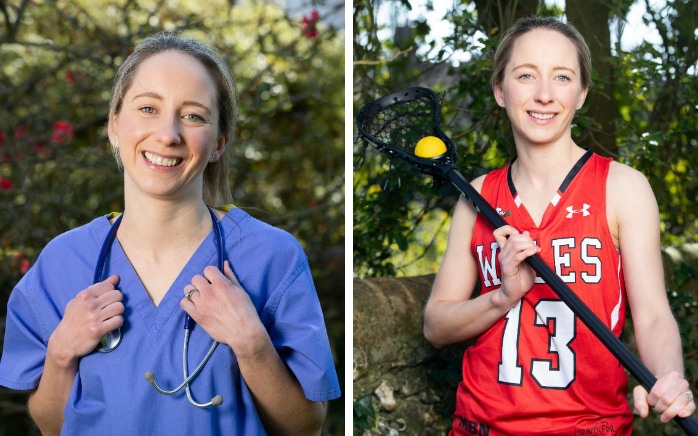 Eleanor Gaastra has been training relentlessly over the past few weeks. Each day has a regimented rhythm between work, rest and recovery. The Wales lacrosse captain, however, is not preparing to lead her country out into battle against England and Scotland, which had been scheduled for next week. She is working tirelessly in her role as an intensive care doctor to prepare for the fight against the coronavirus pandemic.

Speaking to the Telegraph between shifts at Salisbury District Hospital she said: “We are expecting more cases in the next weeks, it has been a slightly different atmosphere in that we are doing far fewer routine operations. We have been preparing the hospital for the increased pressures of intensive care. It does link into sport in that we are training for something.”

Gaastra, who is a specialist registrar anaesthetist, is not one for self-aggrandisement. She certainly is not keen to be described as a hero as those working in the NHS frequently are at present, but she does have a special skill that some during this unprecedented global crisis would describe as a super-power.

In her role as an anaesthetist working in intensive care, the 31-year-old Cambridge graduate is particularly in demand as operating a ventilator is part of her day-to-day role. Gaastra is keen to emphasise how her role in the hospital has been aided by what she has learnt on the sports field as she trains junior doctors who may be unfamiliar with the intensive care environment. “What I think is one thing sport has given me is that when I am on the pitch, I am quite a supportive player. I think that is going to be key going forward with the coronavirus,” she explained.

“I am going to be supporting other doctors who might be outside their comfort zone. We will see junior doctors re-deployed to other areas. Some who might not usually work in intensive care will be working with us, so it is really important to support them in their roles and to teach them.

“As anaesthetist and intensive care doctors we are in the spotlight now because our day-to-day job is putting people on ventilators for various reasons. A ventilator is a machine that helps people breath – either breath for them or gives them extra help breathing. We would usually be the doctors people look to, to put people on ventilators. That is why we are going to be particularly important in this scenario we are going into.”

Yet while this technical element of her role is a priority, Gaastra believes the biggest challenge will be the emotional one. She describes the environment in intensive care as “compassionate” and her voice breaks as she explains that she and her colleagues will not be able to physically embrace families or patients at times of consolation or reassurance.

“We would often be delivering good and bad news in intensive care and we will often be the people that give the mother or father or husband or wife a hug. If a patient dies in intensive care, the nurses cry with the family. They are very involved with them, so it is going to be incredibly difficult for us as a specialty and as a profession,” she said.

“A big part of intensive care is not only looking after the patient but the family, as well. That is key for us, keeping them in the loop about what is going on and I think that will be a really big challenge for us with coronavirus.

“Various local hospitals have different policies but visiting will be restricted and we will be communicating a lot more with families by phone, which is difficult. That is probably what will be the hardest thing, not being able to support the families as much as we normally would.”

Despite this psychological weight, which looms over Gaastra and her colleagues as they await more seriously ill patients, she is resolute that she remains positive. She explained that lacrosse training has had to go by the wayside in favour of runs with her husband Ben, who is a neurosurgeon at Southampton General Hospital in order to look after their own well being. “My husband is very supportive because he understands the pressures of medicine, high stakes decisions and stress,” she said.

“We usually debrief our shifts by going on a run together which we are still managing to do.

“Everybody in the country’s life has changed. The focus is obviously on coronavirus and so it should be as global pandemic. So, my focus has changed too, lacrosse has currently been put to one side. Our major championships are cancelled and my main focus is to look after my patients and then I must look after myself, so my most intense training, which is very sport specific, has stopped. My training has now changed more to help maintain my physical and mental health, so I can stay healthy for my patients.”

Although sport seems somewhat secondary now, many would be shocked to learn that Gaastra and her Wales teammates, who are currently the fifth best side in the world must pay to represent their country and the team is in search of a sponsor. “While we try to have as professional a set up as possible, we all dedicate huge amount of time and our own money as well, there isn’t much funding for women’s sport but particularly for lacrosse,” she said.

“The fact that we pay to play is a big part of what we do and it is a shame that we have to constantly have to think about the cost of what we are doing as well.”

Although Gaastra grew up in London, she qualifies to play for Wales via her mother, a native of Merthyr Tydfil. She now constantly uses her experience of playing in three World Cups to prepare for what will be arduous few months ahead. “There are quite a lot of similarities between being an anaesthetist working in intensive care and captaining your country. I have the responsibility to lead the theatre team, it is like being part of a sports team in that sense,” she said.

“Everybody does have their specific role to play. We work a lot in intensive care and anaesthetics about flattening the hierarchy, making sure that anybody can raise concerns, that everybody has an important role to play. So, while we have leadership roles and team player roles, we try to make sure every role is as valued as others. Communication is key in sports teams and in medical teams. It is a big thing that we work on. We do a lot of practice and training on how we communicate with each other, especially in emergency situations.”

Comfort has come at these testing times in form of the support from those across the country who clapped for NHS workers on Thursday night but Gaastra has the added support of her lacrosse team-mates who will be cheering her from afar. “Just even having their support through all this has been huge,” she concluded. “We are a sports team, we support each like we are family. I have played with some of these girls since I was a teenager, I am very lucky to have them at this time.”