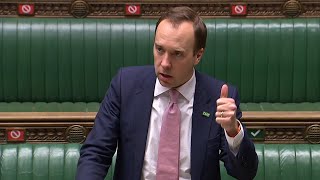 “We must assume and prepare for the fact that this is not a discrete one-off episode,” he said. “My belief is that this is now an endemic human infection. It is likely that this is here with the human race for the future. We’re going to have to find ways to deal with that.

“The real moving forward is we have to have new tests, we have to have drugs that treat this infection, and critically we need to have vaccines so we can prevent what we should assume are future waves.”

In recent weeks, journalists have questioned why the Government is continuing to invest in huge numbers of intensive care beds at Nightingale hospitals while cases are on the decline.

The possibility of a second peak is likely to be the reason.

While the current epidemic appears to have stabilised below 1,000 cases a day, modelling of a second wave suggests that it could be far higher if it is not brought under control through mass testing, contact tracing and isolation after lockdown.

Fears of a second coronavirus wave have made governments around the world nervous about lifting their lockdowns too early and too quickly, and Britain is no exception.

A safety net of widespread testing, contact tracing and isolation of those infected must be in place to ensure cases are not allowed to rise, while “squashing the sombrero” of a second peak may now be a viable option.

Ilan Kelman, professor of disasters and health at University College London said: “A second peak of infection could be manageable if we protect those who are vulnerable, treat those who get sick, do not reduce other medical services and meet all healthcare worker needs.

“Another possible strategy is a staged stand-down of lockdown to flatten a second peak, provided that those who are told to remain in lockdown, or who cannot work because of it, are given all the support they need to avoid difficult effects of being isolated while others resume life.”

In China, a spike in infections after weeks of falling rates has forced the authorities to impose new restrictions.

In the north-eastern city of Harbin, a 22-year-old university student who returned from the US was identified as the source of more than 40 new infections, while Chinese citizens returning from Siberia via the border town of Suifenhe led to more than 400 confirmed new cases.

The examples show the huge problem in restarting life again after a strict lockdown when so few of the population are immune.

In Germany, credited with keeping its outbreak under tight control through its use of extensive testing and contact tracing, there has been a rise in deaths as the country was re-opening some small shops and preparing for children to return to school from May 4.

The director of the US Centers for Disease Control and Prevention warned on Tuesday that any second wave of coronavirus was likely to be even more serious if it coincided with the start of flu season.

Robert Redfield told The Washington Post: “There’s a possibility that the assault of the virus on our nation next winter will actually be even more difficult than the one we just went through.”